Review - - Something in the Heir

Something in the Heir: A Novel
by Suzanne Enoch
Publisher: St. Martin's Griffin
Release Date: September 20, 2022
Reviewed by PJ 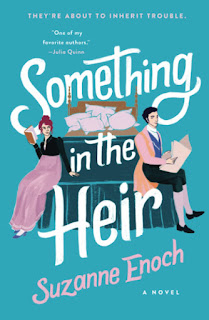 Smart, capable heiress Emmeline Pershing will do anything to keep her beloved home; and all it takes is an arranged marriage and a teeny white lie to fulfill her family’s silly inheritance rules. But now her little fib means that she and her completely unsuspecting husband are going to inherit big — and very messy! —trouble.Emmeline and William Pershing have enjoyed a perfectly convenient marriage for eight years. Their relationship is a seamless blend of their talents and goals. They’ve settled into separate, well-ordered lives beneath the same roof, and are content to stay that way—or so Emmeline thinks. And if William has secretly longed for a bit more from the woman he adores, he’s managed to be content with her supreme skills as a hostess and planner, which has helped him advance his career.Then when Emmeline’s grandfather, the reclusive Duke of Welshire, summons them both for his birthday celebration and demands they bring their two little angelic children, William is stunned to discover that his very proper wife invented not one, but two heirs to fulfill the agreement for living at Winnover. But surely if Emmeline and William team up and borrow two cherubs to call their own, what could go wrong? Enter George, age 8, and Rose, 5—the two most unruly orphans in Britain.As the insanity unfolds, their careful, professional arrangement takes some surprisingly intimate turns as well. Perhaps it takes a bit of madness to create the perfect happily ever after.
PJ's Thoughts:
The first thing you should know before reading this book is that it is not a historical romance. Rather, it is a historical rom-com. Yes, there is a main couple (Will and  Emmie) and their feelings for one another are at play in the progression of the plot, and there's an endearing, smile-inducing, happy ending, but their relationship is not the core focus of the story.
On the surface, this is a light-hearted, humorous romp with plenty of laughs along the way but if you look below the surface it's a bit more. I don't know if the author intended those deeper messages amidst the laughter but I took them away nonetheless. First, there's the privilege of Will and Emmie and the assumptions that come with that: that they are somehow doing orphaned Rose and George a favor by bringing them into their home, buying them pretty clothes, teaching them manners, educating them, making sure they have soft beds, plenty of good food, safety and security...then sending them back to the orphanage in eight weeks when their usefulness expires. Or that Rose and George, reformed (somewhat) petty thieves, are the ones in need of transformation when it's their "betters" who have been and continue to be the ones perpetuating the con. Will and Emmie aren't bad people; let's call them misguided. It's clear that they've never looked beyond their privilege to wonder what life is really like for those not of their class. Needless to say, Rose and George provide them with eye-opening, life-altering revelations that shake the foundation of their beliefs and lead them to new, and better, versions of themselves. It was interesting to watch all four characters slowly evolve over the course of the story as emotions are engaged and lessons are learned - and taught - and not always in the way one would assume.
One might expect Will and Emmie to be driving this story, and they do in parts, but it's clear from the moment they hit the page that Rose and George are the stars. Wise beyond their years, fiercely loyal to one another, and hungering for love more than they will ever admit, these two little scamps steal every single scene they're in, leaving laughter, exasperation, confusion, and affection in their wake. I adored them. It's pretty obvious from the beginning how it will all end but the fun is in the getting there, with plenty of twists, turns, and shenanigans along the way. I especially enjoyed the (secret) battle of wits between George and Rose and the household staff.
If you're looking for a humorous, uplifting diversion, with a happy ending, if not the romance usually found in her books, give Something in the Heir by Suzanne Enoch a try. It's a fun ride.
Posted by pjpuppymom at 5:30 AM