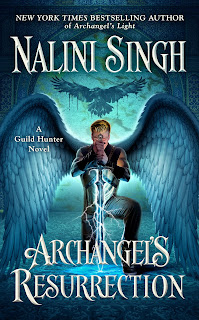 For thousands of years, the passion between Alexander, Archangel of Persia, and Zanaya, Queen of the Nile, burned furious and bright, seemingly without end. But to be an archangel is to be bound to power violent and demanding. Driven by its primal energy, Alexander and Zanaya fought as fiercely as they loved, locked in an endless cycle of devotion and heartbreak. It is only Zanaya’s decision to Sleep that ends their love story. Eons later, the Cascade of Death wakens them both. The passion between them a flame that yet burns, Alexander and Zanaya stand together in one last battle against the ultimate darkness. But even a warrior archangel cannot win every war. Alexander’s scream shatters the world as Zanaya falls, broken and silent . . . only to rise again in a miracle that may be a devastating curse. For is it truly the Queen of the Nile who has been resurrected? Only one thing is clear: This is the last beat of their passionate, angry dance. The final song for Alexander and his Zani . . .
Nancy Says:

Three books ago, with Archangel’s War, Singh brought the arc of the power-maddened archangel Lijuan to its cataclysmic conclusion. The two books after that showed some of the effects of that cataclysm on the characters and the world. Archangel’s Resurrection continues that thread. It focuses on archangels Alexander ( sometimes Xander) and Zanaya (Zani). The story opens in New York during the battle against Lijuan. Lijuan attacks Zani, who falls from the sky nearly dead. Zani goes into Sleep, the restorative state of angels, and the story jumps back to Alexander’s childhood, including his loving parents and older brother, Osiris.

His family were scholars and expected him to be one too. Alexander, however, chose the way of the warrior instead. With his family’s support, he set about building that life.

We also learn some of Zani’s backstory and her development into a warrior angel. When she and Alexander meet, intense attraction immediately burns between them, but both walk away. Alexander is several thousand years older than Zani, and he thinks he would do her a disservice if he pursued her while she’s still finding her path. Zani was raised by her mother only because her father abandoned them, yet her mother remains obsessed with him. The last thing Zani wants is an obsessive love.

They do eventually come together about twenty percent of the way through the story. Their relationship is as intense as they both expected but fraught with conflict. He wants commitment, and she’s determined to maintain her independence. They enter a cycle of passionate reunions eventually ending in quarrels and followed by long periods apart. The story explores the ways they both grow and change during those separations. While Singh often explores a couple’s separate lives, most romances don’t. There’s a further separation while one of the couple Sleeps, over the vehement protest of the other. The sleeper awakens just before the Cascade that presaged the war against Lijuan.

Alexander and Zanaya’s relationship has become famed among angelkind even though they’ve never been able to make it work. When Zani sleeps after Lijuan’s attack, Alexander is afraid he’s lost his last chance to resolve their conflicts. When she awakens, they’ve both changed and matured and try in a different way to make their relationship work. They face problems, though, that are not of their making. Zani still bears the effects of Lijuan’s attacks, and the evil Lijuan loosed on the world is taking a new and unexpected direction.

Singh gradually shows us how Zani and Alexander have gained perspective through their experiences and have looked back at their relationship with new eyes.  The moments she chooses to illustrate their growth are poignant and had me cheering them on.

Some of the most emotional relationships in the book involve family and friends. As a child, Alexander was close to his older brother, Osiris, and admired him a great deal. Osiris gradually withdraws from his brother, and Alexander eventually discovers changes in his brother that force him to make a painful choice.

Alexander is also very close to his grandson and namesake, Xander, whose father and mother were killed by Lijuan. Zanaya is not Alexander’s mother. He was conceived when she and Alexander were not together.

Zani isn’t close to her mother, but she’s very close to her mentor and to her two closest friends. Alexander’s closest friend in his youth is archangel Raphael’s mother, Caliane, and we see how her period of madness grieved him. He and Raphael have an interesting dynamic.

Singh does a great job of showing the horrible effects of Lijuan’s madness in different books featuring different characters without being repetitive. The title of Archangel’s Resurrection is very clever because another archangel injured by Lijuan’s evil has an unsuspected part to play.

My one problem with this book is that the romance feels a little disjointed. The cycle of intense passion followed by separation is handled well, but every separation interrupts the arc of the romance. The forward progression stops and then starts again. Otherwise, I thought it moved at a good pace, and I was rooting for the characters. It’s an excellent installment in the series.