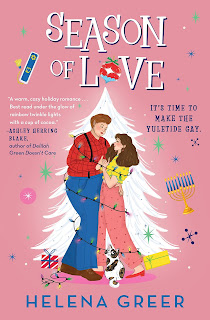 Thanks to her thriving art career, Miriam Blum finally has her decoupaged glitter ducks in a row—until devastating news forces her to a very unwanted family reunion. Her beloved great-aunt Cass has passed and left Miriam part-owner of Carrigan’s, her (ironically) Jewish-run Christmas tree farm. But Miriam’s plans to sit shiva, avoid her parents, then put Carrigan’s in her rearview mirror are spoiled when she learns the business is at risk of going under. To have any chance at turning things around, she’ll need to work with the farm’s grumpy manager—as long as the attraction sparking between them doesn’t set all their trees on fire first. Noelle Northwood wants Miriam Blum gone—even if her ingenious ideas and sensitive soul keep showing Noelle there’s more to Cass’s niece than meets the eye. But saving Carrigan’s requires trust, love, and risking it all—for the chance to make their wildest dreams come true.
Santa Says:

Season of Love by Helena Greer will light up your holiday cheer faster than you can unravel last year’s Christmas lights! I am an unabashed holiday romance reader and will gobble up new ones and revisit them year after year. Well, this one had me at Sukkot. Let me backup here for a minute. What would a Christmas romance have to do with the Jewish holiday that takes place in the fall? I’m glad you asked because that is where Season of Love starts, in the Fall at Carrigan’s Christmas Tree Farm owned and operated by our heroine’s Jewish family. And also, because it’s so much more than just another holiday story. There are so many levels of character and depth in this book and Helena Greer writes them masterfully. This debut author is one to keep an eye on.

Miriam Blum, our main character, lives in Charleston and has made quite a name and presence for herself on the internet as an artist. Her devoted followers known as Bloomers have grown to such a degree that she is about to open her own brick and mortar storefront in Charleston. She has a lovely fiance Tara who is a successful lawyer from Charleston royalty. Cole, her best friend from college, is there for her whenever she needs him.

Everything is as it should be until she learns of her beloved Great Aunt Cass’ death. She drops everything and flies back to New York to sit shiva for seven days.  Her aunt owned a Christmas tree farm in the Adirondacks in upstate New York. She was catapulted back ten years when she dropped all family connections and ran away to Charleston. But she had only happy memories there at the farm. Her family celebrated Hanukkah every year there. Miriam spent summers there with her aunt, her best friend, and cousin, Hannah and the Matthews who ran the inn on the property. It had been her escape from an abusive and controlling father and her enabling and, seemingly indifferent, mother.

Her plan was to stay the seven days, avoid her parents at all costs and return to her life in Charleston. However, Carringan’s, her great aunt and the gorgeous, redhead named Noelle who manages the farm seem to all have different ideas on the matter. Her beloved aunt leaves Miriam part owner of the farm and as wonderful a woman as she was, Aunt Cass seemed to have left them in a bit of a financial bind. Miriam’s father rears his vile head, too. And it’s all hands on deck to vanquish old demons, save the farm and bring its magic into the twenty-first century with an online presence and a year round appeal.

There is an instant visceral pull between Miriam and Noelle but Noelle is resentful of her presence even as she works to help save a farm that has been a sanctuary for Noelle, as well. Miriam’s relationship with her fiance is put to the test by her lengthy absence  and doesn’t survive. As the story develops and we learn more about Noelle and Miriam we see walls crumble and bonds reinforced as they grow as a couple.

As I said, I am an avid holiday book lover. I am delighted to add this to my keeper shelf and will be rereading it for years to come. I hope you will enjoy it half as much as I have.

Posted by pjpuppymom at 4:30 AM