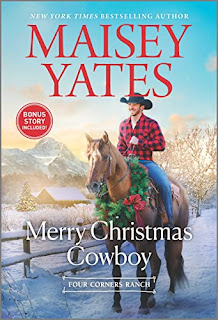 As the snow falls on Four Corners Ranch, all this untamed cowboy wants for Christmas is the family he’s never had…Cowboy Wolf Garrett is delighted his brother is happily married—really, he is. But time can never heal Wolf’s own wounds, so being surrounded by such marital joy is a bit…much. A trip to his extended family’s ranch in Copper Ridge seems the ideal change of scenery. Until he meets local innkeeper Violet Donnelly and realizes he’s exchanged one form of torture for another—trying, and spectacularly failing, to resist their instant, wildly hot chemistry.Violet knew Wolf was trouble the moment he walked into her inn. But it's a whole new level of trouble when she discovers that their secret nights have left her pregnant! Especially when she has six feet of gorgeous, furious cowboy demanding that she come home with him for the holidays and marry him. Wolf has lost more than she could ever imagine, but Violet believes in the power of love to heal, and she’ll do anything to give their future family a chance. Wolf has already given her so many firsts—dare she hope he’s about to become her first Christmas miracle too?Bonus novella included!
PJ's Thoughts:
Maisey Yates never fails to bring deep feelings to her stories and this one just might be one of her deepest. It's messy, emotional, angsty, and has a closed-off hero that I -more than once - wanted to toss off a cliff. He comes around in the end (of course he does) but, wow, the journey to that point is not easy.
Violet, on the other hand, is incredibly easy to like. She's upbeat, sweet, devoted to her family, and a loyal friend but she too has hidden emotional demons to work through. Her character growth is just as important as Wolf's and it was very satisfying to watch her take charge of her happiness.
The physical attraction between these two is never an issue, leading to several steamy encounters. What holds them apart is fear. For Violet, it's the fear of disappointing her father and stepmother, especially as she still struggles with her mother's abandonment when she was 13. For Wolf, it's a double-edged sword. Maybe triple-edged. His mother left when he was six, choosing her family over her child. His father was a cold man who never showed affection to his children and never made a commitment to a woman. Then there was the tragic death of Wolf's teenage love, a young girl frozen forever in time who holds his heart still. There's a whole lot of "stuff" he needs to work through before he'll ever be free to offer his heart to Violet. As I said earlier, it's messy, but I appreciate that Yates never allows her characters to take the easy way out. She makes them face their demons head on, have those difficult conversations, sometimes knocks them upside the head with 2 x 4 realization boards to open their eyes before finally guiding them to their HEA. It's not always an easy journey but it is - always - a satisfying one.
Merry Christmas Cowboy is the second book in Maisey Yates' Four  Corners Ranch series, with crossover characters from her earlier Copper Ridge: The Garretts series and Copper Ridge: The Donnellys series. Fans of those books will no doubt enjoy catching up with favorite couples while readers new to Yates should have no trouble enjoying Merry Christmas Cowboy as a standalone.
Have you read Maisey Yates?
Do you enjoy stories where the hero and heroine have messy emotional baggage to unpack?
Have you read any recently you would recommend?
One person who posts a comment before 11:00 PM, October 29 will receive a print copy of Merry Christmas Cowboy.
* U.S. only
* Must be 18
*Void where prohibited
Posted by pjpuppymom at 4:00 AM