Review - - Lady and the Scamp 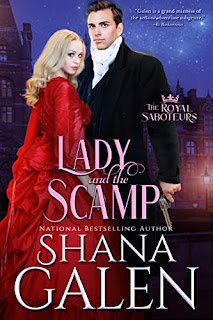 Willoughby Galloway was born to be an agent for the King and Country. His parents were two of the most celebrated agents of the Napoleonic Wars, but despite his illustrious parentage, Will hasn’t yet distinguished himself in the service of the Crown. He sees the Royal Saboteurs as his chance to show his true abilities and prove he is more than a pale shadow of his parents. When Will is assigned a mission to sabotage an assassin’s efforts to slay young Queen Victoria, the last thing he needs is a distraction. But then he meets the ethereal blond beauty, Lady Averley.
PJ's Thoughts:
Galen's new Royal Saboteurs series continues with another action-packed, suspenseful, and romantic series filled with twists and turns that kept me guessing...and flipping pages.
I'm enjoying how Galen takes fact and fiction, real people and characters from her imagination, and blends them together to form a story that rings with authenticity and believability. I never reached a point in this book where I could say, "Oh, I'm sure that never happened." Instead, there were several where I felt the need to hit up Google to confirm that events actually did occur. Her writing immerses me into the time and place of her choosing and convinces me everything I'm reading is real.
The mystery/suspense portion of this book is crafted in such a way that I was never completely sure who the traitor was until close to the reveal. It's always fun when multiple scenarios are still in the mix, with different suspects to keep me on my toes.
The romance between Will and Emily is a slow burn, allowing time to allay his suspicions and her skepticism. When it finally clicks in, things get steamy but in a way that's organic to their evolving and deepening feelings. I love that Emily isn't at all what Will expects. It's fun to watch her challenge his perceptions as she strengthens her confidence and value. When they finally achieve their HEA, it's a bit unconventional for what is typically expected of historical romance. However, it seems exactly right for this particular couple at this time in their lives. I have hopes, though, that Galen will allow readers to see how their marriage plays out over the years as the series progresses, or perhaps in a series finale epilogue as she did with her Survivors.
If you enjoy your historical romance sprinkled with danger, mystery, and a mix of fictional characters interacting with real people, give this book a try. It brings history to life in a relatable way while also giving readers the sigh-worthy romance they seek. I will definitely be back for book three!
Posted by pjpuppymom at 5:00 AM