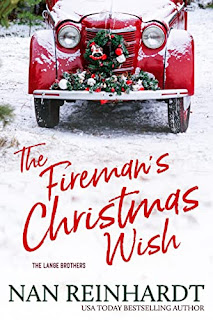 Her heart is wide open, but he’s nailed his shut.Preschool teacher Harley Cole has always viewed life through rose-colored glasses. With a career she loves, friends she enjoys, and a home that is her haven, there’s only one thing missing—finding her soul mate. As the holidays approach, Harley is inspired to help her former high school crush rediscover his holiday joy. It’s just a good deed...until the feelings she thought were gone come rushing back.Fire Chief Becker Lange returns home to River’s Edge with a heavy heart. His divorce has emotionally ravaged him, leaving him more confused than ever about what women want. So to protect himself from another failure, he closes his heart. And then Harley Cole makes him a flirty dare that she can help him overcome the holiday blues. Beck’s not sure he wants to, but Harley’s a hard woman to tell no.Can the magic of Christmas and a sweet stray kitten bring these two lonely souls together?
PJ's Thoughts:
A grumpy-sunshine romance is my Christmas reading wish and Nan Reinhardt's The Fireman's Christmas Wish delivers. This friends-to-lovers holiday gem kept me happily flipping pages from start to finish.
I love everything about Reinhardt's fictional town of River's Edge. I want to stroll the riverwalk, listen to music while sipping an excellent beverage at Four Irish Brothers Winery, sing carols and enjoy hot chocolate - with marshmallows - at the town's Christmas tree lighting, and spend time with characters who have become friends. Like the Lange brothers and the women who have captured their hearts. Those Langes: hot, deep, stubborn men. They don't fall easy but when they do...
Beck and Harley are characters who engaged my attention - and emotions - almost immediately. The chemistry between them is so obvious to the reader, if not to them. I love the friendship that has developed between them, a wonderful foundation upon which to build when those simmering romantic feelings begin to bubble. Their story brings an upbeat, humorous, sweetly romantic vibe as "Scrooge" Beck reluctantly allows Harley (who had to have been one of Santa's elves in a previous life) to drag him into Christmas events he has assiduously avoided since his divorce. It's so much fun to watch his bah-humbug personality gradually sweeten as he begins to remember all the reasons he used to embrace River's Edge's holiday traditions. And then there's the sweet, mischievous, tiny, abandoned kitten who claims his home and his heart. Plus, the guy bakes pies. Bakes! Pies! I mean, really, how could I not fall for him? Oh, I mean, Harley. How could Harley not fall for him? ;-)
There's plenty to smile about with Harley and Beck but the author wisely enrichens their story with complexities that also give them depth. There's the emotional baggage of Beck's failed marriage, Harley's deep desire for children of her own, plus family issues on both sides that bring complicated feelings into play. I love how both Harley and Beck are there for one another when things go sideways, bringing support, encouragement, and a safe place to land for the other. They may hit a few potholes on their way to a happy ending but these two are meant to be together. I know it, the author knows it, their families and friends know it, even the cat knows it, and now they know it too.
The Fireman's Christmas Wish is the third book in The Lange Brothers trilogy and the seventh book overall set in the town of River's Edge. Fans of the books will no doubt enjoy catching up with some of their favorite characters while readers new to River's Edge should have no trouble jumping in with The Fireman's Christmas Wish. Reinhardt recently announced that she'll be returning to this southern Indiana town for more heartwarming stories of laughter and love. I have to admit, I hope she never leaves!
Posted by pjpuppymom at 4:00 AM