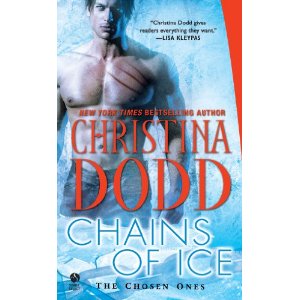 I’ve said this before but it bears repeating. Christina Dodd was born to write paranormal romance. In the books of The Chosen Ones, she has created a fascinating world where good versus evil, betrayal lurks around every corner, love, when it appears, is intense, steamy and will leave you breathless and where the future of the world rests upon the shoulders of seven unlikely individuals known as The Chosen Ones.

Once a vital member of  The Chosen Ones, John Powell turned his back on duty and escaped to the rugged Ural Mountains of Russia where he lives a solitary life, tormented by the guilt and grief of a mission gone tragically wrong. He’s vowed to never return to New York City, to The Chosen Ones, and to never use his Chosen gift, the gift that failed him and his team, again. But he doesn't know he's about to meet the one woman who will change everything.

Like a bear fleeing a swarm of mosquitoes, he shook his head and fled into the woods. But for the first time he couldn’t escape his thoughts.
What was he going to do when the Gypsy Travel Agency sent a representative to demand his return?
What was he going to do if Genny’s golden eyes mirrored her soul; if she was truly a dreamer, bright and idealistic?
He didn’t know either answer.
He wanted her. He wanted to slide his hands through her dark hair, kiss her warm, tanned skin, ravish her, worship her, teach her how a man who had abandoned civilization made love.
Yet if she was real, if the warmth in her eyes thawed the ice in his veins…then he would have to leave her alone.
Because he would destroy her…just like he’d destroyed all the rest.

When she was fifteen, Genny Valente’s world collapsed. Her father was fired for stealing priceless antiquities from his employer, The Gypsy Travel Agency, the company that funds and protects The Chosen Ones, her mother walked out and Genny was left at the mercy of a cold, bitter, vindictive father who, no longer in control of his own life, turned his focus to controlling her – his second chance at success.  Forced to study pre-law and business and accept a position with a company of her father’s choosing instead of becoming the veterinarian specializing in wildlife rescue that has always been her dream, Genny is shocked when, at graduation, her father’s gift is a trip to Russia to study the rare Ural Lynx but, of course, there’s a catch - a catch by the name of John Powell. In exchange for the “gift”, Genny must find this man who lives like a Yeti in the wilds of Russia and convince him to return to New York but when she arrives in Russia – when her soul is touched by the mysteries of the man and his surroundings – will she do as instructed or will she have the courage to finally break free of her father’s control?

Never in her life had she imagined she’d have the guts to hang up on her father. Ever since Kevin Valente had lost his job, he’d dominated her life, her thoughts, her ambitions. She’d been afraid of him, afraid he’d walk away as her mother had walked away.
But since she’d arrived in Russia, her soul had blossomed. She sensed the forest; she became a part of its darkness. She had seen the eagles and flown on the wings on wind. She had been sister to the father and mother lynx, guardian to the babies. She had found John; she’d tasted his torment, his desire, his being.
She thought – she hoped – she could make a difference to him. With him.
Maybe this place was magic. Maybe the crossroads did exist here.

Dodd takes John and Genny on a breathtaking, heart-stopping adventure where the wrong turn could bring deadly consequences, their love is put to the ultimate test and the future of the world hangs in the balance. The rest of The Chosen Ones play vital roles in the story, one suffers a serious injury and could be lost forever and a former Chosen One from John’s past returns to lead the team. But is he fighting for good? Or evil?

I read this book in one night then, the next day, I read it again. Dodd has created another compelling tale that engaged my senses, captured my mind and heart, and refused to let go. With intrigue, action, sensuous and steamy love scenes and the ultimate battle of good vs. evil, Chains of Ice is a book that I highly recommend.

Chains of Ice can be read as a stand-alone but, for a richer and more complete reading experience, I strongly suggest reading the books in this series in order: Storm of Visions, Storm of Shadows and Chains of Ice. The next book in the series, Chains of Fire, will be released September 7th.  I can't wait to find out what Dodd has in store for Samuel and Isabelle!

Posted by pjpuppymom at 9:09 AM