Review - - Three Nights with a Scoundrel

About halfway through Tessa Dare’s first book, Goddess of the Hunt, I thought to myself, “This woman is going to be a Star in the world of Romance Fiction.” Apparently others agreed because her second book, Surrender of a Siren (my favorite of the first trilogy) is a finalist for the coveted RITA® award at next week’s RWA National Conference. By the time I had finished the first two books in Dare’s new, and exquisitely written, Stud Club trilogy, I knew two things: the Star had arrived… and I didn’t like Julian Bellamy…at all. After devouring five of Dare’s books like a bag of Peanut M&M’s after a three-month diet, I found myself dreading Three Nights with a Scoundrel. I knew with absolute certainty that the writing would be lush and lyrical, the story sensual and compelling, the heroine likeable and the hero, sadly, would be the first of Dare’s with whom I would not fall in love. 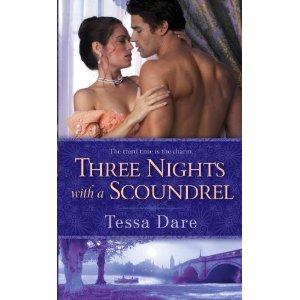 Born a bastard and reared in filth and poverty, Julian Bellamy now sets the standard of fashion for well-to-do young bucks of London. Arrogant, colorful and, seemingly, uncaring of what anyone else thinks, he systematically seduces his way through the wives of the rich and powerful men of London…or at least he did, until 5 months ago when his best friend, Leo Chatwick, Marquess of Harcliffe and founder of the exclusive Stud Club, was murdered. Convinced that he was the real target that night because of his secret, sordid past, Julian becomes obsessed with two things: finding, and dispatching the culprits, and protecting Leo’s twin sister, Lily, the woman for whom he has always felt much more than friendship but who can never be his.

Independent and pragmatic, Lily Chatwick has never let her loss of hearing from an illness determine the course of her life. An expert lip-reader, she's been able to navigate the waters of the ton with her brother's help though she’s always been happiest at home, with close friends and with her ledgers and accounts.  She's always counted Julian Bellamy among her friends though lately he’s been driving her crazy with his obsession of finding Leo’s killers and trying to marry her off, for her protection, but when an injured Julian is unceremoniously dumped upon her doorstep, Lily determines to put a stop to his reckless behavior before she’s forced to deal with his death too. She agrees to consider suitors among the gentlemen of the ton but only if Julian promises to assist her as her escort for three nights of her choosing, during which time she hopes to reclaim her friend and save him from his self-destructive ways.  But the rules change when Julian comes face to face with his jealousy over Lily’s appeal to other gentlemen and Lily's eyes are finally opened to the reason for the intensity between them.

So prescient of her parents, giving her that name. L-sounds were among the easiest to lip-read. The trouble was, the shape of her name always looked a bit silly to her. Especially with her honorific attached: “Lady Lily.” Two ls were bad enough, but three were ridiculous. All that tongue-flapping made her want to giggle.
But when Julian spoke her name, it never looked like a joke to her. No, it looked vaguely…naughty. Sensual, not silly. She’d always loved watching her name on his lips.
Always.
The word seeped down into her bones, into her soul, where it simply…fell into place. Like the moment of triumph she felt after scouring a ledger a dozen times and finally finding the six shillings unaccounted for, in the column where she’d mistaken a seven for a one. At last, it all made sense – all the quarreling and worrying and strange tingling that resulted from his touch. This explained why he’d grown so inordinately protective of her, and why the sight of his blood on her fingertips had thrown her into absolute panic. Because he’d always wanted her this way. And deep down – so far deep down she hadn’t even been fully aware of it until this moment – she’d always desired him, too.

Dare is superbly talented at drawing vivid pictures with her writing, as shown in the excerpt above and throughout the book, such as the scene in the piano room (one I won't be forgetting anytime soon).  With a few well-chosen words, she places me into Lily's mind and heart - what she feels, I feel - but she saves her best work for Julian.  It's through his deep, heartfelt, sometimes incredibly poignant thoughts and actions that I fell in love with the man I had deemed least likely to win my heart.  That's not to say he isn't a bad boy.  He most definitely is and he certainly has some lessons to learn but, when the plumage is stripped away and the attitude checked at the door, if he can finally allow himself to trust Lily, trust her strength and their love for one another, enough to let her see the man he really is, then he'll become a man who is worthy of a great love...one that doesn't come easily or without cost but one that, once won, will last a lifetime.

While Julian and Lily's story is the primary focus of  Three Nights with a Scoundrel, there are important secondary stories that are resolved in the book.  We catch up with the couples from the previous two books (I loved the scenes with Spencer, Rhys and Julian and the evolving dynamic of the trio), learn the outcome of Claudia's "situation" (shameless begging for her to get a book of her own!) and finally learn who killed Leo and why...in a heartbreaking twist that I didn't see coming at all, written by Dare with an incredible depth of realism and compassion.

I highly recommend all three of the books in the Stud Club trilogy but it's Three Nights with a Scoundrel that stole my heart and I won't be one bit surprised if it steals yours too.

The Stud Club books, in order, are:  One Dance with a Duke, Twice Tempted by a Rogue and Three Nights with a Scoundrel.