Review -- A Kiss At Midnight 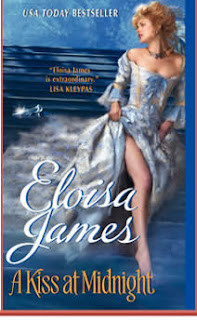 A handsome prince, a nasty stepmother, a fabulous and unique godmother, a one-of-a-kind slipper and a mistreated young lady longing for something better: all of the necessary elements for the classic Cinderella fairy tale. Eloisa James has taken the familiar Cinderella story and given it fresh new twist. Her readers will gobble it up like a decadent dessert. But it's even better because you get all of the satisfaction and none of the calories. *g*

Kate Daltry lives with her odious stepmother, Mariana and her frivolous, but not-at-all-evil stepsister, Victoria. She spends her days managing the estate, the tenants and most of the time, feeling like a servant instead of the daughter of the house. And quite frankly, it ticks her off! Nothing she says to Mariana about the running of the estate seems to sink in.


Talking to her stepmother, to Kate's mind, was like peeing in a coal-black outhouse. You had no idea what might come back up, but you knew you wouldn't like it.


Kate has been informed by Mariana that she must accompany Victoria's fiance, Algernon (Algie) Bennett, Lord Dimsdale, to visit his cousin, the prince. Victoria has been bitten on the lip by one of her little dogs, and Mariana doesn't want her to appear before royalty in her disfigured state. Kate thinks the whole scheme has disaster written all over it, but Mariana feels the resemblance between the two girls is close enough to fool people. Plus, it is imperative that Dimsdale's cousin, Prince Gabriel, give his official approval for the marriage of Victoria and Algie. So against her better judgment, Kate travels with Algie to Prince Gabriel's castle, "disguised" as Victoria, complete with wigs and her silly little pack of dogs.

Prince Gabriel Augustus-Frederick William von Aschenberg of Warl-Marburg-Baalsfeld is preparing for his betrothal ball and waiting for his intended, Princess Tatiana of Russia, and her entourage to arrive. Although he would rather be on an archaeological dig in Tunis, he must do his duty and marry the princess---he needs her fortune to support his castle, estates and family. Gabriel is not your typical Prince Charming, as Kate discovers when she first see him.


A man who had to be the prince was seated on a great chestnut steed, and for a moment she could see only his dark silhouette against the sun. She had the confused impression of his motion and power, easily controlled: an aggressive body, with big shoulders and muscled thighs.

She raised her hand to her eyes to shade the sun just as he leaped from his horse. Dark hair swirled around his shoulders as if he were one of the actors who came through the village to play King Richard or Macbeth.

Her eyes adjusted and she changed that idea. He was no Macbeth...more the king of the fairies, Oberon himself, eyes at a slight wicked tilt, with just a hint of the exotic.


Kate finds Gabriel incredibly rude and conceited, but in time her opinion of him changes. With each moment spent together, Kate and Gabriel's attraction leads them down a path that, however rocky it may be, is filled with passion, love and the hope that they just might live happily ever after.


He took the word from her lips. Their kiss was untamed as the garden they stood in. It was the kind of kiss that skirted the edge of propriety even though his hands stayed at her back, and hers around his neck.

It skirted propriety because they both knew the kiss was like making love, that there was an exchange, a possession and a submission, a giving and a taking, a forbidden intimacy.


Kate has fallen for her prince, and maybe with the help of her delightfully unconventional godmother, she may find her happily ever after. But no matter what happens she is strong and capable of standing on her own. Gabriel is the one who must prove himself and his willingness to sacrifice all for love.


He closed his eyes for a moment, and the color of his eyelashes was like the color of regret. With a kind of piercing sorrow, she knew that she would never forget this prince.


A Kiss At Midnight is a light, frothy, irresistible grown-up fairy tale. I spent many moments laughing out loud at Kate and Gabriel's antics and the charming, often quirky cast of secondary characters. This is most definitely going on my keeper shelf and has become my favorite Eloisa James novel. Treat yourself to a fairy tale that will keep you enchanted from "once upon a time" till "they lived happily ever after."