Review -- Passions of A Wicked Earl 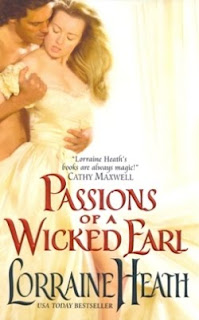 They are masters of seduction, London's greatest lovers. Living for pleasure, they will give their hearts to no one...until love takes them by surprise.

Reconciliation stories are among my favorite romance plot devices. There's anger, often betrayal, passion, and the promise of a happily-ever-after. It makes this romance lover's heart sigh with contentment. In the first book of her new series, Lorraine Heath has written a reconciliation story that will have readers crying, cursing, cheering, and sighing with delight.

Morgan Lyons, the eighth Earl of Westcliffe, was betrayed on his wedding night three years ago when he found his young bride in the arms of his younger brother, Stephen. Angry and hurt, Westcliffe banishes his wife to his country estate where he won't have to see her and be reminded of her betrayal. He then proceeds to savor every carnal pleasure available, trying to drive the image of his beautiful wife from his mind, even contemplating marrying his mistress.

Claire Lyons was a virginal seventeen-year-old bride who was terrified of the prospect of her wedding night with a man she barely knows. Seeking innocent comfort from her childhood friend---who is not as innocent as she---Claire is discovered with Stephen. No matter how she tries to explain to Westcliffe that things are not as they appear, he sends her to the country. But now she returns to London with a mission: her younger sister must have her season to find a husband. Claire not only needs Westcliffe's help, but she also needs to become his wife in more than name only. Now she's a woman with wants and needs, and she plans on seducing her husband and finally winning his love.


Taking another step, she staggered, grabbed the back of a chair. Westcliffe was immediately out from behind his desk, his arm about her steadying her. Releasing her hold on the chair, she wrapped her arm around his neck and lifted her gaze to his. "You own my heart," she whispered as tears welled. "I can't tell you the exact moment you took possession of it. I only know that I long to hear your laughter, that I constantly listen for the tread of your boots because even if you are not in the room with me, knowing you are near eases my loneliness.

"I am willing to withstand any public ridicule or scandal so that you might find happiness. If indeed you do love her and cannot love me---"

"Claire," he rasped, his large hand cradling the back of her head, holding her tightly. "How can I not love you?"

"You are all that is good and sweet and innocent," he continued. "To consider that you could truly love me---"

"Do not consider it, Westcliffe. Be certain of it."


Westcliffe is arrogant, unforgiving, and of course, sexy with a capital 'S'. But he wears his stern demeanor like a suit of armor to protect his feelings. He has never felt like he was good enough, worthy to be loved for himself. Claire is the perfect woman to show him just how wrong he is. In spite of his treatment of her, Claire is willing to open her heart to Westcliffe and capture his in return.

Passions of A Wicked Earl is a passionate, touching story that shows just how amazing the power of love truly is. This is a terrific start to what promises to be another phenomenal series from Ms. Heath. I cannot wait for book 2, Pleasures of A Notorious Gentleman (Stephen's story) which will be released November 30th.