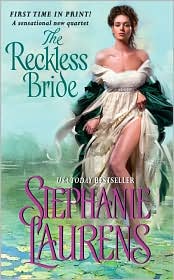 In India, five English soldiers are assigned the task of uncovering the identity of the Black Cobra, the cold-blooded leader of a murderous cult wreaking havoc throughout the country.  When the youngest of their group is murdered by the cult, the remaining four vow to make sure that the proof he uncovered, that the Black Cobra is a member of English nobility, makes it to England and brings the Black Cobra to justice.  They resign their commissions and leave by different routes, three carrying copies of the evidence and one carrying the original.  The three decoys, those carrying the copies, have all reached their destination.  Only Rafe Carstairs, and the original evidence, have not yet arrived.

Orphaned at the age of twelve, Loretta Michelmarsh has been raised by her straight-laced oldest brother and his wife.  Loretta learned quickly that adopting a prim and proper facade was the easiest way to be left to her own devices but now, at twenty-four, and having just rejected her eighth marriage proposal, Loretta's brother is forcing the issue.  Just in the nick of time, their great-aunt, Esme sweeps in and whisks Loretta away on a tour of European cities - a reunion tour of all the places Esme had visited with her late, diplomat husband - a convenient excuse to remove Loretta from her brother and sister-in-law's influence and turn her into a true Michelmarsh female:  one who doesn't exist on the sidelines but, instead, one who will grab life with gusto and open her heart to a passionate, life-long love.

Esme and Loretta are beginning their journey back to England when Esme is set upon by ruffians and rescued by Rafe and his companion, Hassan.  Esme, never one to miss an opportunity, recognizes Rafe as a fellow member of the ton and, since they have all booked passage on the same river boat, insists he and Hassan join her party as their bodyguards.  Seeing a chance to "hide in plain sight" from the Black Cobra operatives, Rafe accepts but quickly regrets that decision when he discovers Esme's beautiful, young grand-niece and the matchmaking glimmer in Esme's eyes.  Rafe and Loretta's attraction is immediate but both resist for their own reasons.  Rafe's complete attention must remain on his mission and Loretta, who has never felt these emotions before, doesn't know how to handle her feelings.  However, a long, leisurely river voyage and a meddling great-aunt wear down their resistance and they begin to gradually fall in love.  But, with the increased danger of Rafe's mission as they draw closer to England, the biggest challenge is not opening their hearts to the love growing within them but whether or not they'll live long enough to have the opportunity to do so.

I've really enjoyed this series and I wanted to love The Reckless Bride.  I liked it but it didn't blow me away as much as I wanted it to or as much as the first three books did.   I had anticipated the same fast pace, adventure and life-or-death action, especially as this is the final book in the series.  I did get that but, for the most part, only in the final 100 pages.  For the first 350 pages, the story flows at a very leisurely pace, much the same as the characters' slow sail down the Danube.  I appreciated the opportunity to get to know the characters and watch Rafe and Loretta's romance gradually bloom but towards the middle of the book it started to drag for me.  I wanted more action and intensity.  The final third of the book, however, more than met my expectations and had I been reviewing just that portion I likely would have given it five stars.  Here was the action and adventure I had been anticipating, that kept me glued to the pages and culminated in a jaw-dropping conclusion that I never saw coming.   While I would have liked more of that intensity throughout the entire book, I still enjoyed The Reckless Bride, and the entire Black Cobra series, and would recommend them to anyone who enjoys historical romance sprinkled with adventure, intrigue and simmering sensuality.