Fresh as a Daisy! 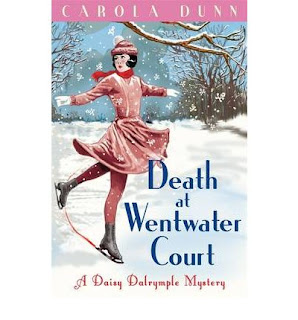 Hello, my name is Anna Campbell.

And I'm a Daisy Dalrymple addict.

Phew, glad to have got that off my chest!

I discovered these wonderful books through Facebook. How terrifically 21st century of me! If only I could work out how to send a text from my cell phone!

Carola Dunn posted a couple of really pretty photos of where she lives on the Pacific Coast in the U.S. So I went over to her page and saw she'd written a series of cozy mysteries set in her native England. It immediately became clear that Carola's mysteries had a large and enthusiastic following and that they sounded exactly my cup of tea. 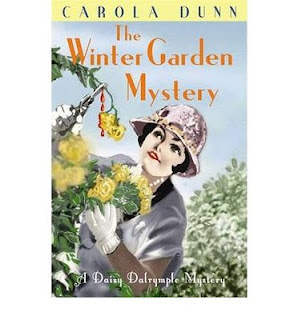 The Honorable Daisy Dalrymple is a viscount's daughter determined to support herself financially in 1920s England. So she finds work, much against her aristocratic mother's wishes, writing articles for magazines.

The first story, the enchanting DEATH AT WENTWATER COURT (odd to discribe a murder mystery as enchanting, I know!) covers Daisy's visit to a stately home that is the subject for one of her articles. It's the depths of winter (the house is soon snowed in) and when one of the guests is discovered dead on the skating pond, Daisy turns sleuth to reveal the murderer. So the scene is set for the classic English country home murder mystery, with all the suspects trapped in one spot and our intrepid major character determined to unmask the villain.

One of the fun things about the Daisy mysteries is that Carola Dunn is clearly a huge fan of the Golden Age of British detective fiction. There are so many sly nods to Agatha Christie and Dorothy L. Sayers and the other classic writers of the 1920s and 1930s.

While she's certainly no slouch, 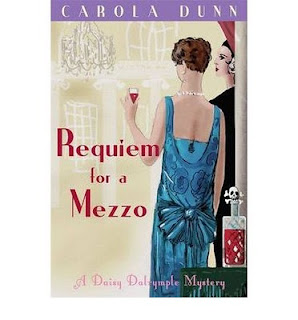 Daisy isn't a super-brain like Sherlock Holmes or Peter Wimsey. But she's unthreateningly pretty, outwardly guileless and she has an uncanny talent for making people confide in her. She's also intuitive and observant. So an ordinary girl in many ways, but one who has gifts that make her a great detective.

Just before snow closes the house off from the outside world, a couple of policemen from Scotland Yard arrive. Among them is dashing, clever, masterful Chief Inspector Alec Fletcher. Alec is an example of the 'new' man. He's been to university, but not Cambridge or Oxford, and he's middle class. Oh, and he's also all set to become the romantic hero of the series.

Alec is alternately annoyed and grateful for Daisy's interference. There's an immediate attraction between them although class differences create a barrier to their courtship. Carola Dunn does a wonderful job of outlining the sometimes uncomfortable relationships that resulted once the world changed after World War I and so many of the old certainties were swept away. One of the many pleasures of the books is that they convey this new world so beautifully even as they don't shy away from the overwhelming tragedy of the recent war. Daisy's brother and fiance were both killed in the trenches and her father died in the Spanish flu epidemic shortly afterwards so a cousin inherits the estate where she grew up. Daisy, brought up to a privileged life, is suddenly left to make her own way - and she does it with guts and grace so you like her even more. She really is such an appealing heroine! 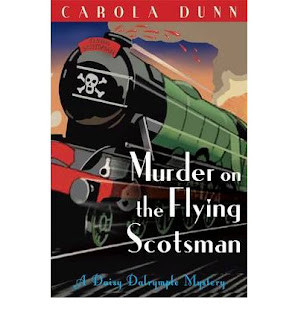 The setup for the second book in the series THE WINTERGARDEN MYSTERY is similar - Daisy is on assignment to write another article and Alec turns up to solve the crime and to become even more enamoured. In the third book, REQUIEM FOR A MEZZO, Alec and Daisy witness a murder at a concert at the Royal Albert Hall when he's finally asked her on a date. Alec's oft-repeated complaint that Daisy's always stumbling over dead bodies seems justified! The fourth in the series is one of my favourites. MURDER ON THE FLYING SCOTSMAN features a cast of wildly eccentric characters. It's a fun nod to books like MURDER ON THE ORIENT EXPRESS, except instead of Poirot with his moustache, we get sweet but perspicacious Daisy and her guileless blue eyes that always discern the baddie.

As you can probably gather, these are definitely on the lighthearted end of the murder mystery spectrum. There's never much gore or explicit violence and while there's suspense, it's not going to give you nightmares. What you get in these books is a really fun reading experience and a lovely, slowly developing romance. There's a sparkle and a verve that I find impossible to resist. A lot of that sparkle comes from the scrupulously observed 1920s atmosphere. The glamorous clothes, music, cocktails, cars and the quaint slang. Daisy is in a perfect position to show us society from the nobility through to Chelsea bohemia. Many of the characters Daisy encounters could step right out of a P.G. Wodehouse, what ho!

I've just read the ninth DD mystery, TO DAVY JONES BELOW. I'm waiting on tenterhooks for the tenth THE CASE OF THE MURDERED MUCKRAKER (how could you resist that title?) to arrive from the Book Depository. If you want to spend a topping couple of hours with a lovely heroine and her dashing beau, I'd strongly recommend picking up a Daisy Dalrymple mystery.

My verdict? Spiffing!
Posted by Anna Campbell at 12:02 AM