Guest Review - - What I Did for a Duke

What I Did for a Duke
By Julie Anne Long
Publisher: Avon
Release Date: February 22, 2011 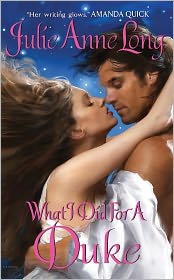 Julie Anne Long’s Pennyroyal Green series has become one of my favorite series. What I Did for a Duke is book 5 in this exceptional series and my favorite so far. I was hooked by the first chapter, a textbook perfect illustration of “inciting incident,” one that leaves the reader breathless with laughter and wonder at the author’s audacity. Ian Eversea, with typical Eversea recklessness, earns the enmity of Alexander Moncrieffe, Duke of Falconbridge, a man of power, wealth, and impressive intelligence, who decides that Ian’s punishment should be appropriate to his offense. Instead of killing Eversea, Moncrieffe plans to use Genevieve, Ian’s virtuous, scandal-free sister, as the instrument of revenge. But Genevieve is far more—more complicated, more interesting, more passionate--than the innocent that the duke expects, and he finds himself and his heart tangled in the trap of his own making.

Mere summary can only hint at the delights of this book. Foremost is the relationship between Genevieve and Moncrieffe as they delve beneath the superficial images of conventional maiden and dangerous rake. It is a relationship that surprises both of them with discoveries about one another and that pushes them to recognize unexplored parts of their very selves. With his scandalous reputation, his taste for the perfect revenge, and his willingness to do whatever is necessary for his beloved’s best interests, Moncrieffe reminded me of Georgette Heyer’s Justin Alistair, Duke of Avon. Long reveals far more of her hero than does Heyer, and Moncrieffe is humanized through the revelations in a way that Alistair is not; but the resemblance is there. Genevieve is quite simply one of my favorite heroines ever. She seems real to me. I understand her frustration concerning the image others hold of her, and if I had held any doubts that Moncrieffe was perfect for her, they vanished like the dew with his gift of flowers. I also loved that as different as Genevieve and Moncrieffe seem, they are alike in significant ways—not least in that their public personae are carefully controlled. We are told that Genevieve “always swiftly sieved her own thoughts through layers of care and propriety before they left her mouth. Her proverbial still waters ran very deep.” Of Moncrieffe, Long writes, “Rumor and reputation composed what was known about him now. It had made him outrageously wealthy and feared."

One of the deep joys of reading a JAL book for me is the language. Few writers have her gift of creating unexpected comparisons that add dimension to her characters. For example, here are some of Moncrieffe’s thoughts when he first begins to comprehend the many facets of Genevieve:

"He wasn’t precisely . . . nonplussed. Still, this particular vision of Genevieve Eversea required reconciling with the quiet girl in the morning dress, the moor pony with her determined gait. As though they were not quite the same thing, or were variations of the same thing, like verb tenses. He felt a bit like a boy who needed to erase his morning lessons and begin again."

With I Kissed an Earl, the fourth Pennyroyal Green book, Long increased the sensuality level of the story. What I Did for a Duke follows suit. But even though WIDFAD has some scorching love scenes, Long sacrifices none of the sexual tension that contributed to the success of earlier books. I’m happy to report that this is an author who understands the importance of kisses. Look at that gorgeous cover. This is one case where the cover fits the content. In one memorable passage, Moncrieffe tells Genevieve what a lover’s kiss should be:

"It should make you do battle for control of your senses and your will. It should make you want to do things you never dreamed you’d want to do, and in that moment all of those things will make perfect sense. And it should herald, or at least promise, the most intense physical pleasure you’ve ever known, regardless of whether that promise is ever, ever fulfilled. It should, in fact" . . . he paused for effect, “. . . haunt you for the rest of your life.”

Sigh! I do love a hero (and an author) who understands the power of words to seduce.

I could go on pointing out things that made me love this book and quoting passages that delight the reader in me even as they turn the writer in me green with envy. But my fingers would soon tire of typing, so I’ll just say that What I Did for a Duke is one of those this close to perfect books. I give it my highest recommendation. Now I’m going back to read it again.

Email ThisBlogThis!Share to TwitterShare to FacebookShare to Pinterest
Labels: 5 Star Review, Guest Review, Historical, Janga, Julie Anne Long, Reviews, What I Did For A Duke