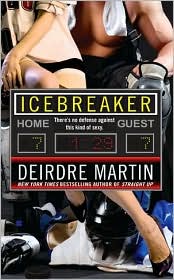 Anyone who knows me knows how much I love sports and sports-related romances so when I heard that Deirdre Martin had written another hockey romance I was all over it.  But even if you turn your nose up at sports, I hope that won't deter you from reading this wonderful contemporary romance which just happens to feature a "huge, unnervingly handsome, rugged, strapping" hockey-playing hero.

Stubborn, hard-headed and fiercely devoted to her career, Sinead O’Brien is one of most sought after lawyers in the city. She’s also one of the loneliest, though she won’t even admit it to herself much less to her loving, nosy Irish family. She’s still smarting from her failed marriage and not anxious to try again, especially at the expense of her career. Being the only female partner in the firm means having to work harder, longer and better than the male partners; leaving no room in her life for a relationship or the children for which she longs...or so she thinks.

Professional hockey player, Adam Perry has been brought to the New York Blades hockey team for one reason: to win the Stanley Cup (the championship trophy for those of you unfamiliar with the world of professional hockey). A man of few words, Adam prefers to do his talking on the ice. For years, the defenseman has been regarded as the hardest hitting player in the league but his reputation lands him in hot water when a player he hits (hard, but legally) is knocked out and a district attorney running for re-election decides to press charges. Adam’s dreams could be over if the hot shot attorney hired by the Blades can’t get the charges dropped.

I love the "opposites attract" trope and Icebreaker has it in spades.   Sinead is city through and through, a confident, highly skilled communicator who knows nothing about hockey, views it as a bit neanderthal, strongly suspects her new client is a few slices short of a full loaf and is very inconveniently attracted to him...even if he is a jerk.   Hailing from a small town in Canada, Adam isn't your typical professional athlete.  He doesn't like to party, doesn't like to talk, holds himself apart from teammates and friends because of experiences in his past and is more than a little worried that his uptight new lawyer is determined to uncover everything there is to know about him.  Oh, and he knows exactly what Sinead thinks of him but he's not about to correct her mistaken impression.  Needless to say, it's not love at first sight!  But, when they encounter each other at The Wild Hart, the bar owned by Sinead's parents and the unofficial hangout of the Blades, Adam begins to open up a bit and Sinead realizes that he's not the stereotypical "dumb jock" but, rather, a quiet man who doesn't like to talk about himself.  She, however, needs to learn as much about him as possible in order to defend him and the more she discovers, the more she likes what she learns. Slowly, as they begin to peel away the layers and get to know one another better, a romance develops which gradually deepens into a relationship with a possible future...if the obstacles facing them don't derail it first.

Icebreaker brings together characters from Martin's Wild Hart Saga and Blades series in a fast-moving, witty and heartwarming story.  If you're a fan of those series, you'll enjoy catching up with characters from previous books but, if you haven't read any of Martin's books yet, don't worry.  Icebreaker stands on its own just fine. Martin has populated the book with a terrific cast of supporting characters; especially Oliver, Sinead's best buddy and fellow lawyer and Anthony, Adam's friend and fellow Three Stooges lover who helps him tune in to the realities of Sinead's professional life with all the subtlety of a sledgehammer.   (Love the scenes between Anthony and Adam!)

Will Sinead succeed in getting the charges against Adam dropped?  Will the Blades win the Stanley Cup?  And, most importantly, can a city career woman and a small-town traditional man overcome the obstacles in their path to win their happy-ever-after? Pick up a copy of Deirdre Martin's Icebreaker to discover all the answers!