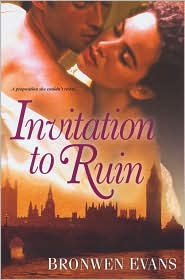 One Good Lady is About to Go Bad...
The only thing Miss Melissa Goodly has ever wanted out of a marriage is love. But any hope of that dissolves one wild night, when she loses herself in the arms of the most irresistible--and unobtainable--man in all of England. For when they are discovered in a position as compromising as it is pleasurable, she has no choice but to accept his proposal.
Avowed bachelor Anthony Craven, Earl of Wickham, never meant to seduce an innocent like Melissa. Yet now that the damage is done, it does seem like she'd make a very convenient wife. After all, she is so naive he won't have to worry about ever being tempted. Or so he thinks, until the vows are spoken and they are left alone-and his new bride reveals a streak just as brazen and unrestrained as his own...

Anthony Craven is known as The Lord of Wicked, a notorious rake whose main goal in life is pleasure. His newest goal is to make Lady Cassandra Sudbury his mistress, which is why he agreed to attend her ball. She has made it perfectly clear to Anthony that she would love to be his mistress, so he plans to come to her bedroom later that night to begin their relationship. Thanks to the scheming---well meaning, of course----of his twin brother Richard, Anthony finds himself in the bed of Miss Melissa Goodly, Cassandra's look-alike young cousin. When they are discovered, Anthony knows he must do the honorable thing and marry her, even though Melissa tells him it's not necessary. But even rakes have some honor.

Melissa Goodly fell for The Lord of Wicked the first time she saw him, and while she has many dreams of them together, she knows that he would never want to truly be with her. Never in her wildest fantasies did she expect to find Anthony Craven in her bed, making love to her, so she thought it was one of her dreams. But Melissa does not want a forced marriage, she longs for a love match, however that's not to be. Her brother, Christopher, is deeply in debt and has been searching for a wealthy suitor for her, so when he finds Melissa and Anthony together, his worrying is over. All Christopher cares about is himself, not Melissa's happiness. Melissa is determined to find a way to win Anthony's heart. He believes he is unlovable and incapable of loving another, due to the extreme cruelty of his father, a truly evil man. Anthony believes the same evil runs in his veins, so he has sworn never to father a child, letting his brother become his heir. Anthony finds it hard to resist Melissa, so she sets about seducing him, and teaching him to love.

Debut author Bronwen Evans has written a dark, sexy historical that touches on some difficult subjects like slavery and abuse. Anthony is my favorite kind of hero: dark, brooding and tortured, but with a heart of gold which beats for his heroine. Melissa is outspoken and independent, never giving up on Anthony. Fast paced, filled with an interesting cast of secondary characters, and sizzling with sensuality, Invitation to Ruin is sure to entertain historical romance fans.