Review -- A Light At Winter's End 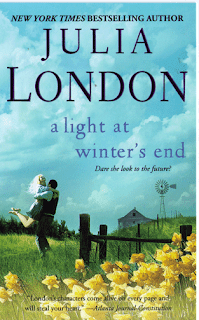 Holly Fisher has spent most of her life trying to measure up to her older sister Hannah. While Hannah made straight A's, Holly struggled in school due to her dyslexia. College was not her thing, so she never finished, but Hannah graduated with honors and went on to get a fantastic job, marry, and have a precious baby boy. Holly's passion has always been music, particularly songwriting, but in her mother's eyes that would never be a "real" job, not that working in a coffee shop makes the grade, either. Now her mother is dead after a long battle with cancer, and Holly is trying to repair her relationship with Hannah. But life throws Holly a major curve ball when Hannah shows up unexpectedly at her apartment and leaves her baby, Mason, with Holly. Shocked and confused, Holly has no choice but to put on her big girl panties and take control of the situation. She decides to go to the family homestead, that her mother willed to her, and figure out how to care for her nephew and what to do with the situation she now finds herself in. Little does she know that her handsome cowboy neighbor will be a bigger help to her than she can imagine.

Wyatt Clark has been hurt deeply by love so he lives alone on his ranch with just his dog for company. One day he sees smoke coming from the Fisher place, and when he goes to investigate he finds a flustered Holly who made a fire in the fireplace without opening the flue. Wyatt does the neighborly thing by helping Holly. He can see she's out of her element where the farmhouse and baby Mason are concerned. Wyatt has a baby daughter from his former marriage, so he's a veritable fount of child rearing information, which makes him even more attractive to Holly. It's not long before they are having play dates with the babies and growing closer, their own little family. Wyatt praises and encourages Holly with her songwriting and she in turn opens Wyatt's heart again to the possibility of love. Life is pretty close to perfect when Hannah shows up and wants her son back. Will Holly's and Wyatt's new found love continue to grow or will it crumble under the pressure of family drama?


And then, of course, there had been that kiss. That spectacular, unplanned-for, unanticipated, unlikely, out-of-the-blue kiss. That kiss was chocolate souffle, it was expensive champagne, it was a warm fire on a snowy winter day. Wyatt had seemed shocked by his own actions. He'd stared at her when he'd lifted his head, clearly stunned by what he'd done, and she'd felt him retreating, felt him pulling away, cobwebs and all, and she'd grabbed him back, had kissed him back. That kiss had been a gold strike, a summer thunderstorm, New Year's Eve fireworks. Spec. Tacular.


Julia London tackles painful issues like addiction, divorce and family drama in A Light At Winter's End. These characters traverse an emotion filled journey that takes them from despair and uncertainty to hope and love. Wyatt first made an appearance in Summer of Two Wishes, where he lost his new wife Macy to her first husband, Finn who was presumed dead while he was serving in the army in Afghanistan, but one day he came back home to Texas. It's not necessary to read this book first, but it does give a little more depth and understanding as to why Wyatt is so closed-off and stoic. What I love about Ms. London's contemporaries is that she writes about real people in heartbreaking situations and makes you feel every emotion right along with them. Their tears and their triumphs become yours, and you will be pulling for them all to find their happily ever after.

Borders
Posted by Gannon Carr at 12:04 AM