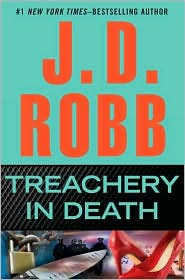 In the 32nd full length In Death novel, the focus is once again on crime, but this time the criminals are the cops. Eve Dallas' partner, Peabody, finds herself in the middle of a sticky and dangerous situation. After working out in one of the NYPSD's infrequently used gyms, Peabody has just finished showering when she hears two people enter the locker room, arguing. She realizes that she's listening to a pair of dirty cops, who are knee deep in corruption and murder. Lt. Renee Oberman and Detective William Garnet---aforementioned dirty cops---finally leave the locker room without discovering Peabody. Shaken, because she knows she would be dead if she'd been discovered and determined to see justice done, Peabody goes to Dallas's house to report everything she overheard. Eve informs Peabody that Renee Oberman is the daughter of retired Commander Marcus Oberman, aka Saint Oberman, a legend in the NYPSD. Now Peabody, Eve, and Roarke (Eve's husband) will work together to bring those corrupt cops down before they kill again.

Unlike most of the In Death books, the identity of the bad guy is known right up front, but it's the process of gathering solid evidence and bringing the villains to justice that takes center stage. Good guys vs. bad guys. For Eve, seeking justice for victims is what drives her. She takes the honor and privilege of being a cop seriously, and the idea that fellow cops have abused their authority to obtain money and ill gotten gains illegally and murder when it suits their purpose offends her to her very core. Even worse, is the fact that Renee Oberman was raised in a loving home, had a father who was respected and admired in the profession she chose to follow; all the the things that Eve never had. Yet, Oberman chooses to turn her back on all that, by coldly, calculatingly orchestrating every move of her operation, using her power and body, if necessary, to achieve her goals. But now she's made an enemy of the wrong person. Like Eve says, "the blue line breaks for wrong cops."

I have been reading this series since day one (1995), and sixteen years and more than thirty books later, I love it even more. The gritty, futuristic setting is endlessly fascinating, the character development is unparalleled, and the never ending suspense and action keep readers glued to the pages. Eve Dallas is one of my favorite fictional characters---tough, loyal and surprisingly vulnerable when it comes to those she loves. And of course, her husband Roarke is the ultimate man. Rich, gorgeous, brilliant, shrewd and desperately in love with his wife. *Sigh*

Each book in this series can stand alone, but reading them in order allows you to see the growth of the characters, both main and secondary. In fact, the incredible cast of secondary characters is yet another reason I'm crazy about this series. I was so happy to see Peabody take center stage in Treachery In Death and really come into her own. If you aren't already a fan of this series, I encourage you to start reading it ASAP. You won't regret it!


One lucky commenter will win a hardback copy of Treachery In Death.

Borders
Posted by Gannon Carr at 12:02 AM