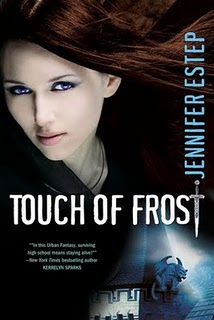 My name is Gwen Frost, and I go to Mythos Academy — a school of myths, magic and warrior whiz kids, where even the lowliest geek knows how to chop off somebody’s head with a sword and Logan Quinn, the hottest Spartan guy in school, also happens to be the deadliest.

But lately, things have been weird, even for Mythos. First, mean girl Jasmine Ashton was murdered in the Library of Antiquities. Then, someone stole the Bowl of Tears, a magical artifact that can be used to bring about the second Chaos War. You know, death, destruction and lots of other bad, bad things. Freaky stuff like this goes on all the time at Mythos, but I’m determined to find out who killed Jasmine and why – especially since I should have been the one who died …

Jennifer Estep writes my favorite urban fantasy series--Elemental Assassin--featuring kick-ass heroine Gin Blanco. The first four books have kept me riveted and I know the next will be no exception. Now Ms. Estep is delving into the YA scene with her new Mythos Academy series. While I don't always read YA, I have found that there are some great books to be enjoyed even if you're not part of the teen scene, and Touch of Frost is one.

Gwen Frost is sent to Mythos Academy soon after the death of her mother. She feels completely out of place among the other students. They are all descendants of great warriors: Valkyries, Spartans, Amazons and the like. To them, Gwen is just the "Gypsy girl"---definitely not like them. Gwen does have the gift of psychometry---when she touches an object she can see/feel the object's history. Most of the time, it's harmless; finding someone's lost cell phone, etc. But other times, she sees painful and disturbing scenes that are hard to forget. Being the outsider at school goes from bad to worse when Gwen discovers one of her fellow students---Jasmine Ashton, mean girl and Valkyrie---murdered in the Library of Antiquities. Not only that, but the Bowl of Tears---an ancient artifact that is being sought by an evil faction to start the second Chaos War. Now Gwen finds herself in deep....and the next one targeted for death.

Touch of Frost takes the angst of high school life and blends it with the supernatural---think Percy Jackson. You thought the ups and downs of your teen years were bad; Gwen Frost has all that drama times one hundred. But she's a spunky young woman who won't give up. Plus, she has a bit of a crush on Logan Quinn, the rough, tough and very sexy Spartan. Ah, those teenage hormones. I read this book pretty quickly and would have given it an even higher rating, except for the fact that there were some repetitive phrases that were a little annoying at times. Besides that, Touch of Frost was a fun read. While it is classified as a young adult book, I wouldn't recommend it for younger teens due to the language and sexual content. But if you or any older teen you know enjoy a little magic, this book's for you. The next book in the series, Kiss of Frost, will be released November 29th.