Review -- Wicked in Your Arms 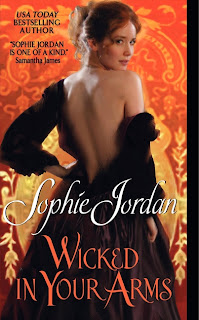 After spending the last ten years leading an army against radicals determined to overthrow the royal house of Maldania, Prince Sevastian Maksimi returns home to face his grandfather, the king. Sev was never supposed to become the prince and future king, but the loss of his father and brother sealed his fate. Now he must do his duty by coming to London to find a wealthy heiress to wed in order to secure the Maksimi line and help the royal family and their country financially recover from war. He seeks help from his cousin, Malcolm, in order to find the perfect bride. He requires someone refined and elegant. Someone with an impeccable lineage. Someone other than Grier Hadley. She may have a fat dowry, but her illegitimacy makes her an unacceptable choice.

As the bastard daughter to the king of London’s underworld, Grier is used to the scorn she receives from most people. She doesn’t like it, but is accustomed to it. And she is smart enough to recognize that the only reason she is invited to social gatherings is because her father has money...and lots of it. Her father seeks an exalted status and the only way to get that is to marry off his daughters to men of rank. Grier craves security and respectability and knows she must marry a proper gentleman to get it, but wants a man who appreciates her and not her money. From her hiding place behind a potted plant at a ball, she overhears a haughty gentleman talking to another about the ignoble roots and undesirability of Miss Grier Hadley. That did it! Grier has had enough and promptly spills her cup of lemon water on the arrogant oaf’s head.

Sevastian is stunned and surprised by Grier’s actions. After all, he’s a prince! Who would dare do such a thing to a prince?!

He scratched his jaw. “No one has ever poured a drink upon me.”

“You mean after ten years of war you’ve never suffered a drink in the face?”

“That was war, Malcolm. I suffered bayonets, cannons, and bullets. Dodging lemon water was not part of the routine.”

When Sevastian and Grier are both invited to the same house party and get to know one another, their opinions of the other begin to change. Grier learns that Sevastian’s life will never be his own—his country comes first along with so many responsibilities. And she appreciates his devotion and loyalty. Sev discovers that being born on the wrong side of the blanket doesn’t make that person immoral. Grier is honest and forthright and comfortable in her own skin. Something he feels when he’s with her.

There was something about her—a fire, a passion he had not seen since the war. She was no simpering, naïve, spoiled miss. She possessed an air, a certain knowledge of life and, perhaps most astounding of all, she wasn’t jaded for it.

Despite growing close, they both know that Sev can’t marry Grier. His grandfather would never accept her and her background. Sev is torn between duty and his heart’s desire. The question is, which will he choose?

Books featuring royal characters as the hero and/or heroine aren’t my favorite type, but I loved Wicked in Your Arms! I like that Ms. Jordan didn’t overemphasize the royalty aspect. Yes, Grier isn’t “good enough” for Sev, but he could just have easily been a duke, a marquess, or an earl. His reasons for not entertaining the idea of marrying Grier are sound and believable. And yet, despite his reasons and his initial conceit, he’s an incredibly likable hero. Grier is down-to-earth and sensible and even after overhearing Sev say those unkind things about her before they officially meet, she doesn’t act ridiculous. She handles the situation with a cool head. She also gives as good as she gets when they verbally spar (which I love!). Passion and deep emotion flare between these two people who totally deserve their HEA. I can’t wait for the next book in this series (hopefully it’ll be Grier’s sister Cleo’s story) and heartily recommend this book!