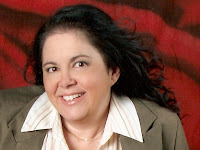 Today, it is our pleasure to welcome Mia Marlowe to The Romance Dish. Before becoming a historical romance author, Mia Marlowe shared her love of fictional characters through her performances as an opera singer, sharing the stage with many performers, including Placido Domingo. Mia's novella, A Knack for Trouble, can be found in the just released anthology IMPROPER GENTLEMAN. Please give a warm welcome to Mia Marlowe as she talks to us about ...

We've all heard that clothes make the man. Turns out, they made the woman too. In the fashion conscious late Regency period, the cut of a woman's gown could spell the difference between being acclaimed "an Original" or relegated to the ranks of the wallflowers. My novella in IMPROPER GENTLEMEN (available now from Kensington) is set mostly in 1830--the heart of the Romantic era. This little slice of history is jammed between the popular Regency period and the reign of Queen Victoria. Like the world around them, the fashions of the time are in a state of transition. 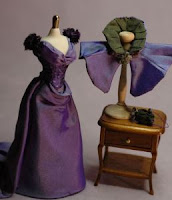 One of the first things I like to do when I start on a new story is fill my character's closets. I think this lovely plum gown and capelet works well for my heroine Rosalinde's evening wear. (For an excerpt from a time when she's wearing it, visit MiaMarlowe.com!)

As you can see, waistlines were back in fashion--no more girlish empire styles. A woman's figure was on display, which meant a return of the corset, a whalebone reinforced body shaper. Young ladies from 17 to 21 aspired to a waist size that matched their age. The corset was worn over a chemise (a slip like garment) with no bloomers, knickers or undies of any sort. Later, slit crotch drawers would be added and still later in the Victorian era, an all-in-one would replace the chemise and drawers. 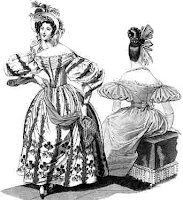 The skirts were wider than during the Regency, but hadn't reached the ridiculous circumference of the Victorians yet. There was no need for a wire crinoline. A few petticoats would give the fullness needed. The bottoms of the skirts were often embellished with flounces and excessive laces.

Necklines were cut off the shoulder in order to make the shoulders appear wider and the waistlines correspondingly narrower. The gigot, or leg-of-mutton sleeves were very popular.

Shoes of the period were flat and plain, rather like ballet slippers. The most popular hairstyle featured a neat center part with curls around the sides of the face.

Fashion often demonstrates how women are viewed. After the relative freedom of the Regency, society began to put more strictures on women's behavior. Fashion began shaping their figures with a vengeance. Later in the Victorian period, sleeves were cut to restrict arm movement and for a brief time, undergarments limited women to a six inch gait. It demonstrated female frailty and dependence on the men in their lives. In the Romantic period, we hadn't gotten to those extremes yet, but a woman's level of freedom was definitely changing. For the worse.

I use my heroine's wardrobe to show how she feels about herself, her world and her place in it. What do you think? Do the fashions in a story matter to you? 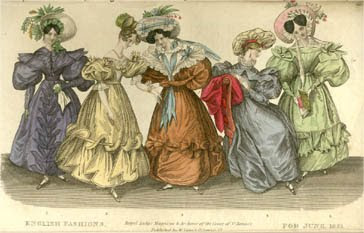 Leave a comment or questions for Mia to be entered in a random drawing for DISTRACTING THE DUCHESS, one of her backlist titles!

For more about Mia and her upcoming books, visit MiaMarlowe.com. While you're there, be sure to enter her contest and visit her very active blog. Mia loves to connect with readers, so you can also find her on Facebook and Twitter!
Claim your copy of Improper Gentlemen today!