As I mentioned Wednesday, the Literacy Signing at this year's RWA National Conference was a total crush, similar to what I imagine a Regency Ball must have been.  But, like those Regency crushes, everybody at this event had a fabulous time!  Here are a few of the friendly faces from this year's signing. 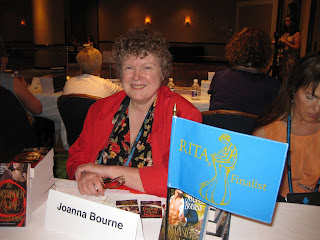 Rita finalist, Joanna Bourne.  Her next book, The Black Hawk, the long-awaited story of Adrian Hawkhurst will be released November 1st.  Those of us who read this series are counting the days! 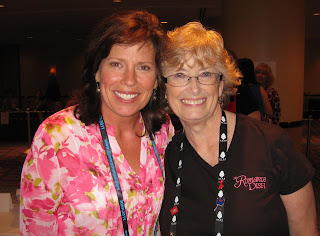 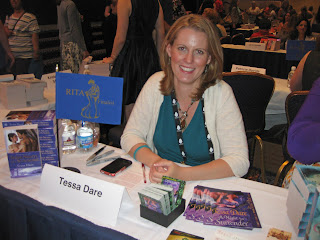 Rita finalist Tessa Dare. This was Tessa's second consecutive Rita final.  Fans of this terrific historical author will be happy to know that her next book, A Night to Surrender, the first in her new Spindle Cove series will be released August 30th. I finished an ARC of the book on the plane to NYC and fell in love once again with Tessa's characters and exquisite storytelling. 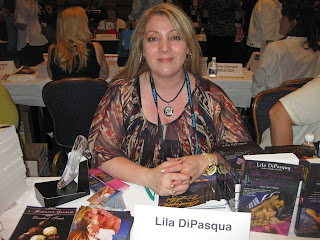 Lila DiPasqua's next book, A Midnight Dance, comes out August 2nd!  A Dish favorite, Lila is not only a lovely person but a wonderful writer as well! 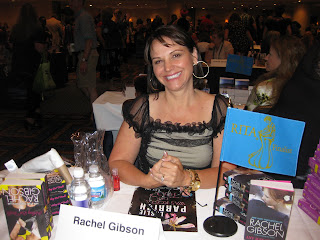 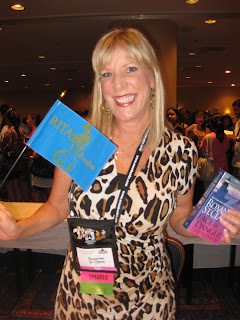 Roxanne St. Claire was a Rita finalist for the the first book in her Guardian Angelinos trilogy, Edge of Sight.  I highly recommend this series! 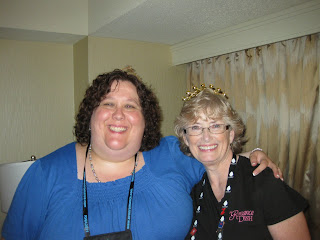 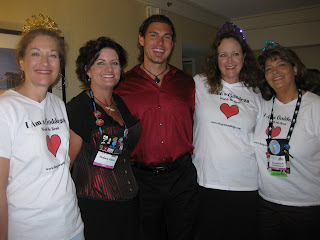 Y'all probably know by now that I adore the Romance Bandits. They're a group of talented writers who are sweet, funny and know how to have a good time! I had great fun hanging out with many of them at this year's conference, including breakfast with Joan Kayse and Suzanne Ferrell and lunch with Christina Brooke. 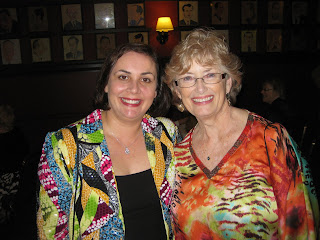 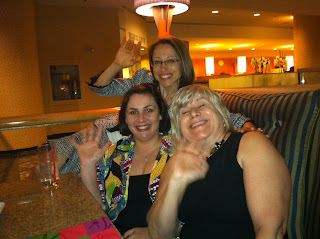 Some of you may remember that Gannon, Buffie, Andrea and I reviewed for Romance Novel TV before starting our own blog. RNTV was run by the dynamic twin team of Marisa O'Neill and Maria O'Neill Lokken. I hadn't seen Marisa in person in four years and had never had the pleasure of meeting Maria in person so I was over the moon with delight to get together with them last Wednesday. I toted them to Robyn Carr's reader party with me Wednesday afternoon (Maria is a devoted fan after being introduced to Robyn's books by moi) and then joined them at the Berkley cocktail party Wednesday night. Robyn is one class act who never fails to show her appreciation for her readers.  We were treated to delicious food, wonderful gifts and a chance to chat with her and her author friends...like the incredible Susan Elizabeth Phillips! 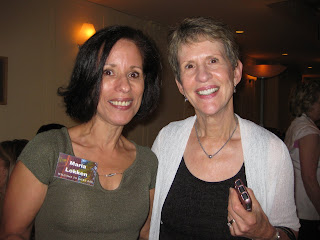 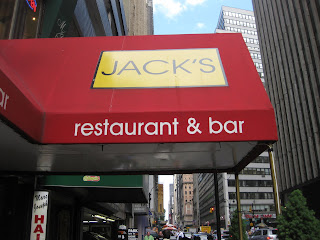 Those of you who read Robyn Carr's Virgin River series will appreciate the venue for this year's party:  Jack's Restaurant and Bar!

The Berkley party was held at the legendary Sardi's restaurant, a place where celebrities have gathered for years. Their walls are covered with framed caricatures of famous people who have dined at the restaurant. It was fascinating to check them out. Many well-known romance people were present at this party and I savored cozy chats with the likes of Joanna Bourne, Jo Beverley, Jodi Thomas, Christina Dodd, Anne Gracie, Lisa Kleypas, Nalini Singh and many more. Pretty cool, eh? Berkley also feted us with a dazzling array of appetizers which included delicious (huge) shrimps.  Did I mention that I adore shrimp? 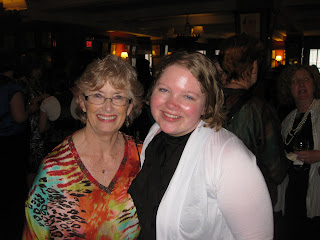 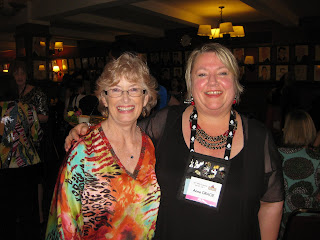 PJ with one of her favoritite Aussies, Anne Gracie!

After stopping to chat with Manda Collins (whose debut historical will be out in early 2012) and Santa O'Byrne, who were eating on the deck at Junior's, Christina Brooke and I ventured up to the Atrium Bar where we found Susan Sey, Inara Scott, Donna MacMeans, Kate Carlisle and others who were wandering in looking fabulous after attending their respective publisher parties.   We partied for a while then I headed back to my room around midnight to recharge those bunny batteries for Thursday.

Most of you know fsbuchler, a regular visitor here at the Romance Dish.  Flora (as she's known in real life) and her husband were in NYC on vacation last week and treated me to breakfast Thursday morning.  What a lovely visit we had!  Flora is a fascinating woman and her husband, George is an absolute sweetheart.  I had such a good time chatting with them.  I couldn't stay too long though as I had a full schedule Thursday so I was happy to learn that Flora would be attending the Avon Readers Tea that afternoon, giving us more time to visit before going our separate ways.


﻿
Thursday was the beginning of the publisher signings - smaller author booksignings open only to registered conference attendees where the books are provided by publishers and free.  Though smaller in size, these signings were no less crowded than the big literacy signing on Tuesday night.  I like the publisher signings.  People start lining up about 45 minutes before they open the doors so it's a good place to meet people - like Debbie Hancock from Kentucky.  We had a lovely chat while waiting in line.  It's also a good place to catch up with fellow busy bloggers like Faye McMichael from Fresh Fiction.  Faye and I kept crossing paths throughout the entire conference.  Once you get into the signing room, the atmosphere is relaxed and opportunities to chat with authors plentiful...especially towards the end when the crowds clear a bit.  Of course, you don't want to wait until the end to start the circuit of the author tables or all the books will be gone!  My advice:  get books first - chat later. 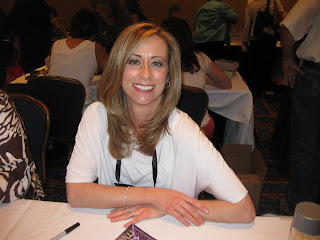 One of our favorite contemporary authors, Julie James!


Thursday is also the day of the awards luncheon, where the winners of service awards, Bookseller of the Year and Librarian of the Year are recognized.  Among those seated at my table for this luncheon were Tiffany Clare, Maggie Robinson, Vanessa Kelley and her husband, Randy.  It was so exciting to see Wendy Crutcher a/k/a SuperWendy receive the award for RWA Librarian of the Year.  Her speech was as entertaining as she always is online and I was surprised to discover she had grown up less than 40 miles from me.  Small world!  It was Sherrilyn Kenyon though who held the entire room spellbound with her moving, inspirational speech.  Here again is the link if you'd care to read the transcript of her speech.  Fair warning.  Have tissues ready!

After lunch, I met Jacquie D'Alessandro in the Atrium Bar for some one-on-one chat time.  I first met Jacquie at the literacy signing in Atlanta in 2006 and was instantly captivated by her effusive personality and zest for life.  Honestly, you just can't be around her and not smile! 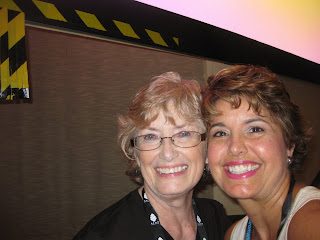 
After my visit with Jacquie, I was off to more publisher signings then on to the Avon Reader's Tea.  Avon gathered a panel of historical authors (Katharine Ashe, Miranda Neville, Maya Rodale, Stephanie Laurens, Gaelen Foley and Sarah MacLean) for a romance chat that streamed live over the internet.  (Click here to watch a video of the event.) 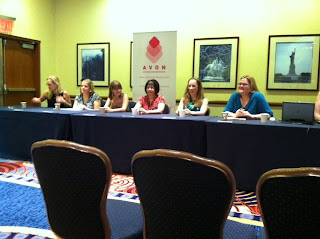 While those of us in the audience sipped drinks and snacked on delicious treats, the authors talked about heroes, heroines, favorite authors and answered questions both from the audience present and those tuning in online.  Thanks to Avon for a lovely time!

Thursday night was my only free night of the week and I was looking forward to retreating to my room for a bit of recharging.  But, that was before I hooked up with Nicki Salcedo and fellow GRW (Georgia Romance Writers) friends who were on their way to dinner at the famed Carnegie Deli.

I joined them for the evening and I'm so glad I did!  Carnegie Deli was an experience I wouldn't have wanted to miss.  We had the best waiter (David) who made the experience all the more enjoyable. 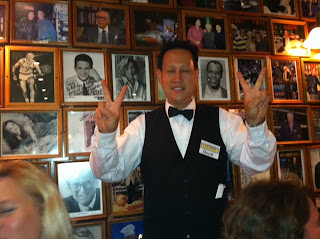 Nicki and I split a "Woody Allen", a sandwich of pastrami and corned beef on rye that was enormous!  We both stuffed ourselves and still had enough left over to make two big sandwiches.  Seriously! 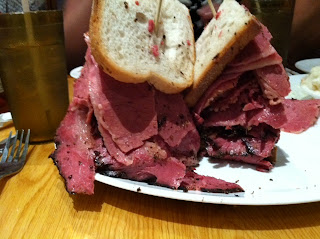 Of course, even though we were stuffed we couldn't leave without a bite of their famed cheesecake.  We ordered one slice of regular cheesecake with strawberries and one slice of chocolate cheesecake which was more than enough for the six of us to share. Carnegie Deli is just a few blocks from Central Park so after dinner we walked to the park to do some exploring.  Of course, dog person that I am, I made the acquaintance of an adorable Lab puppy out for a walk with his mistress.  He was just too cute!

After returning to the hotel, a few of us went up to The View, a revolving restaurant on the 48th floor of the hotel.  Strangely enough, standing at the windows of the restaurant didn't bother me at all but the trip up (and down) just about did me in.  I'm not all that crazy about heights.  The drinks at The View were huge but delicious and the view was phenomenal.

When I finally gathered the courage to go back down in the elevator, I once again found myself at the Atrium Bar, this time for an informal party to celebrate the accomplishments of Leigh LaValle and Courtney Milan.  Leigh sold her first book and Courtney hit both the USA Today and NY Times Bestseller lists with her self-published novella, Unlocked.  I'm so thrilled for both of them!

I returned to my room wondering where the week had gone.  Conference is like that.  You arrive on the first day with four jam-packed days in front of you and - BAM - before you know it, the last day is just around the corner.  I stayed up way too late chatting with my roommates but that's one of the best parts of the conference too. Sleep is for when you get home. ;-)

Next up...the final day of the conference capped off with the glamorous Golden Heart and Rita ceremonies.  Come back Sunday for the final chapter of my RWA experience!

Avon assembled a terrific panel of authors for their Readers Tea.  If you could choose six authors (dead or alive) to join you for tea, who would you select and why?

One random commenter from today's blog will win a prize package of goodies from my conference stash!