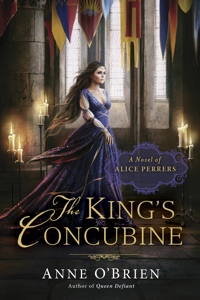 Little is known of the historical Alice Perrers other than that she became a lady-in-waiting to Queen Philippa of Hainault in 1364 and later mistress of the Queen’s husband, Edward III, who was so besotted with Alice that he gave her land and jewels, including some belonging to his late queen.

Benedictine monk and chronicler Thomas Walsingham described her as “a shameless, impudent harlot” who, despite her lack of beauty, with the aid of “blind Fortune” and her seductive voice rose to heights inappropriate to one of her “low birth.” Historians agree that the misogynistic Walsingham’s account is likely biased, but Perrers, whose ambition and political scheming may have served as a pattern for other royal mistresses, is generally portrayed as scheming and acquisitive. At the very least, Perrers used her native abilities shrewdly to overcome the restrictions imposed by birth and gender and became a powerful figure in 14th-century England. Anne O’Brien takes the limited facts of Perrers’ life and creates a largely sympathetic portrait of a woman who rose from poverty and powerlessness to a position of wealth and influence, only to have everything she had worked for threatened by her enemies.

Beginning with Alice as a child of unknown origins growing up among the nuns of Barking Abbey and continuing through her unconsummated marriage at fifteen to the much older Janyn Perrers, a moneylender, and her return to the convent after her husband dies during an outbreak of the plague, O’Brien presents Alice as physically unattractive but gifted with intelligence, persistence, and a willingness to seize her opportunities. When Queen Philippa visits the convent, Alice captures her attention, and later the Queen sends for Alice and makes her one of her ladies-in-waiting, a <i>domicella</i>, a lady attendant upon the queen but not of high birth. With the Queen’s protection, the young Alice becomes a pet of the other ladies-in-waiting. That changes quickly when Alice takes on a role in the King’s life.

Although the marriage of Philippa and Edward was arranged, it became a love match, and O’Brien shows the devotion of the pair who have been married for thirty years by the time Alice enters the court. The Queen suffers from dropsy (edema) and a shoulder injury and is in constant pain. When sexual congress becomes too painful for her to endure, she plans for Alice to become the mistress of her still virile husband, preferring low-born, loyal Alice in that position to the humiliation she would experience if Edward took a high-born mistress.

Although the Queen continues to champion domicella and her relationship with the king grows beyond mere physical intimacy, Alice becomes a scandalous figure, loathed by the court as the betrayer of a beloved queen. Aware that a time will come when she is no longer under the King’s protection, Alice uses all her resources to insure her own security and the well-being of her children. But her enemies are many and powerful after Edward’s death, and loss of property, exile, and the threat of death will trouble Alice until she finds another champion and husband in Sir William Windsor.

Stories that give voice to the women silenced by history are my favorite kind of historical fiction. I was particularly interested in Alice Perrers since she was likely a patron of Chaucer. Some have speculated that the two were lovers. I’d love to read a novel about that relationship, but O’Brien rightly focuses on the relationships that defined Alice Perrers. This is no sanitized version. O’Brien’s Alice is a woman of large ambition who does not hesitate to use all that she has to see that she is never again the deprived, defenseless creature she once was. But readers see and sympathize with the child whose barren life fostered ambitions most would have deemed foolish. This Alice is a complex creature, loyal to the Queen who saved her and to the King who loved her. She protects Edward’s image even as age destroys the man whose splendor once seemed godlike to her. She is sometimes wracked with guilt and doubt. One particularly poignant moment occurs after Windsor proposes marriage and Alice tells him she cannot leave the aging king:

It should have been a comfort to have two men who believed that I had even an inch of a better nature, but it was not. When the whole world railed against me, sometimes it was difficult not to believe the defamation. Perhaps I did not deserve happiness. Not when the length and breadth of my sins were tallied up.

Some of the best scene are the war of words that takes place between Alice and Isabella, daughter of Philippa and Edward, and between Alice and Joan of Kent, who became the daughter-in-law of the royal couple. It is Joan, truly a royal bitch, who gives young Alice the advice that guides her throughout her life: “It is important for a woman to have the duplicity to make good use of whatever gifts she might have, however valueless they might seem.”

The King’s Concubine is a fascinating tale of a fascinating period in English history. I recommend it for fans of historical fiction, particularly those who enjoy the novels of Elizabeth Chadwick, Philippa Gregory, and Susan Holloway Scott. O’Brien has promised a book on John of Gaunt and Katherine Swynford next. I’m looking forward to that one.