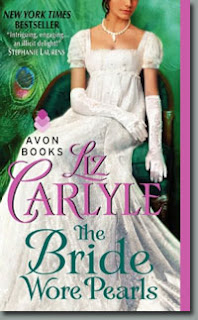 Lady Anisha Stafford, the widow of a British army officer, leaves her life in India, at the urging of her older brother (Adrian Forsythe, Lord Ruthveyn, hero of One Touch of Scandal), to see that her two young sons are brought up understanding the English culture that is their heritage from their father. She also hopes England and the influence of his older brother will be beneficial for her younger brother, Lucan, the child of her father’s second marriage, a spoiled charmer with no sense of responsibility. The offspring of a marriage between a Scottish lord and an Indian mystic, Anisha finds it difficult to adjust to life in England where she is always self-consciously aware of the mixed blood that makes her a misfit in both cultures. The few friends she makes are part of Ruthveyn’s circle in the St. James Society.

Rance Welham, Earl of Lazonby, is attracted to Anisha from their first meeting when he meets her ship as she arrives in England, but his dark history ensures that he restrict his attentions to a light flirtation and friendship. These limits become even more imperative when Ruthveyn and his bride leave London and Lazonby is charged by his friend with the care of Anisha and her sons.  Lazonby knows that the last thing Anisha needs is an association with him, a man infamous for his licentiousness and suspected of murder, to weaken her already tenuous claim on acceptance by the ton. She is also a distraction he can ill afford since he is obsessed with untangling his past.

Lazonby’s darkness is not merely a convenient pose. Sentenced twice to die by hanging, he escaped with his life only because of his connections to the mysterious St. James Society. Although innocent of the charges, he knows that his behavior in trying to escape his mystical gift placed him in the circumstances that led to his trials. He blames himself for his mother’s suicide and his father’s premature death, and he is determined to clear his name and his family’s reputation. In the meantime, he resorts to the alcoholic haze of absinthe to escape the memories that plague him. He thinks he has solved the problem of his feelings for Anisha by pairing her with Geoff, Lord Bessett, but when Bessett returns from his assignment having fallen in love with Anais de Rohan (The Bride Wore Scarlet), Lazonby is both relieved and troubled because Anisha is proving irresistible.

In the third book in her Fraternitas Aureae Crucis (Brotherhood of the Golden Cross) series, Carlyle gives her readers another look at the mysterious brotherhood with their equally mysterious gifts. As in the earlier books, the primary characters are complex and flawed. Lazonby’s disastrous choices were fueled by his determination to deny that he had inherited his mother’s gift. His denial led to decadence, danger, and near death. It has brought him to the present moment in his life where he is imprisoned by his hatred and need for revenge and unable to build a meaningful life, regardless of the temptation. He is still reluctant to admit that he is, as his friend Sutherland insists “more than a Guardian”; he is the possessor of the gift albeit in a form different from his mother or his friends.

Did he have it?
He had something. Though he possessed nothing in the way of prescience, he could read some people, some of the time. A rare few spewed emotion like blood from a gaping wound. Others merely seeped or gave up nothing at all.
As a young man, he’d believed that everyone knew this. But they did not. And this difference had made him a damned fine card player—the finest, perhaps, that the hells of London had ever seen. And he was an even better soldier, especially in close combat.


It is only when he comes to understand who he is that Lazonby can accept that he and Anisha are meant to be, that he can be the man she and her sons need.

Identity is also a key theme in the characterization of Anisha. Carlyle uses clothing and jewelry to keep readers aware of Anisha’s mixed blood and the ways it shapes her sense of hybridity as well as the obstacle it presents to her ever being fully accepted into English society. Even her personal wealth and her brother’s title are not enough to overcome the stigma completely.  That Anisha herself sees her clothes and jewels as metaphors for her identity makes the images more powerful. Just before the ship docks in England, she removes her nose ring, an act that is both deliberate and symbolic.

She had learned long ago that removing her phul would not remove the Rajputra in her, nor did she wish too.
But she did wish, for the boys ‘sake, to fit in. And she wished, honestly, to ease her own transition into this frigid, water-bound empire. Yet at the same time, Anisha had grown a little weary over the years of having one foot planted here and another there; caught forever in that shifting dance between who she was and who someone else thought she ought to be.


Later, Anisha pairs Indian dress with an English shawl for daily wear, and she wears a sari like a Scottish sash with a ball gown. She may struggle with how to meld the two cultures that identify her, but she accepts the two parts of her being. And the struggle makes her strong. She refuses to be controlled by Ruthveyn’s protectiveness or manipulated by Lucan’s selfishness, and she defies Lazonby when he tries to shut her out and keep her safe and passive.

“I’m not some prize pig at the village fair. You cannot win my desire or deserve it. It either is, or it isn’t. And you must allow me my right to choose which things I do and don’t worry about.”


As much as I appreciate the complexity of Carlyle’s characters, the skill with which she creates sexual tension between Anisha and Lazonby makes this book a standout for me. From the moment they meet, Lazonby and Anisha are physically aware of one another, and every contact heightens that awareness. The building intensity serves to make the love scenes practically singe the pages. Beyond the sizzle, there is also a gradually increasing intimacy between the two, an intimacy that includes sex but is more than two bodies joined in sexual intercourse. These two know each other. They are friends before they are lovers, and the friendship continues to be a vital part of their relationship.

The Bride Wore Pearls is not a perfect book. The suspense element lacks the power of the romance, and repeated references to what seems to be homoeroticism—but isn’t--serve no purpose that I could see. But these are minor irritants when measured against a romance between two characters who both fascinate and appeal and a deftly drawn Victorian world that includes connections in which a faithful Carlyle reader will delight. If you like your romances with sizzle and substance, I recommend The Bride Wore Pearls. Readers who have not read the first two books in the series may miss some nuances, but Anisha and Lazonby’s story can be read as a standalone. I hope Carlyle is not finished with these characters. I want to know if Lucan grows up to be as interesting as his brother and sister.