Guest Review - - A Not So Respectable Gentleman?

A Not So Respectable Gentleman?
By Diane Gaston
Publisher: Harlequin
Release Date: July 24, 2012 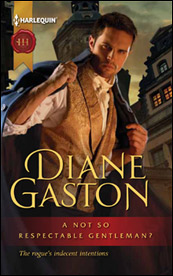 One careless moment saw Leo Fitzmanning’s stables and the beginnings of his stud farm go up in flames, but his home, Welbourne Manor, was untouched by the fire, and his dream of building a life there with Mariel Coverdale survives. He approaches her father to ask for his blessings on the match with high hopes. But her father informs the young suitor that Leo’s scandalous family and illegitimate birth are handicaps that not even being a duke’s son can overcome. Coverdale insists that his daughter deserves a better life than the one Leo can offer her and that, in fact, she has found someone better and is betrothed to him. With a broken heart and wounded pride, Leo leaves England.

Two years later he returns—experienced, mature, independent, and with no desire to win societal acceptance. He has made his fortune doing things his family would be horrified to know, and he refuses to conform to their idea of what his life should be, no matter how loving their intentions. By chance, he learns that Mariel is betrothed, not to the upright young man Leo though she had married already, but to a sleazy, sadistic baron who finds his pleasure in abusing women. Leo feels that he must warn Mariel against the man, but when she insists she is helpless to escape the betrothal, he determines to save her.

Mariel never knew why Leo betrayed her. He disappeared from her life, and for two years she has had no word from him. Although the information that Leo gives her about the man her father is insisting she marry is shocking, Mariel is already uncomfortable with the idea of marrying Lord Kellford. But she feels a responsibility to her younger sisters, and her father insists they will be ruined unless Mariel and her fortune become Kellford’s. She doesn’t see a way to avoid the marriage, and she’s also determined not to trust Leo again.

Once Leo and Mariel are honest with one another, they discover how they have been manipulated by her father. But Mariel still holds Leo guilty for having so little faith in her, and she is reluctant to accept his help. Eventually, they work together to stop Mariel’s marriage, but their chances of success seem slim. In order to save Mariel, Leo must learn that there is no shame in accepting help from those who love you. It is with the help of all his brothers that he is finally able to achieve his goal.

A Not So Respectable Gentleman? is a spinoff from The Diamonds of Welbourne Manor (2009), an anthology about the Fitzmanning Miscellany, the progeny-- hers, his, and theirs (the latter illegitimate)—of the Duke and Duchess of Manning who left their respective spouses to live together for years before the duke’s first duchess died and left them free to wed. Gaston, Deb Marlowe, and Amanda McCabe wrote the closely interwoven stories in the anthology. Leo is the oldest of the Fitzmannings and the youngest of four sons in the complicated family. His youth and his history make his actions and attitudes credible. I found him an interesting, appealing hero with enough flaws to keep him human. I found Mariel less interesting because she is a less developed character. She does try to defy her father, and she has legitimate concerns about her younger sisters who have yet to make their debuts into society. But scandal for them and her father’s arrest or even hanging seem preferable to the life she knows awaits her as Kellford’s wife.  I confess that I’m not a fan of the self-sacrificing heroine.

But there is much to like in this book. The secondary romance between Mariel’s maid and Leo’s associate adds interest and dimension to the story. And I was delighted that all of Leo’s siblings made appearances. The denouement with Leo seeking his brothers’ help was my favorite part. I found the family dynamics more interesting than the romance.

Diane Gaston is a gifted writer and a good storyteller, and A Not So Respectable Gentleman? is an interesting addition to the stories of the Fitzmanning Miscellany. I recommend it to those who read and enjoyed the anthology. They will know Leo’s history and understand his pride and his reluctance to be dependent on his brothers, none of whom shared the stigma of Leo’s illegitimacy.  A reader coming to this story without having read the earlier work may find the relationships confusing.

~Janga
http://justjanga.blogspot.com
Posted by pjpuppymom at 7:17 AM