Review - - When Love Comes My Way 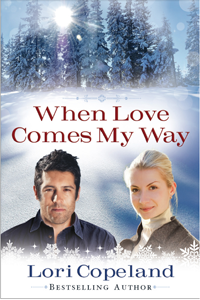 Timber heiress Tess Wakefield may have called the logging camps of Michigan's Upper Peninsula home when she was a young child but she is now a city girl, firmly entrenched in Philadelphia society.  When her grandfather dies and leaves the timber business to her, Tess briefly considers keeping it but her fiancé (who has been her guardian since she was eleven and upon whom she has relied for financial advice for most of her life) recommends selling.  The timber business, according to reports, is in decline and Tess can use the money to fund her dream of opening a string of hat shops.  She makes arrangements to sell to a rival company and, in an uncharacteristic burst of independence, travels alone by train to Michigan to sign the papers that will seal the deal.

Jake "Big Say" Lannigan loves the timber business and can't imagine doing anything else.  As foreman of Wakefield Timber, he enjoyed a close relationship with the owner, a man who shared Jake's love of the ruggedly beautiful forests of Michigan's UP and supported his dream of restoring the land with a tree planting program.  Unfortunately, Rutherford Wakefield died before they could put the re-planting program into effect and now Jake's faced with Wakefield's spoiled granddaughter who is on her way to Michigan and set upon selling the entire business to the most ruthless man in the area.  Jobs will be lost and forests will be devastated if he can't convince Tess Wakefield to change her mind before it's too late.

On the last leg of her trip, Tess boards a wagon along with Fedelia Yardley and two loggers.  Miss Yardley, a woman close to Tess in age, is on her way to the Wakefield camp to be the new school teacher and is expected.  Tess is not.  When an accident tosses the wagon into icy, rushing waters, Tess is the only one of the two women who survives but when she awakens with amnesia, everyone believes her to be Miss Yardley.  Everyone, that is, except Jake.  As he spends time with "Fedelia," Jake begins to notice things about her that lead him to believe she might be the woman with whom he's been corresponding since her grandfather's death.

When we find out her true identity, let her be Fedelia Yardley.
Jake could deal with falling in love with a stranger, but not Wakefield's granddaughter.  And yet, in his heart, he knew who she was.

He has a choice:  tell her what he thinks or use the long winter ahead to show her why Wakefield Timber is special, give her the opportunity to get to know the people she employs and win her over to his side in his quest to restore the forests they clear cut for future generations.   But when push comes to shove, will he be able to go against his conscience?  And when desire turns to love, will he keep his silence or listen to his heart and risk losing all by telling Tess what he believes to be the truth?

I enjoyed this book so much!  First, it's set in my home state of Michigan and Copeland does an excellent job of capturing the beauty, danger and history of the unique Upper Peninsula and the people who call it home.  Her descriptions are so vivid that I quickly lost myself in them; remembering the bone-chilling cold of the harsh winters, easily imagining the spartan conditions of the logging camps, feeling the heart-wrenching fear when someone is injured in a logging accident, smelling the freshness of the pine forests and hearing the joyful laughter and voices raised in song as friends race across snow-covered, moonlit fields in horse-drawn sleighs.  But, as much as I enjoyed the backdrop of this book, it's the characters that bring it to life.  Tess and Jake are at the center; two good but stubborn people who butt heads at every turn, set off enough sparks to start a forest fire and couldn't be more perfect for one another.  The banter between them is a delight!  Surrounding them is a memorable cast of secondary characters who all add flavor, humor and added depths to the story in their own ways.  Especially noteworthy are André, a gentle French giant who is Jake's right hand man, Echo, a downtrodden young woman trapped in an emotionally abusive marriage and Tess's fiancé Talbot Wellington-Kent, a good man who truly does want what's best for Tess.

This is an inspirational romance so it's on the mild (not spicy) side but still packs plenty of sexual tension.

Her hands gently cupped his face.  "If you're trying to scare me, you might as well stop.  It's time you knew the real Jake Lannigan, and that man finds me attractive."
"You don't know me or what I'm capable of doing."
"I know you well enough to see a good man, one who would not take advantage of a lady who merely asks for a - mmph."
Her words were stopped when his mouth met hers.
She closed her eyes and gave herself freely to his kiss, wrapping her arms around his neck as his arms came around her to hold her close.  She felt a new awareness he brought alive in her.  She would gladly spend her life with him, mending his clothes, cooking his meals, soothing his hurts, bearing his children, and loving him fiercely until one or the other of them drew a last breath.

The book also is not preachy.  Rather, the faith of the characters in the story is a seamless part of their being as shown in this quote as Tess prepares for bed after an enjoyable day getting to know the people of the logging camp.

Sundays in a logging camp would be her favorite day.
Late that night, as she snuggled down between extra clean sheets, she tried to clear her mind.  She plopped her pillow over her face to drown out the noise in the next room, but tonight the men's snores weren't so bothersome.  She knew the snorers a bit more personally now, and somehow that made the strange noises easier to tolerate.  Thank you, God, for the new friends I've made today.
For some crazy reason, she wished Jake Lannigan had been one of them.

This is my first Lori Copeland book but it won't be my last. A beautifully written love story filled with humor, emotion and memorable characters, When Love Comes My Way is a book I highly recommend.

Do you read inspirational romance?  Have you read any of Lori Copeland's books?  Any inspirational books or authors you would recommend?  I'm giving away the review copy I received of When Love Comes My Way to one randomly chosen person leaving a comment on today's review.
Posted by pjpuppymom at 11:57 AM