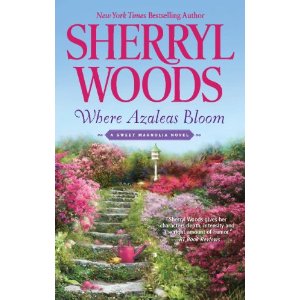 Lynn Morrow and her husband Ed are still fighting over custody and support issues, but she has accepted that her marriage is over. What she can’t accept is that he is late with mortgage payments and support checks, and even with her part-time job at Raylene Rollins’s boutique, by the end of the month, she’s struggling to feed her two children. Fourteen-year-old Lexie is growing up too fast and worrying about grown-up problems, and ten-year-old Jeremy doesn’t understand why his favorite after-school snacks are no longer available.

Contractor Mitch Franklin has known Lynn since they were kids. He even had an unrequited crush on her in middle school, but she had eyes for no one but Ed Morrow even then. Mitch is a widower with two college-age sons, and while loved his wife Amy deeply and knows that in a sense he always will, he also realizes that he is ready to move on with his life.

Mitch is building a new family room onto the house of Raylene and Carter Rollins (Honeysuckle Summer), and Lynn and her children live next door to the Rollins family.  Raylene and Carter consider Mitch family and often include him in their dinner plans, and since Raylene suspects Lynn is having financial problems, she invites her and the kids for dinner as frequently as she can without wounding Lynn’s pride. Thus, Lynn and Mitch are thrown into one another’s company.  An observant guy, he soon realizes that Lynn is struggling. He offers his friendship, and when he discovers Lynn needs a second job, he hires her as part-time bookkeeper for his company, a job she can do from home and still be around for Lexie and Jeremy.

It doesn’t take long for Mitch to discover that he wants more than friendship from Lynn. She takes some convincing because she is wary of giving her heart again, but Mitch, who looks great in a pair of jeans and makes her feel cherished and respected, is hard to resist. But just as it looks as if the two have found their way to happiness, complications ensue in the form of an ex-husband, sons who aren’t happy at the idea of their dead mom being replaced, and the kind of gossip at which small towns excel.

Where Azaleas Bloom is the tenth book in Sherryl Woods’s Sweet Magnolias series. The series has suffered from some unevenness, but this one is a heart-warming, believable second chance at love story. In a society where most women experience a 45-73 percent decrease in the quality of life after divorce, Lynn’s economic woes ring true, as does her anger at her estranged husband’s irresponsibility towards his children and her guilt, however unreasonable, over a failed marriage.

Her determination to protect her children from the things that worry her and to affirm that their father loves them regardless of his actions also seems authentic. Even Lynn’s pride and reluctance to let friends know about her problems are understandable.

It’s easy to fall in love with Mitch. He’s a good guy, compassionate and patient with a keen sense of honor and an instinctive understanding of kids. Of course, it doesn’t hurt that he’s good-looking and a tender, skilled lover. The fact that he was engaged in a happy, faithful marriage for twenty-two years makes his desire to fall in love again and share his life logical. I also found his adult sons’ reactions to their father’s romance realistic.

I suspected the ending of Ed’s story well before it was revealed, although not from the beginning of Lynn’s story. Having lived through a similar experience with a close friend, I had no problem believing this subplot, but I would like to have seen more evidence that he realized the effect of his actions on his children.

As with all the Sweet Magnolia books, friendship is a strong thread in WAB. Lynn is not a Sweet Magnolia, but the women support her and draw her into their circle. The friendship theme encompasses Mitch’s relationship with Raylene and Carter, Lexie’s besties relationship with Carter’s sister Mandy, and even Lynn and Mitch’s friendship that turns to love. Fans of the series will enjoy seeing more of Raylene and Carter and, in smaller roles, other Magnolias and spouses.  Some may even remember Mitch as the contractor who built The Corner Spa in the first Sweet Magnolia book, Stealing Home.

Sweet Magnolias fans won’t want to miss this one. For readers who lost interest with the second generation stories, this one and Chasing Fireflies, Book 9, are both well worth a return to the series, And for those who have never read Sherryl Woods, if you like romance heavily flavored with sweetness and small-town relationships, I think you’ll enjoy this visit to Serenity, South Carolina, and you don’t have to have read the other books to enjoy this one.