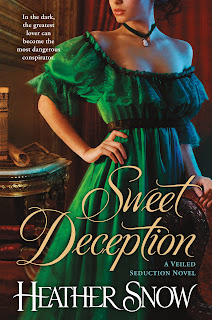 After discovering a devastating betrayal that turned his life upside down, Lord Derick Aveline left his family home, swearing never to return, but King and Country have brought him back for one last mission before he gives up the spy game and starts a new life in America. Playing the part of a pampered society fop, he plans to use his childhood connection with Miss Emma Wallingford to gain the trust of the locals in his quest to uncover the identity of a traitor who has been selling secrets to the French.  He doesn't expect to walk into his home and discover Emma ordering his staff and most of the town folk about like an experienced field marshal.  And, he somehow forgot to take into account the fact that Emma would have grown up in the years he's been gone.  The girl next door has evolved into a lovely woman with a brilliant mind, an insatiable curiosity and a few secrets of her own.

Emma Wallingford has been enamored with Derick Aveline since she was a young girl but she is none too pleased to have him back in Derbyshire.  A brilliant mathematician and criminologist, Emma has secretly been the acting magistrate - a position she loves and for which she is eminently qualified - since her older brother's debilitating stroke.  If Derick discovers it is Emma and not her brother who is responsible for investigating a string of murders, everything she has worked hard to achieve could be lost.  But when a maid from Derick's castle is found murdered and Derick insists on inserting himself into the investigation of her death, Emma begins to see glimpses of the Derick she knew and loved as a young girl.  And as they grow closer, Emma stands to lose more than her job if Derick discovers her deception.  Her heart is at serious risk of being lost to a man who has no intention of staying in England.

Heather Snow's debut book, Sweet Enemy was one of my top books of the first half of 2012 and I liked Sweet Deception even better.  Snow's heroines are intelligent, independent and ahead of their time.  With Emma, she brings us a brilliant mathematician and statistician with a logical, literal outlook on life, the adorable habit of mangling metaphors and someone who should be kept far, far away from the kitchen.
Every time Emma got a metaphor wrong, she endeared herself to Derick - and me - more, such as in the following scene where she informs Derick that she knows he's not really who he's pretending to be.

"I'm certain you've worked very hard at affecting the perfect degree of pomposity."
Well, yes, he had actually.  But he didn't appreciate her pointing it out.  Or noticing that it was an affectation, for that matter.
"However, if you were the skirt-chasing ne'er--do-well you want me to believe you are, you wouldn't be here," she said.  "You would care naught for finding Molly's killer or for" - she averted her gaze - "watching over me, as you say."  Her eyes returned to him and she pointed a delicate finger directly at him, "You'd still be traipsing around the Continent sowing your wild seeds."
Something between a choke and a cough closed his throat.  Derick huffed twice to clear it.  "That's oats, Emma," he murmured.  "Wild oats."

Derick has played so many roles during his years as a spy that he's lost track of who he really is.  That, and an unwelcome truth about his parents, have him ready to run as far away from England as he can.   Snow skillfully and gradually, peels back the layers of the man through his growing relationship with Emma but it will take a near tragedy to finally open his eyes to what has become most important in his life.

An intriguing mystery, a heartwarming romance, a touch of humor and a hero and heroine who are meant to be together all wrapped up in a fast-paced, well-written story make Sweet Deception a book you won't want to miss.