Guest Review - - Chance of a Lifetime

Chance of a Lifetime 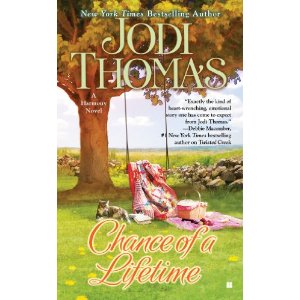 Jodi Thomas takes readers back to Harmony, Texas, for a fifth installment in this small-town series filled with quirky characters who show that there’s always something extraordinary about the lives of ordinary people. In Chance of a Lifetime, the focus is on three of these characters: Emily Tomlinson, the town librarian, whose painful secret has leached the color and dimension from her life; Rick Matheson, a lawyer whose empty office seems like his biggest problem until someone starts trying to kill him; and Beau Yates, a young country singer-songwriter with bad memories and big dreams.

Tannon Parker was Emily Tomlinson’s best friend throughout their childhood, the kind of friend who never let her down until one day he wasn’t there when teenage Emily most needed someone. Their friendship never recovered, and for years they have been little more than passing acquaintances. But when Tannon needs a favor from Emily, life gives them the chance for the wounds of the past to heal and a renewed friendship to grow that will give them a future richer and brighter than their youthful dreams.

Emily is an only child whose parents are dead, but Rick Matheson, a member of one of Harmony’s original families, has the opposite problem. The town is filled with Mathesons and their connections, all of whom are determined to protect Rick when it becomes clear that he has an enemy who wants to rid Harmony of the lawyer permanently. Enter Trace Adams, a motorcycle-riding U. S. Marshall on leave who possesses the skills and training to protect Rick from his assailant and the appeal and passion to jeopardize his heart in the process. Trace is a loner not looking for permanent ties, but Rick believes in the future they can build together enough to take a chance on rejection.

Beau Yates’s fundamentalist preacher father cut loose the son he’s convinced is headed for hell, but the growing popularity of Beau’s music in Harmony and beyond and moonlight rides with a mystery girl are giving Beau a taste of heaven—his idea of it at least. Life in small-town Texas may be a long way from the Nashville stardom Beau dreams of, but it nurtures him and gives him rich material for his songs. Meanwhile, Beau’s belief that his chance will come is growing stronger.

Harmony has become one of my favorite fictional places, and I look forward to each new book in the series. Thomas deftly weaves together the stories of new characters and characters readers have met in earlier books. She also includes enough bits about lead characters from earlier books to assure readers that their favorites are flourishing but not enough to distract from the new focal characters. If parts of the plot in this one seem to defy the logic of small-town life, the characters are such a delight that it’s easy to suspend disbelief and just enjoy another visit to Harmony. I finished Chance of a Lifetime satisfied that Emily and Tannon are all set to live happily ever after, hopeful of seeing Rick and Trace move toward a more definite HEA in future books, eager to see Beau’s dream continue to develop, and persuaded that the next book in the series will leave me as primed for more Harmony stories as this one and its predecessors did.