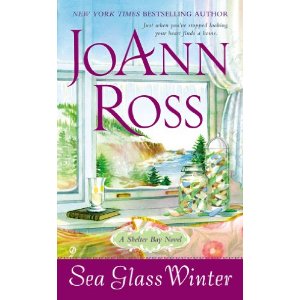 Shelter Bay’s newest residents are jewelry designer/glass artist Clair Templeton and her fifteen-year-old son, Matthew.  The two have had a rough year. Clair, still a teenager herself when Matt was born, has always been a single mother, and the death of her mother, who had been her support system through all the years, has left a hole in her heart. Matt too has had a rough time with the loss of the second most important person in his world. When his grades slipped and more serious trouble threatened to mushroom, Clair started looking for a place with a slower pace and fewer temptations than Los Angeles to see Matt through his last three years of high school. Shelter Bay, a place she’s always found restful on visits there, is her choice for their new home.

Matt doesn’t share his mother’s enthusiasm. The top freshman basketball player in California, the previous season, he sees his dreams of an athletic scholarship and NBA stardom vanishing if he’s stuck in Podunk USA playing for a team that hasn’t had a winning season in a a dozen years. He takes an even dimmer view when it turns out that his new coach is more interested in building a team and developing character in his players than he is in winning and inflating the egos of stars.

Dillon Slater’s career as an explosive ordnance disposal specialist blew up less than thirty days before he was scheduled to leave Afghanistan. His new job acquired through Troops to Teachers, a program that places former military personnel in rural classrooms and other places where they meet a special need, was waiting for him. Texas-born Dillon is assigned to the high school in Shelter Bay, Oregon, where for at least three years he’s going to be teaching physical science and physics and coaching basketball. He immediately feels at home in Shelter Bay and has already made some good friends, but he has concerns about the Booster Club members who have big expectations of the 6 foot, 3 inch kid who’s transferring from California.

A winning season may not be Dillon’s primary objective for his team, but he has a definite interest in winning the attention of Clair Templeton. A connection sparked between them on their first meeting, but Clair, who has a history with men who leave, is determined to focus on her son and her art, in that order. She’s not interested in complications, and Dillon Slater is one temperature-raising complication. But even a woman as determined as Clair finds resistance increasingly difficult when her new match-making friends keep throwing them together; Matt, who’s soon convinced Dillon is the best coach ever, decides he’s just the man his mom needs; and her own heart tells her Dillon is unlike any other man she’s ever known.

I cheered when JoAnn Ross returned to writing small-town romances, the kind she was writing long before the current trend, and I’m loving the Shelter Bay series. Sea Glass Winter is the fifth Shelter Bay book, following The Homecoming, One Summer, On Lavender Lane, and Moonshell Beach. Clair and Dillon, like the protagonists of the earlier novels, are interesting, likeable characters who have overcome difficulties, found what they are meant to do with their lives, and are committed to living those lives with passion and integrity. I especially appreciated the look Ross gives readers at Clair’s development as an artist and at Dillon’s teaching practices as well as his coaching.

Ross also does a superb job of creating the teenage Matt who is an important part of this story. She captures the confusion, the moodiness, and the contradictory blend of adolescent self-absorption and familial love that characterize this basically good kid. She also manages to bring us up to date on the lives of characters from the other books in an organic manner that never distracts from Clair and Dillon’s story. Friendships are formed, pets are adopted, babies are born, and marriage is proposed as Ross weaves bits of the lives of Kara and Sax, Charity and Gabriel, Maddy and Lucas, Mary and J. T., and Phoebe and Ethan into the central story.

Sea Glass Winter can be read as a standalone, although I expect most readers will be so hooked by the secondary characters that they’ll want to read the rest of the series. I recommend them all, and I already have Castaway Cove, scheduled for release on July 2, 2013, on my new must-read calendar.