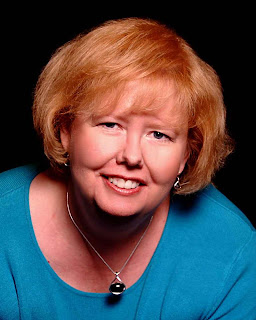 I am so excited to welcome Joan Kayse today.  Many of you know Joan as one of the famous (infamous?) Romance Bandits - and we know her as one of the nicest people around - but today we're welcoming her as a newly published debut author!  That's right.  We finally have the opportunity to read about those Roman heroes!  When Joan isn't busy creating sexy heroes, she's busy as an orthopaedic nurse.  Find out more about her at her website and connect with her at Facebook and the  Romance Bandits blog.

Please join me in giving Joan a very warm welcome!

Heartfelt thanks to PJ and Andrea for having me today.

wasn’t built in a day.

That, my friends has been my motto since the day I decided to get serious about all these stories flying around in my head. I’ve even considered having it tattooed somewhere on, er…my person.

My name is Joan and I write Roman historicals.

Kind of sounds like a 12 step program, doesn’t it? Well, it felt like it in 2001 when I began to explore the alternately astounding, energizing, frustrating, beat your head against the wall, raise your fist with fervor world of romance writing. That was the year I attended my first RWA conference in . It was there that I met my first challenge in writing a non-Regency, non-Scottish historical. “I write Roman historicals” I stuttered, still not quite used to actually SAYING I was a writer. Oh, the looks of pity, the soothing “Oh, sweetie…really. Look at the market” responses. Would have withered some. Me? Just made me all the more determined to do just that.

Understand I was a baby writer then, having only been focusing on publication for a little over a year, after my mother passed away and I hit that “evaluate your life” phase of grieving. After all, she bestowed on me my creative mind and passion for the things I love. I grew up reading and loving romance, especially historical romance. Why not write one?

While I adore all types of history, in all of its infamous, magnificent, decadent glory is my favorite period of all. I have no logical explanation for it. I mean the closest I got to studying it was taking two years of high school Latin. Substituting Latin words in the refrain of “Willie Go Round in Circles” was about all I took away from that. Oh, and a major crush on Mr. Powell the teacher J

But I KNEW from the first day I sat down to flesh out THE PATRICIAN  that I would be telling three heroes’ stories and they really, only could take place in Rome. Take a little bit of alpha, a touch of wounded (or in Bran’s case…a of wounded) and a smidgen of an all consuming Empire that threatens their very existence. Throw in vibrant heroines that meet them toe to toe and voila….a series was born.

My fellow Banditas over at The have created an elite contingent of gladiators. Demetrius, Lucien and Marcus are great guys (and mix a mean margarita) but there were more than gladiators and tribunes living and loving in 52 CE. Meet the first of my hot, Roman heroes:

Jared of Alexandria shuns both his Roman and Hebrew blood, a curse that’s kept him on the fringes of society, to become a powerful and successful merchant prince. When his trading empire is threatened by an unknown enemy who not only wants to see him ruined but dead as well, he uses every means to put an end to it. He turns to a beautiful barbarian seer, a slave with hair the color of firelight and eyes that shine like emeralds only to be betrayed into a fate worse than death—slavery.

But Jared’s not the only one who’s been dealt a blow by the Fates:

Bryna of Eire lives each day burdened by the yoke of Rome and her own guilt for leading her beloved brother and clansmen into Rome’s clutches. She curses the gift of sight which her master exploits, keeping her under lock and key, telling fortunes and fattening his purse. When an opportunity to be freed of her confinement comes, Bryna takes it, though her instincts warn that lying to the sensual, golden-eyed man that plagues her visions risks her very soul.

.Conflict much? And it starts from the very beginning. Here’s an excerpt from THE PATRICIAN:

Bryna’s head shot straight up with the creaking of the door. Her eyes burned from the sun streaming into the gloom of her cell. Against the blinding light, she could see only the silhouette of a very tall man. She forced herself not to rub her arms and betray the anxiety skimming along every inch of her body.
The man stepped inside. Coeus started to follow, but was stopped by a muscular arm stretched across the entry.
“I have paid my coin,” the man said. The rich timbre of his voice seemed familiar. “I would speak with the seer alone.”
Coeus’ face turned several shades of red before tilting his head in acquiesces. “As you wish, master.” He backed out but not before shooting Bryna a hard look of warning. The door slammed closed.
Accustomed to the dismal light, Bryna’s eyes adjusted quickly. The man stood with his back to the door, legs braced, his face draped in shadows. The long sleeves of his robe fell toward his elbows when he crossed his arms over the broad chest of a warrior. A furring of black hair jutted out from beneath the neckline of the tunic, eliciting a coil of warmth deep in her belly. She pulled her gaze away, trailed down his narrow waist and froze at the knife fastened to his belt.
The light of a thousand stars flashed in her mind and she was running along a dark path, her hand grasping that of a small child. Distorted sounds echoed around her, weeping, screaming followed by a weight of grief so heavy her vision-self fell to her knees. Blinking through smoke at the grove of tall palm trees, she looked down, bile rising in her throat. The sightless eyes of the beaten, bloodied woman stared at her and a wave of guilt ripped through her gut.
Bryna gripped the edge of her seat as she settled back to the present, still feeling waves of energy pulsing from him, unsettling impressions of anger and vengeance and resolve. Beneath the maelstrom she glimpsed gentler traits, but those were quickly swept away, unable to stand up to the stronger emotions. She bit her lip at the familiar power that flowed from him. It bombarded her from every direction, overwhelming her senses with one certainty—he was dangerous.
And she was going to lie to him.

The Roman world is filled with more than gladiators and centurions. It’s filled with people like Jared and Bryna, fighting an Empire and a society that would deny them that which they seek most. Love.

What interests you most about Ancient Rome?  Are you stubborn like me?  Have you ever been told "you can't?"
Posted by pjpuppymom at 12:00 AM