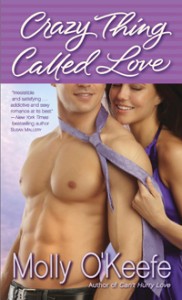 Maddy Baumgarten and Billy Wilkins grew up together. They lived in the same neighborhood, they attended the same schools, they were high school sweethearts. At eighteen and twenty, crazy in love, they got married. Two years later, in a storm of anger, hurt, fear, and regret, their marriage crashed. For fourteen years, they have moved in different worlds.

During these years Maddy completed a journalism degree and earned a position as host of a morning television show. She buried Maddy Baumgarten and Maddy Wilkins in the past that she does her best to erase from memory. The present belongs to Madelyn Cornish, a thin and elegant Dallas celebrity, who has ambitions for a network TV job. Billy, who was just beginning to build a reputation in the NHL when Maddy divorced him, has been in the Stanley Cup playoffs seven times and has become a celebrated hockey star. Fame and fortune have not eased the rage that is his constant companion, one that has led him into one fight too many. A changing game with growing concern about concussed players, a new team where he feels light years older than the rookies, and a gentleman coach who wants Billy to be a leader rather than a brawler have made the career that defines Billy Wilkins less certain than he believed.

Something shifted in Billy three months ago when he saw Maddy at the opening night party for the Crooked Creek Spa (Can’t Hurry Love). He dares to believe he sees something of his Maddy in the polished beauty he watches on the TV screen, but when Maddy refuses to take his calls, he’s at the point of giving up. Then, his agent calls with an offer for Billy to be the subject of a multi-part makeover on a morning show. Billy is in the process of telling his agent what the show can do with its offer when he learns that the show is Dallas AM, hosted by Madelyn Cornish, and he agrees to what he feels sure will be humiliation because it will allow him to see Maddy again.

Madelyn is terrified of resurrecting the past. She uses all her power to prevent Billy’s appearance, but she loses the battle. Billy’s presence proves just as devastating as she feared. Her efforts to maintain her distance prove futile as first her body and soon her heart prove as susceptible to Billy as ever. But when their past resurfaces in unexpected ways, even love may not be enough to persuade Maddy to risk the illusion of safety her new identity has given her.

Molly O'Keefe does it again. She's written yet another book that grabs me by the heart and pulls me into the story and makes me fall in love with characters I can't forget. Reunion stories are my favorites, and I was already a little bit in love with Billy. Thus, it's hardly surprising that this is my favorite of a trilogy in which I loved all three books.

Like the characters that preceded them in the Crooked Creek series, Maddy and Billy are messy, complex characters scarred by their pasts. Some of the scars cover wounds that are still infecting the present. Billy’s scarred face, a visible reminder of his violent childhood, is a metaphor for the psychic wounds those childhood experiences inflicted. Maddy’s wounds are from emotional rather than physical violence. She casts herself as Billy’s defender from an early age. Her focus is on seeing Billy succeed not only in hockey but in becoming the man she believes him to be. When Billy’s desire to belong in the world where his talent has taken him leads him to betray her belief in him and, by extension, in them, she is devastated. She feels that she has lost not only Billy but also her very self.

O’Keefe both operates within the conventions of romance and undermines those conventions. The chemistry between Maddy and Billy is so powerful that not even betrayal and a separation of well over a decade can diminish it. Sex scenes provide not merely the almost mandatory sizzle of current romance fiction but also a means of revealing the emotional vulnerabilities of the protagonists. And Maddy and Billy’s story gives lie to one of the great myths of romance. Love does not conquer all, at least not until it is accompanied by self-knowledge, self-acceptance and forgiveness. If I were creating a sound track for this novel, I’d include Roy Orbison’s version of Boudleaux Bryant’s “Love Hurts” as a recurring theme: “Love hurts and scars. / Love wounds and mars / anyone not tough or strong enough / to take a lot of pain.”

Secondary characters add dimension and complications to the central story. Readers who share my series addiction will enjoy seeing Luc and Tara Jean from the first book, but their appearance is purposeful rather than pandering to readers. They serve to give context to Billy’s character. In the same way, Ruth, an intriguing character in her own right, reveals Maddy’s isolation and loneliness. The children, Becky and Charlie, heartbreakingly real, play a vital role.

When I reviewed Can’t Buy Me Love, the first Crooked Creek book, I referred to a quotation I found thematic: “We’re more than our mistakes. . . . More than our pasts. We can be more than the things we let define us.” Although the words do not appear in Crazy Thing Called Love, the truth they embody resounds throughout this book, and indeed, throughout the entire series.

Recently I’ve heard some complaints about the lack of tough, flawed, credibly 21st-century characters in contemporary romance. It’s clear those readers haven’t discovered the books of Molly O’Keefe. Her Crooked Creek books are among the most courageous and complex romances I’ve ever read. I highly recommend this book. It ensured that I started my Best of 2013 list early.

Addendum: I have it straight from Ms. O’Keefe that while Crazy Thing Called Love officially ends the series, there’s a possibility that Ruth will get her HEA—perhaps in a novella. I’m keeping my fingers crossed.