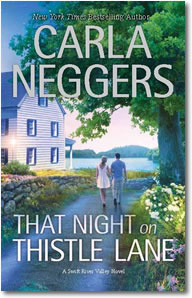 Carla Neggers returns to Knights Bridge, Massachusetts, for the second book in her Swift River Valley series. Librarian Phoebe O’Dunn is a sensible woman. The mystery of the hidden attic room in the Knights Bridge Library and the glamorous gowns it contains may stir her imagination but she resists the encouragement of her sister Maggie Sloan and her friend Olivia Frost to wear one and join them at a charity masquerade ball. But after Maggie (wearing the gown Grace Kelly wore in To Catch a Thief) and Olivia (wearing the gown Audrey Hepburn wore in Breakfast at Tiffany’s) leave, the combination of wine and an Edwardian gown fit for a princess weakens Phoebe’s resistance. With a wig and a mask to complete her disguise, Phoebe dons the silk satin gown and sets out for the ball.

At the ball, this Cinderella meets not a prince, but a swashbuckler in black whom she calls D’Artagnan after the adventurer and swordsman who is the hero of the Dumas novels. Their dance is a scene from a romantic dream, but Phoebe, like a fairy tale princess, runs away before she is recognized. The last thing she expects is that her swashbuckler will turn up in Knights Bridge. The swashbuckler is Noah Kendrick, the billionaire genius who founded NAK, a high tech company that has recently gone public, leaving Noah at loose ends. He’s in Knights Bridge because his best friend and former NAK associate, Dylan McCaffrey, is there with his fiancée, Olivia Frost.

Although the initial attraction between Phoebe and Noah is strong, they are both wary of relationships. At twenty, Phoebe thought she was on her way to her own fairy tale ending, but the man she expected to marry jilted her mere days after her father died in an accident. Phoebe stopped believing in romance outside the covers of books and filled her life with her family and her work at the library. Dylan’s experience with women more interested in what his money can do for them than in him as a person has made him a skeptic in the romance department. Their mutual wariness is about all the wealthy entrepreneur from San Diego and the small-town librarian have in common. Yet neither can forget the moments they shared at the ball, and the more they see of one another, the steadier the flame of attraction burns.

Their romance plays out against a low-stakes mystery and a subplot involving Phoebe’s sister Maggie and her estranged husband Brandon. Knights Bridge is an appealing setting, and the family dynamics and community history add interest to the story.

Phoebe and Noah are likeable characters, but their relationship moves slowly. I enjoyed all the details about the dresses in the secret room, but I found the mystery more distraction than vital thread in the story. The beginning had a certain fairy tale appeal despite its clichés, but the development of Phoebe and Noah’s relationship seemed missing some essential ingredient. I found myself more engaged with the secondary romance. I liked Secrets of the Lost Summer, but I thought That Night on Thistle Lane was a weaker book. Still, I like Knights Bridge and its people enough to at least check out any other books in the series.