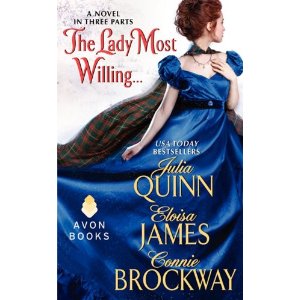 Some said the legendary storm of 1819 that screamed down from the north pushed madness ahead of it.  Others said the only madness exhibited that night was born inside a bottle of contraband whiskey.  And then there were those who claimed that magic rode vanguard to the snow, sweeping the halls of Finovair Castle and inspiring its laird to heights of greatness...

Or something along those lines.

Determined to secure his holdings and frustrated with his two nephews, one half-French and the other half-English (the heir and the spare),  for not stepping up to the plate and finding good Scots lasses to wed, widowed and childless laird Taran Ferguson decides to take matters into his own hands.  Emboldened by plenty of whiskey and with his equally inebriated clansmen at his side, they snatch three eligible heiresses from a local ballroom - Miss Fiona Chisholm (bit long on the shelf but with a tidy fortune), Lady Cecily Tarleton (English but very, very rich) and Miss Marilla Chisholm (young, rich and the most beautiful lass in the highlands) - and bring them back to Finovair Castle and the unsuspecting nephews.  Everything goes according to plan until they arrive at Finovair and discover the less than adept kidnappers have also snatched Catriona Burns (nice lass, no fortune) and the Duke of Bretton (who had the misfortune of being asleep in the getaway coach...which happens to belong to him).  And then, the snow starts to fall.  We're only a few pages into the first chapter of this story in three parts and, already, the fun has begun!

While each author telling the story of one of the couples injects her portion of the book with her own unique writing style, the flow of the book is so cohesive, so seamless that were it not for the chapter headers it would take a few minutes to realize that the writing had transitioned from one author to the next.

Julia Quinn is first up with her trademark humor and charm as she tells the story of Catriona Burns and the Duke of Bretton.  A more unlikely couple would be hard to find.  She's the feisty, outspoken daughter of a Scots squire and he's been a proper duke since infancy.

Her brows rose a fraction of an inch.  "Do you mean," she asked with careful disbelief, "for me to continue the story about Taran Ferguson going bare-arsed through the village?"

"Precisely," he clipped, since if he spoke in any other tone of voice, he might have to admit to himself that he was blushing.

Which he was quite certain he did not do.

But, trapped by snow and conveniently forgotten by Taran (they were the ones taken by mistake, after all and Taran certainly doesn't want one of his nephews' potential brides setting their cap for the Duke), the two are left to their own devices.   Proximity leads to conversation. Conversation leads to liking.  And liking leads to so much more.

Eloisa James brings her delicious command of language and wonderful sense of romance to the story of Fiona Chisholm and Taran's nephew, Byron, Lord Oakley.  Stern and serious, Byron will never wed a woman with a soiled reputation, not after finding his fiancee doing the horizontal waltz with her French dancing master mere days before their wedding.  He first sets his eye on Marilla Chisholm -  she is, after all, quite beautiful and has a pristine reputation - but it only takes one encounter to send him fleeing in another direction; that of her older, bookish sister.  The one with the ruined reputation.

He didn't look frightened:  more the opposite.  He looked like an enraged beast, roused from a peaceful den by an impudent intruder.  Fiona loved it.  Her heart sped up, which was utterly perverse.

"No," Fiona said, tipping back her head in order to see his expression.  "I've been right here all along.  Something lacking sense, no doubt."

"Oh, I can see that,"  she said with some enjoyment.

"And I can see that you merely pretend to be a quiet, bookish young lady."

"Well, I did tell you that I had a bad reputation," she said, grinning at him the way she smiled only at her closest friends because...well...this was just so much fun.

At first, he looks to her to save him from her sister's enthusiastic clutches but he gradually realizes this is a woman with whom he could spend his life.  This is a woman who challenges him, intrigues him, makes him a better man, makes him happy.  If only he can overlook that pesky reputation.

Connie Brockway brings her quirky sense of humor and fun to our third story.  Lady Cecily's parents have a love match and that's what she wants for herself.  Her mother has always told her that she will know her future husband when she meets him.

...upon their arrival at Finovair Castle, a scandalously handsome man with a head of loose black curls and a wicked smile had taken her hand and looked down at her with beautiful, black-lashed, laughing eyes, and she had realized, Mama was right.

Robin, Comte de Rocheforte is well known for his easy humor and love of life.  "Unapologetic scoundrel, self-proclaimed pauper, the scandalous Prince of Rakes;" he doesn't know it yet but Robin's fate is sealed in that breath-stealing moment when he takes Lady Cecily's hand and looks deeply into her eyes.  As captivated as she, Robin nevertheless keeps his distance, certain that he would be the worst possible husband for the enchanting lady who is slowly but surely capturing his heart.  Just as he begins to think he may be deserving of the lady, a misunderstanding convinces him otherwise but Lady Cecily knows her heart, knows Robin is the man for her and is determined to show him their future happiness depends on their being together.

If you like thought provoking romances, steeped in emotion and fraught with turmoil then this book is probably not for you.  But, if you enjoy love, laughter, witty banter and delightful entertainment from beginning to end then I encourage you to pick up a copy of The Lady Most Willing...

When Julia Quinn, Eloisa James and Connie Brockway get together it is, quite simply, magic.

What book have you read lately that had you smiling from first page to last?  I have a copy of The Lady Most Willing...for one randomly chosen person who leaves a comment.  (U.S. and Canada addresses only)