I don't know about you but there's nothing I enjoy more on rainy winter days than snuggling under a cozy blanket with a mug of hot chocolate and a good book.  Since it's been raining practically non-stop for the past week,  I've been doing a lot of snuggling...and reading.  And thanks to the handy dandy convenience of my e-reader, I don't even have to leave the comfort of my couch to buy the new books that catch my eye!  Here are a few stories  I've recently enjoyed.  These three are Christmas themed but they are wonderful romances that can be enjoyed any time of the year.

Wed at much too young an age, Sebastian, Earl of Kinvarra and Alicia Sinclair, his countess were both ill-equipped to deal with the realities of marriage.  When the bride is terrified of physical intimacy and the groom is too young and selfish to be concerned with anything other than his own pleasure, disaster is sure to follow, as it did with Sebastian and Alicia, sending one to the continent for an extended tour and the other to London.

Estranged for past ten years, Alicia is on the verge of taking the monumental step of engaging in an affair when a carriage accident in the middle of a Christmas Eve snowstorm brings her face to face with Sebastian. Forced to take refuge from the storm in an inn. they soon realize that the feelings they had for one another when newly married have lurked below the surface for all their years apart.  But, while desire forges to the surface, there are tender emotions, long held animosity and a fear to trust that threaten to keep them apart still.  Will Sebastian be able to convince Alicia that he has matured over the years?  Will Alicia have the courage to overcome the fears of that young bride and meet him as an adult woman with adult desires?  Will they succumb to one magical night then go their separate ways or discover a love that will last a lifetime?

Anna Campbell packs so much emotion into four short chapters that I felt as if I was reading a complete novel.  A heartwarming, emotional tale that sizzles; I highly recommend The Winter Wife.

Trapped in an avalanche of snow that buries the General Store, it is only the voice of the young girl trapped with him that gives loner Daniel Hobart the will to live.  When he's rescued, Daniel is stunned to discover that he was the only person in the store and the widower, haunted by the deaths of his wife and child, wonders if he's finally lost his mind.  When Hannah continues to appear to him however, he's convinced the young girl is real and has reached out to him for help.  He was unable to save his own child.  He's not about to let Hannah down, even if the whole town thinks he's crazy.

When her daughter, Hannah disappeared on their journey to New Hope, Lacy Ellis was devastated.  She searched and searched but found no trace and now, one year later, the young widow is just beginning to come to terms with the loss of her only child when Daniel Hobart appears in town with claims of having seen her.  Lacy wants to believe him but his tale is so outlandish.  Dare she hope?  Her brothers want to run him out of town but when Daniel insists he's going to search for Hannah, Lacy is determined to go with him.

As Daniel and Lacy re-trace the route of the previous year's journey, they find in one another understanding, compassion and an attraction that's been simmering since they first glimpsed each other on the streets of New Hope.  As the attraction deepens and feelings emerge, Lacy and Daniel are given a second chance at love but will that fragile emotion withstand the crushing disappointment if they are unable to find Hannah?  Or, will this couple who have known more than their share of heartbreak be given a second chance with a miracle in New Hope?

Kaki Warner is one of my favorite authors.  When I read one of her books, I'm not just reading about people and places; I'm experiencing her characters' journeys with them.  Their hopes and dreams, heartbreak and despair, joy and salvation.  I feel it all.  If you've read Warner, you already know what I mean.  If you haven't, this novella is a perfect way to sample this author's immense talent. 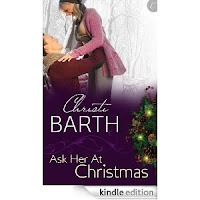 Caitlin McIntyre has been in love with her best friend, Kyle Lockhart forever but would never jeopardize their friendship by admitting her feelings so she's understandably shocked - and overjoyed - when Kyle kneels in front of her and proposes.  Unfortunately, he's only practicing for the proposal he plans to make to Monica, the daughter of the man who will be merging his business with Kyle's father's business.  Kyle, a computer nerd, has never been able to please his father, the business shark but he's sure that marrying Monica, a woman he doesn't love and really doesn't even know all that well, will finally be the act that proves him worthy in his father's eyes.

Caitlin and Kyle have been there for each other through thick and thin, happiness and heartbreak and even though it breaks her heart to do so, Caitin agrees to help the clueless Kyle come up with a wonderful way to propose before Christmas.  That's what best friends do.  However, it gradually becomes clear that there's going to have to be a change. Caitlin can't imagine living in the same city with Kyle and his wife, especially when the future wife is a witch of a woman who makes it abundantly clear that Caitlin will have no place in their life.

Eventually, it becomes clear that Kyle will have to make a choice and it's not an easy one.  There are some bumps in the road along the way and one major pothole that broke my heart but I was willing to forgive, as was the character who was let down.  In the end though, the author brings it all together in a very satisfying manner that had me sighing with happiness.

I love the friends to lovers trope and Barth has created one that I enjoyed.  Filled with humor, emotion, heartache and romance, it's a great story to snuggle up with on a cold winter afternoon.

This novella can be purchased on it's own or as part of the anthology, Romancing the Holiday.

So what are you reading these days?  Have you jumped on the digital bandwagon or do you prefer print?  Do you snuggle on the couch or prefer a different reading location?  Do you read holiday stories all year long or just during December?  And, for the really important question, what's your snack and beverage of choice for those rainy reading afternoons?