Guest Review - - Hero of My Heart 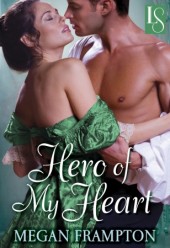 If the definition of hell is a place where there is no hope, Alasdair Thornham, Marquess of Datchworth, is in hell. Psychically wounded by his war experiences and grieving for his dead (his parents, his brother, his wife and unborn child), Alasdair is consumed with guilt and self-hatred. He is well on his way to the opium-assisted oblivion that he seeks when circumstances awaken a not-quite-extinguished spark of chivalry. A young woman, clearly drugged, is being auctioned to the highest bidder. Alasdair saves her, and the sense of responsibility he feels for her postpones his plans for self-destruction.

The young woman is Mary Smith, a vicar’s daughter. Her father’s death has left her at the mercy of her brother, a man so corrupted by his gambling addiction that he’s willing to sell not only everything their father has left but also his sister for more funds. But although Mary is penniless and helpless to prevent her brother’s abusing and exploiting her, she has something that the wealthy, titled Alasdair lacks—a modicum of hope. Her father revealed a secret on his deathbed that shattered Mary’s sense of self but also held the possibility of help if she can only get to London.

Alasdair is a reluctant knight and his armor is considerably tarnished, and Mary is wary of trusting anyone, particularly a man. But as the two work together to combat threats by Mary’s brother, who has discovered another way to make money off his sister, and Alasdair’s cousin and heir, who has plans to have Alasdair declared mad, the connection between them grows stronger. The powerful physical attraction that has been present almost from the beginning is enhanced by growing emotional ties.

They are determined to save one another. Alasdair decides that he will marry Mary to preserve her reputation and ensure that she will be financially independent before he resumes his original plan to destroy himself. Mary sees Alasdair’s pain and longs to help him. She recognizes her limitations, but she believes that she can “do something for him: make him, if not whole again, at least not as broken.” These two, neither of whom believes they deserve the other, must work their way past misunderstandings and miscommunication before they can accept the healing and transformation that love can effect.

Frampton gives readers unconventional characters caught in events that test them physically, emotionally, and morally. This is not a perfect book. The villains conveniently disappear with little effort required of anyone, and Alasdair’s final recovery from his opium addiction is too easy. But these are flaws that can be forgiven when set against the powerful characterization of a flawed hero and heroine and their journey, literal and metaphoric, to healing and wholeness.

There’s ample sizzle for readers who like their romances hot, but it doesn’t come at the sacrifice of emotional punch. If you enjoy romance novels that are a little different, more than a little dark, and centered on love’s redemptive power, I recommend Hero of My Heart.

I have a weakness for romance novels that make use of poetry. When the poems are by a favorite poet, the story earns bonus points. I love that a book of John Donne’s poems plays a significant part in Hero of My Heart, and I’m still smiling because Mary reads aloud Donne’s aubade “The Sun Rising,” a poem I love for personal and teacherly reasons. I thought the poems were particularly appropriate since this is an April release and April is National Poetry Month. You can read a good romance and join in the national celebration of poetry and its place in American culture at the same time.

Posted by pjpuppymom at 7:50 AM