(at times edging toward 4 stars) 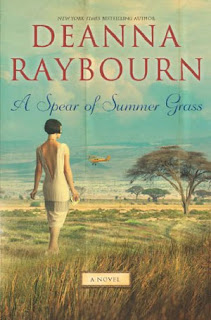 Delilah Drummond is her mother’s daughter—an often-married socialite who excels at spending money and flirting with scandal. But when Delilah’s most recent husband commits suicide immediately after receiving divorce papers and Delilah, who has maintained her own name, refuses to surrender the royal jewels that she has inherited from the man who made her his widow before she could make him her ex and refuses to adopt an appropriately remorseful attitude, the resulting scandal reaches international proportions. There are rumors of an investigation being opened, and her maternal grandfather in Louisiana is making noises about cutting off all financial support. Delilah’s mother, her favorite former step-father, and her lawyer and former husband #2 are in agreement that Delilah must leave Paris.

Delilah refuses to consider America where Prohibition is the law of the land, but she has fond memories of the fascination her step-father’s African diary held for her when she read it as a teenager. Thus, when he offers her Fairlight, the home he built on the banks of Lake Wanyama, Delilah agrees to accept exile from Europe. Two weeks later, accompanied by a distant Drummond cousin and poor relation, Dora, or Dodo, Delilah sets sail on a British ship for Mombasa. The dutiful, dull Dodo, whose two interests are God and gardens, will serve as a combination chaperone and personal maid.

From the moment of her arrival in Kenya, Delilah begins to learn just how different Kenya is from the world she has left, and yet, strangely, some things remain the same. The violence and beauty of the country leave her weak-kneed. She is still in the Nairobi train station when she sees a man beaten so severely that his blood splashes on her shoes, and before she arrives at Fairlight, she has her forehead marked with the blood of a buffalo she helped to kill, signifying “first African blood.” But her reputation has preceded her, and the lieutenant governor, concerned that she might become involved in escapades that would reflect badly on Kenya, insists that she cannot linger in Nairobi. She soon finds old friends in the area and joins them in a lifestyle that, despite the setting, is as hedonistic as the one she left in Paris.

Delilah also finds that the nursing skills she acquired for service in World War I are useful in this new environment, and she shocks and angers some by her humane treatment of the Blacks in her employ. Through all of these experiences, there is safari guide J. Ryder White, an arrogant, complex alpha with a core of tenderness, who infuriates her, challenges her, and fascinates her. A part of and yet distinct from the British expatriate community, Ryder proves to be a “stayer,” the kind of man Delilah never expected to encounter again. But Delilah must change before her heart is willing to accept that truth.

Raybourn leaves her popular Lady Julia Gray series to give readers this standalone novel that combines historical fiction with murder mystery and a substantial thread of romance. Set amid the decadence of the wealthy in the1920s and three years after Kenya had been declared a British crown colony, the story includes both the sparkle and the darkness of the period. The racial conflicts between the European colonials, the Africans, and the Indians are growing and shaping the politics of the era, and the lavish lifestyle of the European community is a stark contrast to the injustice and exploitation of colonialism. Raybourn uses all of this history in the story of a woman who embodies its contradictions and complexities.

I had a really difficult time deciding how to “grade” this book. Deanna Raybourn is an amazing writer, and her skills are evident from the opening line to the final one. Her vivid descriptions of Kenya frequently made me feel as if I were watching a movie on a theater screen rather than reading a book. That was the effect of this description:

A tiny herd of elephants looked infinitesimal from our lofty height, and when Ryder stilled the engine, I heard nothing but the long rush of wind up from the valley floor. It carried with it every promise of Africa, that wind. It smelled of green water and red earth and the animals that roamed it. And there was something more, something old as the rocks. It might have been the smell of the Almighty himself, and I knew there were no words for this place. It was sacred, as no place I had ever been before.

Her prose is always beautifully lucid and often lyrical as well. When Delilah arrives at Fairlight expecting to see the place she had imagined when she was a child and finds instead a house falling apart, she expresses her disillusionment:

Of all emotions, disappointment is the most difficult to hide. Rage, hatred, envy—those are easy to mask. But disappointment strikes to the heart of the child within us, resurrecting every unsatisfactory Christmas, every failed wish made on a shooting star.

The poignancy of some passages is powerfully moving, as in this passage when Delilah responds to Dodo's question about whether Delilah ever loved any of the men in her life after her first husband:

You close your eyes and suddenly he’s not there anymore. What you loved, or thought you loved, just isn’t there, and there is a man-shaped hole in your memory of where he used to be. The sad part is when it happens when he’s sitting at the same table or lying in the same bed. You can turn and look at him and not even remember his name because he was just a visitor. He was a man who was only passing through your heart, and you never really made a place for him, so he just keeps passing. My husbands since Johnny have been passing men. Not a stayer among them.

At the other end of the emotional spectrum are tiny details that left me with a delighted smile, details such as Delilah’s car, a lipstick-red Hispano-Suiza with leopard upholstery that seems perfect for her and also evoked images of the Hispano-Suiza in P. G. Wodehouse’s Blandings Castle short stories and novels and the book, Fordyce’s Sermons, which Delilah had to balance on her head when learning to walk like a lady. (Fordyce’s Sermons is the 1767 guidebook to female conduct from which Mr. Collins read to the Bennet sisters in Jane Austen’s Pride and Prejudice.)

In the con column is a heroine I could not like. Delilah is at times entertaining, she is more rarely sympathetic, and she is always interesting, but she is also, for much of the book, selfish, shallow, and amoral. She treats her cousin with condescension some times and with careless cruelty at other times. When she spends her last night in Paris with former husband #2, a married man with two young children, she thinks she may even be rendering a service to his wife since he’s jollier after sex with Delilah and the guilt over his infidelity leads him to purchase an expensive present for his wife. The list of her offenses that the lieutenant governor in Nairobi names include “stealing a car outside a Harlem nightclub and driving it into the Hudson” and being “caught in flagrante with a judge’s eighteen-year-old son in Dallas.”  Granted Delilah changes, but by that time, I disliked so many things about her that I could not feel any real connection with her. I’m not a reader who needs to identify with the heroine, but I do, especially with the intimacy between character and reader that comes with a first person point of view, need to like her.

If the vivid evocation of time and place, an atypical heroine and hero, and wonderful prose are sufficient to make you love a book, you may be one of the readers giving A Spear of Summer Grass high marks. If likeable characters are a prime criterion for you, you may, as I did, have mixed reactions to this novel.