What You Didn't Know About Half Moon Hill 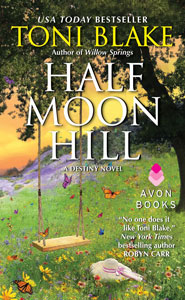 I love visiting Destiny, Ohio, the fictional location of Toni Blake's sexy and heartwarming small-town contemporary romance series.  The sixth book in the series, Half Moon Hill will be released April 30th and features two fascinating main characters:  Anna Romo, a woman kidnapped at the age of five who has recently discovered her real family and Duke Dawson, ex-biker and best friend of Anna's biological older brother, who is dealing with the emotional aftermath of a tragic accident. Here are a few interesting facts from the author about Half Moon Hill.
~PJ

Tessa's brother, Jeremy, was originally supposed to be the hero.  I started planning that as early as Destiny Book 3,  Whisper Falls.  But as the time to write it grew closer, something about it didn't feel right.  I didn't know Jeremy very well, after all. But I did know Duke.  Readers had started writing to me and asking me to give Duke his own book.  You ask.  I listen.  Duke just seemed like a much better match for Anna in my mind - even if only because I knew instantly how much Anna's brother Mike would dislike this.  I loved fleshing out both Anna and Duke as characters as I wrote this story, and I couldn't be happier with the decision to make Duke her hero.

I adore the cover of this book!  But the fun act is - on the original version, the title was hot pink.  Rather gorgeous, I must say! But sadly, I noticed in thumbnail version on my computer screen, it was really difficult to read.

The swing on the cover came before the swing in the story.  I had the cover long before I'd actually written the book, but that gave me the opportunity to add a swing to the story, and I couldn't be more pleased with how that part worked out.

I'm a big fan of butterflies.  In the summer, I spend quite a bit of time stalking and photographing them.  So when I first saw the butterflies on this cover, I was ecstatic.  Then they decided to add more butterflies.  On the original cover, there were only two or three and now I count upwards of a dozen.  I love having a cover with one of my favorite things on it!

I really, truly am very proud of this book.  I love the way both characters developed, I loved revisiting everyone in Destiny and moving their life stories forward as well, and I loved the depth of emotions I got to explore in this story.


Are you a fan of Toni Blake's Destiny series?  Which Destiny couple is your favorite?  Are you looking forward to a story for Duke as much as I am?  Toni is delighted with the butterflies on the cover of Half Moon Hill.  If you were designing a cover, what favorite thing would you want featured on it?

HarperCollins has graciously offered a copy of Half Moon Hill to two randomly chosen people leaving a comment.  (U.S. addresses only, please)

You never know what destiny has in store . . .

A rugged loner and ex-biker-gang member, Duke Dawson is looking for some peace and quiet while recovering from an accident. But when Anna Romo comes wandering through his woods and into his cabin, she completely rocks his world. The last thing he expected or wanted was to find himself hungering after a woman whose eyes held hurt even deeper than his own . . .

Running from a troubled past, Anna is building a new life in Destiny. When she first meets Duke, she's terrified—but something about him calls to her very soul. The hard-bodied rebel is soon helping her turn her new home into a bed and breakfast, and close quarters quickly lead them into her bed. Their passion is palpable, but can she convince a man who has turned his back on life to take the biggest leap of faith of all and fall in love?