Review - - The Summer He Came Home 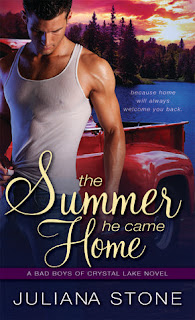 I'm a creature of habit.  I go to bed early and get up with the birds...or in my case, the dogs.  It takes something special to convince me to forego sleep until 2:15 am.  In this case, that something special is Juliana Stone's wonderful new contemporary romance and its I-want-one-of-my-own bad boy hero, Cain Black.

They were the Bad Boys of Crystal Lake, a small town in northern Michigan; more brothers than friends. After high school, they went their separate ways:  Mac to New York City, twins Jesse and Jake to the military and Cain to Los Angeles to pursue his dream of making it in the music business.  More than ten years later, the loss of one of their own brings them home to Crystal Lake for the funeral.  After pursuing their dreams in faraway places, will they ultimately discover that what brings them the greatest happiness is in the little town where it all began?

Cain Black certainly didn't intend to find his future happiness at a funeral.  His life at a crossroads, Cain comes home for the first time in ten years to bury one of his best friends.  Cain's band is on the verge of the success they've been chasing but his personal life has put everything in jeopardy thanks to his cheating ex-wife and his writing partner.  He's no angel but his rock star reputation far exceeds his actual exploits.  At heart, he's a one-woman man and loyal to a fault.  When he meets single mom, Maggie O'Rourke and her  six year old son Michael, Cain decides to stick around Crystal Lake for a while.  Those who believe the publicity machines warn him off sweet Maggie, concerned he's only looking for some summer fun.  However, it soon becomes apparent to Cain that the desire he feels for Maggie is deepening into something more permanent and her adorable son has a firm hold on his heart.  He's ready to consider a commitment to them both but if he can't find a way to break down the walls protecting Maggie's wounded soul and convince her to trust him with her secrets, by summer's end it could be Cain who's nursing a broken heart.

Maggie O'Rourke has finally found peace and security in the small town of Crystal Lake.  The residents have warmly welcomed the single mom and, though they know nothing about her life before appearing in their small town, they accept her at face value and hold her in high esteem. With her business and taking care of an active son, Maggie has no time for romance and the wounds of her past keep her from pursuing any kind of a relationship.  But Cain Black is a man who is slowly breaking down the barriers around Maggie's heart.  Will she learn to trust Cain with her heart and, more importantly, her secrets?  Can a small-town mom who guards her privacy ferociously find happiness with a rock singer who has paparazzi trailing him around the world?

I've been a fan of Juliana Stone's writing since the publication of her debut book.  While I love her paranormal stories, I happily followed her into contemporary with The Summer He Came Home and was not disappointed.  I adore bad boys with a heart of gold and Cain is one of my favorites. By the midway point of the book, I was ready to tell Maggie to take a hike and keep him for myself.  But, alas, I also like Maggie and her son.  The bond that connects the three is so strong that I had to relent and let Maggie keep him. :grin::

Stone has a talent for creating a sense of place in her books.  In her Jaguar Warrior series, she made me feel as if I was in the center of a Central American jungle but with The Summer He Came Home, she took me on a journey of nostalgia by transporting me to the summers of my youth.  I grew up on a lake just outside a small Michigan town and know the sights, sounds and smells of a Michigan summer well.  Stone captures them perfectly.

Stone also excels at creating flawed, intriguing characters who readers want to know better.  In this first book of her new series, she introduces us to a cast of characters who we will come to know better in future books.  Already, I'm invested in their stories and can't wait to travel their journeys with them.

This book was close to a 5 star read for me.  The only thing that kept it from that score was a scene near the end of the book where Maggie and her son are forced to face their past.  While I felt that the scene was necessary, it was too rushed for me; the resolution too quick and too easily moved beyond to be completely believable.  But, that aside, this was a wonderful beginning to what is sure to be another terrific series from Juliana Stone.  I highly recommend that you join me in Crystal Lake!

Do you like bad-boy heroes?  Tell me about your favorites.  I'm giving away a copy of The Summer He Came Home to one randomly chosen person who leaves a comment.  (open internationally to any country where bookdepository.com delivers)