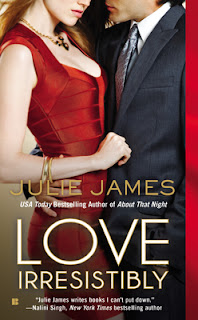 Ladies and gentleman, Julie James has done it again! Love Irresistibly is another winner and has joined Julie’s other books on my keeper shelves. As I’ve mentioned before in a previous review, I don’t believe Ms. James could write a bad book if she tried. Her storylines are always fresh and well-researched, her characters are bright and extremely likable, and the tension between the leads is smokin’. Her heroes are confident and sexy and her heroines are the kind of gals you could see yourself hanging out with or meeting for coffee…kind of like Julie, herself. J


Readers met Cade Morgan in the previous book in the series, About That Night, when he was introduced as the Assistant U.S. Attorney who prosecuted and locked up the illustrious Twitter Terrorist. Of course, when Kyle Rhodes—said Twitter Terrorist—helped the U.S. Attorney’s office apprehend a murderer, the situation was a bit awkward for Cade, though he was appreciative of Kyle’s assistance. In Love Irresistibly, Cade is after a dirty politician and other corrupt Chicago jetsetters, and this time he needs the help of Brooke Parker.


Brooke has worked her butt off to get to the prestigious position of general counsel for Sterling Restaurants. The only drawback is that she works a lot and has little time to date…which explains why her romantic relationships usually last only a few months. But she loves her job and does it extremely well. When Cade Morgan walks into her office asking for her help in order to bug a table at one of Sterling’s upscale restaurants, Brooke is skeptical as she is responsible for protecting Sterling’s interests. She wants details, but there are some that Cade cannot divulge due to the sensitive nature of the case. That’s when some sparks fly.


“Hmm.” He stretched out in the chair, looking effortlessly handsome and every inch the successful trial lawyer in his tailored navy pinstripe suit. “Now, normally, this would be the point when I’d have to give you the tough-guy speech about how, if you were to reveal to anyone the confidential nature of the information I’m about to give you, you could be charged with obstruction of justice and face a possible felony conviction and imprisonment.” He flashed her a dashing grin. “Luckily, though, since you’re a lawyer and obviously know that already, we can skip over the tough-guy stuff. Which is nice, because that part of the conversation can get really awkward.”


He’d come her, to her office, to ask for her help. Now he was threatening her with obstruction of justice charges—and most annoyingly, he was doing it with a smile.


So she returned the favor. “That is nice, Mr. Morgan. Because in response to your tough-guy speech, I, in turn, would’ve had to give you my tough-girl speech, about where, exactly, federal prosecutors who come to my office looking for assistance can stick their obstruction of justice threats.” She smiled ever so charmingly. “So I’m glad we were able to sidestep that whole ugly business. Whew.”


Whew is right! Brooke gives as good as she gets, and where that typically drives other men away, Cade is drawn to her and wants to know just what makes her tick. He can relate to her workaholic nature as he is very much the same in regards to his job. He hasn’t had much luck in the dating department either, particularly because he doesn’t allow women to get to know him—the real him, deep down inside. As he tells it: “It’s all right there on the surface. What you see is what you get.”  It was nice to watch him slowly allow not only Brooke in, but also the teenage brother he didn’t know about. Brooke doesn’t keep up with football, so it surprises her when her best friend Ford and his buddies all know who Cade Morgan—Northwestern University’s Rose Bowl star—is. One of my favorite lines from the book comes from the part where her friends meet Cade.


Unfortunately, she wasn’t going to get a word in edgewise with him right then, seeing how her friends were fawning over him like twelve-year-old girls who’d scored backstage passes to a Justin Bieber concert.


Julie James turns up the heat with the love scenes in this book and my, oh my, they are super sexy. Cade is super sexy. He is one of the hottest heroes I’ve read in a while—completely confident without coming across as arrogant. Absolutely delicious.


I highly recommend Love Irresistibly to any and all lovers of contemporary romance. It is brilliantly-written book that is a must-read! And if you haven’t yet discovered the talent of Julie James—who is one of my select “go to” contemporary authors—please do yourself a favor and pick up her books!


Because I love Julie’s books SO much and am in the giving mood, I would love to give away a copy of the second book in the series, A Lot Like Love, which features scrumptious FBI agent Nick McCall. So tell me, who is your favorite contemporary romance hero and what book is he from? Also, have you read Julie’s books? If so, which is your favorite? One random commenter will win a copy of A Lot Like Love by Julie James. (US addresses only, please)