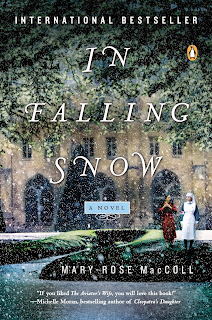 Iris Crane is an old woman, a widow with a bad heart, a short-term memory that comes and goes, and a past filled with wonder, love, and loss that sometimes seems more vivid and real than the present. An invitation to attend a ceremony placing a plaque to commemorate les dames écossaises de Royaumont, the Scottish Women of Royaumont, sixty years after their service sends her back in memory to 1914 when she, an inexperienced twenty-one-year old nurse, left her home in Australia to find and bring home her fifteen-year-old brother, Tom. Iris, who has mothered Tom since their mother died at his birth, feels responsible that Tom ran away to fight the Germans, an opinion shared by her father. Since Tom’s last known location was near Amiens, Iris decides that volunteering with the Red Cross for service in France is her best chance of finding him. This decision is the first of Iris’s crossroads moments. The Iris who becomes part of the hospital staff at Royaumont is not the girl who grew up on her father’s farm. She will never be wholly that girl again--and the changes in the woman she is becoming are only beginning.

Royaumont was not Iris’s destination, but a train delay in Paris set her path crossing that of Frances Ivens, a doctor whose charm is exceeded only by her determination and sense of purpose. Frances, whom Iris thinks of as “like a character from Dickens,” is setting up a field hospital in an old abbey north of Paris. More than its location makes this hospital unusual however: it is a hospital solely staffed by women. Miss Ivens wants Iris to join her staff not because Iris is a nurse but because she speaks French fluently, thanks to her French stepmother, and as a farm girl she presumably knows about drains and things. Miss Ivens and the other women of Royaumont, a mix of nationalities, ages, and political views, take it for granted that Iris is joining them. And she does.  Her admiration for Frances Ivens and her friendship with Violet Heron are defining experiences for Iris. The work at Royaumont, the devastation of war, the prices exacted, and the gifts given each help to shape Iris’s long life as wife, mother, grandmother, and widow.

Interwoven with Iris’s story, mostly past, is the present of her granddaughter, Grace Hogan, an obstetrician married to another doctor and the mother of three children. Grace too lost her mother at birth. Iris and her doctor husband Al brought Grace up, nurturing her, encouraging her gift for medicine, and holding close their secrets. Grace worries about the aging Iris, just one of many concerns for a woman trying to balance her professional responsibilities with her responsibilities as wife and mother. Her life is complicated by a hospital inquiry following the death of a newborn, a heartbreaking diagnosis for her youngest child, and Iris’s plan to attend the ceremony at Royaumont. But it is only when Grace journeys to Royaumont herself that she discovers the woman Iris was, a woman far more complicated and generous than Grace ever knew. Grace discovers as well pieces of her own identity.

In Falling Snow is not a romance novel, although it includes several love stories. I’d classify it as general fiction or women’s fiction; but however it is tagged, it is a compelling, poignant story that lingers in the reader’s memory. Its scope is epic. It covers one woman’s life from the time she is twenty-one through the final years of her life sixty years later, with flashbacks to her childhood, but in a larger sense, it covers the Great War and the new age that followed it. Iris’s loss of innocence is both individual and representative. The juxtaposition of her point of view with Grace’s reveals the different worlds the two women inhabit and the gender biases that persist.

I fell in love with the character of Iris early in the novel when I read the following words:

Lately, I’ve got to wondering whether when you get to heaven you’ll be the age you die or some other age, a favourite perhaps. If I’m the age I die, I’ll be old and most of those I lost will be young. If I’m given a choice, indeed if heaven’s where I’m going, I’ll pick five so I can remember my mother, or twenty so my life is yet to be decided. And then I’ll do it all differently. Ah, regrets. Where do they take us? Not here, not to happiness.

My fascination with Iris increased as the story progressed, as did my affection for her.

Although the novel ends with secrets revealed and questions answered, it raises questions with which we must all struggle, questions about our definition of happiness, the conflicts between self-interest and the sacrifices love sometimes imposes, and the past that never dies however deeply we try to bury it. This is not an easy, comforting book; it challenges, chills, and changes the reader.  But if you cherish books that make you weep, make you remember, and make you think, I believe you will find In Falling Snow a rare and memorable reading experience. I highly recommend this book.

One copy of In Falling Snow is up for grabs today. (U.S. only - no P.O. Boxes)  So tell me, do you enjoy stories that flash back over the span of a character's lifetime?  Have you read any that you would recommend?