Review - - Up to the Challenge

Up to the Challenge
Anchor Island - Book 2
By Terri Osburn
Publisher:  Montlake Romance 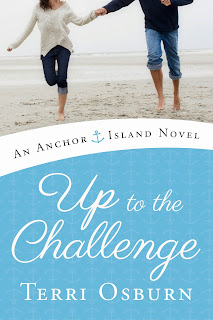 It's said that opposites attract and they don't come much more opposite than Lucas Dempsey and Sidney Ann "Sid" Navarro.  A boat mechanic who dreams of owning her own garage, Sid is a straight talking, potty mouthed tomboy who has no idea of the power lurking in the gorgeous hair and playboy-worthy body beneath her favored baseball caps and over-sized tee shirts with their rude sayings.  Sid loves the laid back atmosphere and small town closeness of Anchor Island and can't imagine living anywhere else. Lucas Dempsey, on the other hand, had fled Anchor Island - where he'd lived in the shadow of his older brother - almost before the ink had dried on his high school diploma. Shunning his small hometown for the big city, the hotshot attorney's priorities have been designer clothes, designer cars, a partnership in his high-powered Richmond law firm and a woman who can help him achieve his goals. Sid is as far off his radar as a woman can get.  Not much encouragement for someone who's secretly been in love with Lucas since high school.

Lucas thought he'd found the perfect woman but then he brought her to Anchor Island to meet his family, left her almost immediately when work called and ended up losing her to his older brother.  He's still smarting over that, even though he's given them his blessing and reluctantly admits his pride was hurt more than his heart.  Given those family dynamics, one can understand why he's not thrilled to be back on the island six weeks later but when a heart attack lands his father in the hospital Lucas steps up to the plate and offers to help manage the family restaurant until his dad's back on his feet. Then his mom asks Sid to help him and the fireworks begin.  These two could start a forest fire with the friction they create and left me laughing more times than not, especially before they realize what's causing all that friction.

A bet as to who can pull in more tips has Sid following a friend's advice and ditching her over-sized tee shirt for the tank top beneath, a move that finally opens Lucas's eyes to all those luscious curves Sid hides from the world.  It's unwrapping the outer package that initially puts Sid on Lucas's radar but as they spend time together and get to know one another, it's the person inside that pulls him in.  And, for Sid, being admired, desired and accepted for who she is is more than she dared to dream.  But they both know their time together is limited. Lucas has a career to return to and a partnership to secure while Sid's dreams are firmly entrenched in Anchor Island.  Are they destined for heartbreak or will they open their eyes to the fact that what they thought they wanted may not be what they need?

Osburn has a real talent for humor and it's clearly evident in this book.  She also has a talent for writing deep, heartfelt emotion and characters that are realistic, multi-dimensional and worthy of this reader's care and concern.   If you're reading this series you already know what I mean.  If not, today would be a great time to meet the wonderful people of Anchor Island through the pages of Up to the Challenge and Meant to Be. I highly recommend the trip.


Have you read any good small-town romances lately?  What do you recommend?