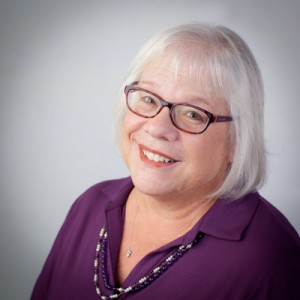 She's back!  I'm always happy to welcome Maggie Robinson to the blog because that means she has a new book out.  Today, it's the second book in her Ladies Unlaced series, In the Heart of the Highlander.  Have you started reading this series yet?  I highly recommend both the first book, In the Arms of the Heiress and In the Heart of the Highlander.  They're sexy, heartwarming and full of fun!

Today is release day for In the Heart of the Highlander, and I’m delighted to spend it with my friends at the Romance Dish! It’s the 14th book to have my words somewhere in it, which to me is kind of surreal. I still feel like a “new” author, but I guess I’d better face facts that I’m just old in fiction and fact, LOL. 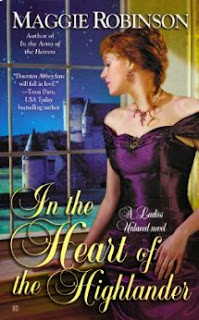 And speaking of old, my heroine Mary Arden Evensong has been masquerading as an elderly lady for four long years, and the gray wig and glasses are getting elderly, too. After solving everybody else’s problems through the family employment agency, she’s just itching to break out and have an adventure of her own. She seizes her chance when a hunky Highlander, Lord Alec Raeburn, comes to her “aunt” for help, spilling his deepest secrets in the process.

Now Mary is in a difficult position—she knows what she’s not supposed to know. And when she inadvertently spills the beans to Alec during an intimate moment, his trust in her is broken. Here’s the scene when Alec discovers that Mary has never been who she said she was.

“Tricky? I’ll say it was tricky! Good Lord! And here you’ve convinced me you’re pure as a Scottish snowstorm.”

“I am! Or I was before I propositioned you. I’ve never wanted to bed a client before. It’s not at all professional,” Mary said with no apparent irony.

Alec was suddenly conscious that he was stark naked. Mary had had the good sense to wrestle a sheet over herself.

“Four years. You’ve been pretending to be an old lady for four years? I suppose the grocery store nonsense is all a myth.”

“Oh, no! It’s perfectly true. My brother runs the family business now, and I was trapped, and terribly, terribly bored, if you must know the state of my mind. When Aunt Mim suggested I come to London to help her, I jumped at the chance.” Mary was sitting straight up now, her stubborn little chin jutting out. Her nipples, too, under the worn sheet.

Alec turned away. “Help her! The things you’ve seen and done . . .” He was quite overawed, if they were telling the truth to each other now.

“Well, I had to! Her business would have suffered irrevocably if word had gotten out she’d turned it over to her ignorant twenty-five-year-old niece. She has dealt with rather delicate matters since well before the turn of the century. I had the agency’s mission to fulfill.”

“‘Performing the impossible before breakfast.’” Alec quoted back to her. “I’ll be damned. So it was you under that horrible hat all along. What a little actress.”

“You’re a wordsmith, too.” He reached for his trousers.

“Getting dressed. I suggest you do the same.”

Mary’s lip quivered. “You meant you won’t finish what we started?”

“I don’t believe I’m in the mood. Isn’t that what you ladies say?” Alec asked, feeling inexplicably betrayed. Really, what did it matter to him if she’d dressed as a dwarf or in sackcloth and ashes these past four years? She had accomplished what he’d hired her for—Bauer was no longer employed at the spa and Edith was avenged.

“I wouldn’t know. I’m not a lady, just a grocer’s daughter.” There was the chin again.

“And a liar, don’t forget. A charlatan.” A chameleon, who turned from doddering dowager to pocket Venus.

Mary’s lips curled. “What makes me different from your actress friends, then? Don’t they lie with every word onstage? You don’t seem to mind them. A dozen of them at least if the gossip rags are accurate.”

Hoisted on his own petard. Damn her for throwing his reputation back in his face. “All the world is not a stage, contrary to that Shakespeare fellow, Miss Arden. Miss Evensong. Whoever,” Alec replied, tangling his foot in the leg of his pants.

“You hired me to lie,” Mary reminded him.

“I’ve told you the truth now! But I won’t beg you to come back to bed. No doubt I’m nothing like the women you’re used to.”

No, she jolly well was not. Alec let out an exasperated sigh, and not at his evident inability to get back into his own pants. “Are you trying to get me to compliment you?”

“Certainly not!” Mary huffed. “I would never want you to say or do anything that goes against your beliefs. It’s clear you have a disgust of me.” She clutched the sheet tighter. “This has all been a terrible mistake. You can get us to the evening train and we can forget about the whole affair. If you wish,” she said with some brutality, “I shall give you a full refund.”

“A full refund! I don’t want my money back, you daft woman! I just don’t like being used. You’ve played me for a fool, Mary Arden . . . Evensong. You might have told me at the beginning who you really were. All those blushes and stutters—by God, if they gave out acting awards, you’d be first in line to get one!”

“I haven’t been acting with you!” Mary said hotly. “I just wanted a little experience. Is that such a crime?
You have no idea—” She broke off, probably deciding he didn’t have an idea and never would have.

“You know much more than I thought, if you could deal with the Burleigh mess.”

“Anyone can read a book, Alec. One hears things at school, even over the grocery counter, if you can believe that. Aunt Mim was always around to give me advice, too. I am every bit as innocent as you thought. Or I used to be,” she reflected, reminding him of all the things they’d done together the past few days.
Wet things. Wicked things. Warm kisses on her sweet puckered mouth and warmer ones where they really counted.

“Innocent,” Alec snorted, but he didn’t try to stand up. By God, the woman was a witch.

“Innocent,” Mary affirmed. “But perhaps there will be someone in London to relieve me of my unwanted virginity. Someone with fewer scruples than you have, if that’s possible.”

Alec felt the hot color wash over his face. “I’ll show you scruples,” he growled, and tugged his foot out of his pants.

Can you keep secrets without spilling them? Have you ever tried to help your family or friends in some way and then regretted it? I’ll give away a copy of In the Heart of the Highlander to one commenter!

Email ThisBlogThis!Share to TwitterShare to FacebookShare to Pinterest
Labels: Giveaway, In the Heart of the Highlander, Maggie Robinson, Todays Special