Review - - The Trouble with Christmas 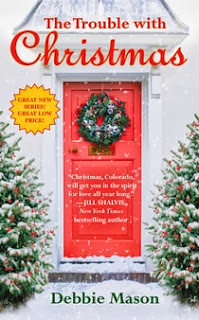 Bad enough that she's been dubbed "the Grinch who killed Christmas" by the media but now she's on her way to Christmas itself.  Madison Lane is confident of her research; knows she was right when she advised her boss to pull the plug on a resort development in the small Colorado town of Christmas.  Now her boss is making her travel there to convince the angry residents of Christmas that the decision was right for them too. Growing up on the wrong side of the tracks in another small town, Madison's memories of those years are not filled with fondness. She doesn't want to be in Christmas any longer than absolutely necessary and has a clear plan: fly from New York City to Denver, rent a car to drive to Christmas, give her presentation and be back in Denver in time to catch the red-eye back to the big city.  You know what they say about best laid plans...

A hometown boy, Sheriff Gage McBride loves Christmas and the people who live there.  Gage has spent his life taking care of others:  the two daughters he's raised since his ex-wife deserted them for a country music career when the girls were babies, the feisty, elderly aunt who keeps him on his toes with her antics and the friends and neighbors who he's sworn to serve and protect.  The survival of their businesses and their town depend on the new resort and he's not about to let some big city executive sail into town and derail their dreams.  Of course, he never expects the hotshot exec to make his heart race or his aunt to take matters into her own mischief-making hands...

Debbie Mason has created a humorous, heartwarming tale that tugged at my heartstrings while tickling my funny bone.  Gage and Madison are characters I cheered for and cared about.  Madison is a real fish out of water in Christmas; she's buried her tumultuous small-town upbringing and become a big-city woman through and through.  She's prickly, doesn't trust easily and seems to attract trouble from the minute her rental car takes out the giant Santa "Welcome to Christmas" sign at the edge of town.

A deer leaped from the woods, darting in front of her.  She braked hard, the car fishtailing as she slid along the road.  From behind a cluster of evergreens at the side of the road, a twelve-foot Santa holding a "Welcome to Christmas" sign seemingly sprang out in front of her like a giant jack-in-the-box.

Madison screamed.  Her foot mistakenly jumped to the gas instead of the brake.  She watched in slow-motion horror as the car kept moving and crashed into the sign.  Santa loomed, teetered, then fell on the hood, his maniacal , smiling face leering at her through the cracked windshield.

Her last thought before the airbag slammed into her face was that she'd finally succeeded in killing Santa.

Mason gradually peels back the layers of our heroine to uncover the yearning heart within but is that yearning heart enough to keep her in Christmas or will an end run by her boss's conniving nephew send her running back to the city to save the career for which she's worked so hard?

Gage is one of those guys who makes me smile, laugh and sigh.  He makes me want to head for the kitchen and start baking, like the single women of Christmas who have him in their sights. He devotes his life to his daughters and is hesitant to open that emotional door and let someone else in.  But when he finally does, a visit from the past and a threat from the present do their best to close it again.  Will they succeed or will Gage and Madison get their Christmas miracle?

The secondary characters - from Gage's daughters to his aunt and her two "old men" sidekicks to the equally eligible mayor, Madison's best friends, her new friends and even the ex-wife - create a community that I enjoyed visiting and hope to visit again. There are many stories here just waiting to be told!