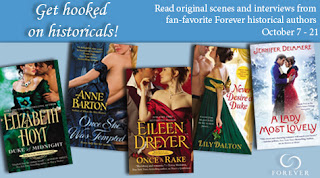 We're delighted to welcome the Forever "Get Hooked on Historicals" blog tour to the Romance Dish today.  This tour celebrates new books from historical romance authors Elizabeth Hoyt, Eileen Dreyer, Jennifer Delamere, Anne Barton and Lily Dalton.  Research is an intrinsic part of writing a good historical romance and good research usually helps me learn something while reading that romance.  What, we wondered, have the creative minds behind those books learned from their research? Read on to discover the most interesting thing each of our five authors has learned from researching.

“What is the most interesting thing you learned from researching?”

Ha! Lots. Recently I learned that actresses in the Georgian period didn't have nearly the bad rep as they did later—most were professional women without "protectors." Also, there were a lot of women playwrights.

WHEN A MASKED MAN . . .
Twenty years ago Maximus Batten witnessed the brutal murders of his parents. Now the autocratic Duke of Wakefield, he spends his days ruling Parliament. But by night, disguised as the Ghost of St. Giles, he prowls the grim alleys of St. Giles, ever on the hunt for the murderer. One night he finds a fiery woman who meets him toe-to-toe-and won't back down . . .
MEETS HIS MATCH . . .
Artemis Greaves toils as a lady's companion, but hiding beneath the plain brown serge of her dress is the heart of a huntress. When the Ghost of St. Giles rescues her from footpads, she recognizes a kindred spirit-and is intrigued. She's even more intrigued when she realizes who exactly the notorious Ghost is by day . . .
DESIRE IGNITES A DANGEROUS PASSION
Artemis makes a bold move: she demands that Maximus use his influence to free her imprisoned brother-or she will expose him as the Ghost. But blackmailing a powerful duke isn't without risks. Now that she has the tiger by the tail, can she withstand his ire-or the temptation of his embrace?

The author of the New York Times bestselling Maiden Lane series and the Legend of Four Soldiers series as well as the Prince Trilogy, Elizabeth Hoyt writes "mesmerizing" (Publishers Weekly) historical romances. She also pens deliciously fun contemporary romances under the name Julia Harper. Elizabeth lives in central Illinois with three untrained dogs, two angelic but bickering children, and one long-suffering husband. Central Illinois can be less than exciting, and Elizabeth is always more than happy to receive missives from her readers. You can write to her at: P.O. Box 17134, Urbana, IL 61873 and connect with her online at Facebook and Twitter.

Eileen Dreyer, ONCE A RAKE:

Oh, that's a tough one. I've learned so much. I think that for this trilogy it is that the Regency period was a true Renaissance period for amateur scientists, and that those scientists made amazing discoveries. Men and women of leisure made break-throughs in every science from astronomy to chemistry to physics to paleontology. For instance, there was a sixteen-year-old girl named Mary Anning who lived in Lyme Regis (and makes a cameo in ONCE A RAKE) during that era, who discovered the first entire, intact dinosaur skeleton. Not only did Mary, an uneducated girl, make some of the most dramatic contributions to the new science of paleantology, she opened the door through which Darwin walked, and challenged her contemporaries' belief in God (if God was infallible, how could there be evidence of an animal that no longer walked the earth. How could God make a mistake?). 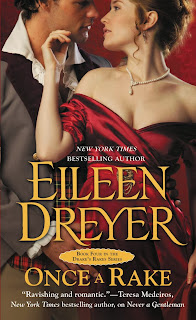 All he wants is her help . . .Colonel Ian Ferguson may be a rake, but he's no traitor. Accused of trying to kill the Duke of Wellington, the disgraced Scotsman is now a fugitive-from the law, the army, and the cunning assassin who hunts him. Wounded and miles from his allies, Ian finds himself at the mercy of an impoverished country wife. The spirited woman is achingly beautiful . . . and hiding some dangerous secrets of her own.
All she needs is his heart . . .
She was a child nobody wanted. Now for Lady Sarah Clarke, holding on to her vanished husband's crumbling estate is her final chance to earn respectability. She knows that hiding the devastatingly handsome Ferguson will jeopardize her home. Common sense demands that she turn him in. But a single, delirious kiss shatters her resolve . . . and awakens a passion that neither of them can escape.

New York Times best-selling author Eileen Dreyer has won five RITA Awards from the Romance Writers of America, which secures her  fourth place in the Romance Writers of America prestigious Hall of Fame. Eileen is an addicted traveler, having sung in some of the best Irish pubs in the world.  Eileen also writes as Kathleen Korbel and has over three million books in print worldwide. Born and raised in Missouri, she lives in St. Louis County with her husband Rick and her two children. Connect with Eileen online at Facebook and Twitter.

Jennifer Delamere, A LADY MOST LOVELY:

When doing research for A Lady Most Lovely, I came across an amazing tidbit about a shipwreck off the southern coast of Australia. A racehorse aboard that ship survived by swimming seven miles to the shore. That’s how the story of Tom Poole and his stallion was born. 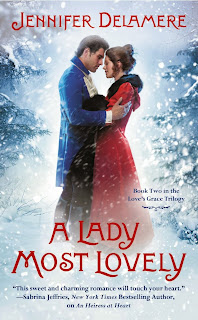 A Heart of Gold
Socialite Margaret Vaughn is the wealthiest heiress in London-or so everybody thinks. Saddled with debt left by her father, she agrees to marry a rich man who can save her family's estate. But when her fiancé turns out to be just another poor social climber, Margaret faces financial ruin-and social humiliation. Just when she thinks all is lost, she finds an unlikely angel in Tom Poole . . .
After amassing a fortune in the gold fields of Australia and surviving a harrowing shipwreck, Tom Poole is the toast of London society. Yet despite his newfound fame, he's never forgotten his own humble beginnings. When he learns of Margaret's plight, he offers her financial assistance-but his interest is not strictly business. Taken with her beauty and grace, the rugged adventurer wants nothing more than to win Margaret's heart. But can he convince the proper, refined lady that, despite their social differences, they are a match made in heaven?

The youngest child of a Navy pilot and a journalist, Jennifer acquired a love of adventure and an excitement for learning that continues to this day. She's lived in three countries and traveled throughout the U.S. An avid reader of classics and historical fiction, she also enjoys biographies and histories, which she mines for the vivid details to bring to life the characters and places in her books. She resides with her husband in North Carolina--where, when not writing or dreaming up romantic adventures for her characters, she can be found fantasizing about her next ski trip or European vacation.  Connect with Jennifer online at Facebook and Twitter.

Anne Barton, ONCE SHE WAS TEMPTED:

The Portrait of Madame Recamier (1802) served as inspiration for my heroine’s scandalous portraits. Though the beautiful young woman in the painting, Juliette, was known for being kind and affectionate, she didn’t get her own happily-ever-after. Married at the age of fifteen to a man thirty years older—and who apparently had an attachment to her mother—Juliette was still a virgin at the age of forty. At least the style of sofa that she liked to recline and pose on was named after her—the recamier. 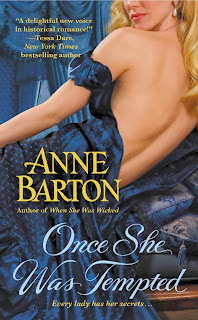 A PORTRAIT OF A LADY. . . or is it? The risqué painting owned by Benjamin Elliot, the earl of Foxburn, features a stunning beauty with sapphire eyes, golden hair, and creamy skin. Ben recognizes this particular English rose the instant he meets her-though she's wearing considerably more clothing. In person, the demure debutante is even more irresistible . . .
In desperate need of money for her sick mother, Daphne Honeycote had posed for two scandalous portraits. Now she must hide her secret to save the Honeycote family name. Ben's possession of one painting makes him an insufferable thorn in her side-and yet he may be her best chance at finding the canvas's companion. As she becomes drawn to the dark-tempered earl, can Daphne risk laying bare the secrets of her heart?

Anne Barton began swiping romance novels off her mom's bookshelf as a teenager, so when she had the chance to spend a semester in London-home to her favorite heroes-she packed her bags and promptly fell in love with the city, its history, and its pubs. She dreamed of writing romance, but somehow ended up a software analyst instead.

Fortunately, a few years and a few careers later, Anne found her way back to writing the stories she loves and in 2011 won the Romance Writers of America's Golden Heart® for Regency Historical Romance. She lives in Maryland with her husband (who, sadly, is not a peer of the realm-but a great guy nonetheless) and her three children, who try valiantly not to roll their eyes whenever she quotes Jane Austen. Her weaknesses include reality TV, cute-but-impractical shoes, and caffeinated beverages of all kinds. Connect with Anne online at Facebook and Twitter.

I enjoyed researching Regency Christmas traditions for Never Desire a Duke. Christmas, in that time period, was much more low key than what we celebrate now. Instead of putting up gobs of decorations, and spending too much money on gifts, and being subjected to in-your-face marketing at every turn, a Regency Christmas usually meant a gathering of family and friends for a time spent together and a nicer than usual meal. Those celebrating might attend a church service, or undertake to do some sort of charity for those less fortunate. There were traditions like mistletoe and the kissing bough, and waits (or carolers) might come around and offer a song. All in all, I really liked the simplicity of Christmas in those days and that it was more focused on people than “stuff”. 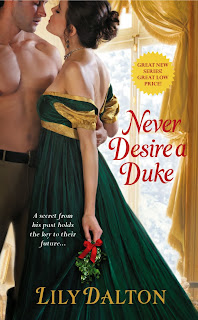 A Marriage Beyond Hope
Lady Sophia has long been estranged from her husband, Vane Barwick, the Duke of Claxton, whose rumored list of amorous conquests includes almost every beautiful woman of the ton. Yet a shocking encounter with him in a crowded ballroom-and a single touch-are all it takes to reawaken her furious passion for him. But how can she trust the man who crushed her dreams and took away the one thing she wanted most?
A Love Beyond Reason
Claxton has never forgiven himself for the youthful mistake that ruined his marriage to Sophia. Now, after nearly a year abroad, the reformed rogue vows to win back the only woman he's ever truly loved. He'll do whatever it takes to prove he can be the honorable husband she deserves-and the passionate lover she desires. As the snowdrifts deepen outside their ancestral home, can they rekindle the flame that burned so bright and find a new path to forever?

Lily Dalton grew up as an Army brat, moving from place to place. Her first stop after relocating was always the local library, where she could hang out with familiar friends: Books! Lily has an English degree from Texas A & M University and after graduation worked as a legal assistant in the fields of accident reconstruction and litigation. She now lives in Houston, Texas, with her family. When she isn't at work on her next manuscript, she spends her time trying out new recipes, cheering on her favorite Texas football teams and collecting old dishes, vintage linens and other fine "junque" from thrift stores and flea markets.  Connect online with Lily at Facebook and Twitter.

Readers, tell us about some of the most interesting things you've learned from reading historical romances.  One randomly chosen person leaving a comment on this blog before Friday, October 18th (Midnight EST) will receive all five of the books shown above, courtesy of Forever Romance.