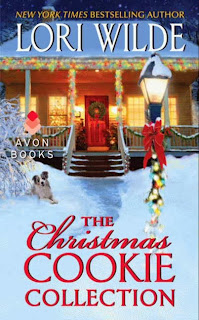 The Christmas Cookie Collection is a quartet of stories set in Twilight, Texas, the setting of Lori Wilde’s earlier quartet: The Sweethearts’ Knitting Club (2009), The True Love Quilting Club (2010), The First Love Cookie Club (2010), and The Welcome Home Garden Club (2011). All of the protagonists from the Christmas collection appear in the earlier books. Readers familiar with the series will remember the legend of reunited lovers and happily ever afters that is central to Twilight’s identity. There's another legend in Twilight, Texas that says if on Christmas you sleep with kismet cookies under your pillow and dream of your one true love, he will be your destiny.
Carrie, Raylene, Christine, and Flynn are all members of the Christmas Cookie Club, and this Christmas their dreams will come true.

Eight years ago, on Christmas, Carrie MacGregor and Mark Leland, high school sweethearts, eloped to Las Vegas. When they returned home to Twilight, Mark’s parents and Carrie’s older sister persuaded the teenagers that they should annul their marriage. Carrie threw more pennies than she could count into the legendary fountain that was supposed to assure her a happy ending with Mark, but she has never heard from him since the day they parted.

But that’s about to change. Mark, now host of a reality, myth-bursting show Fact or Fiction, is returning to Twilight to check out the facts of the town’s greatest legend. Will the hometown hero destroy the town? An even more important question may be whether the legend’s power will work for the hero and his heroine. The chemistry between Mark and Carrie is as explosive as ever, but can an L. A. star and a small-town girl really reunite for Christmas and for their own HEA?

Raylene Pringle has made Elvis’s “Blue Christmas” the most played Christmas song at the Horny Toad Tavern, which she has been running alone since Earl, her high school sweetheart and husband of thirty-five years left her a year ago. He left after Raylene revealed that before their marriage, during the last time she and Earl split, she had had a fling with a Dallas Cowboy quarterback, given birth to a daughter from that affair, and given the child to the wealthy parents of her lover. Earl can’t forgive Raylene for keeping that information from him, and he leaves. Raylene hasn’t heard from him in a year, and now she has two losses to keep her blue: the daughter she never knew and the love of her life who has disappeared.

Earl may not have contacted Raylene, but he has contacted Shannon Dugan, who shows up incognito in Twilight, still reeling from the shocks she received Christmas a year ago: her grandfather died, her husband turned out to be a crook who stole her money, and Earl Pringle brought her the news that her birth mother could be found in Twilight, Texas. Shannon comes to Twilight looking for answers, and she finds them. In fact, she finds more than she thought possible in retired Navy SEAL, Nate Devers. In a season of love and grace, is there enough of both to reconcile a mother and daughter and two older lovers who have lost their way?

Christine Noble may bake the most delectable Christmas cookies that the citizens of Twilight have ever tasted, but that’s not much consolation when she thinks of all that’s lacking in her life, big things like true love and a family. The accident that ended Christine’s dreams becoming an Olympic sprinter also left her unable to bear children, and every man in whom she has developed an interest has disappeared when Christine shared that news with him. Christine knows she has a lot to be thankful for, but that knowledge doesn’t help her with the self-pity and envy when she sees all her friends with the children in their lives.

Widower Eli Borden drives over from Jubilee to order what he has been assured is the best birthday cake available for his teenage daughter Sierra. He doesn’t know that the baker is Christine with whom he shared an unforgettable kiss when they were only a bit older than his daughter. Seeing Christine again has him feeling emotions he hasn’t felt since his wife died. But he doubts that a widower with four kids is the stuff of romantic dreams. Of course he doesn’t know Christine remembers him as the best kisser in her life or that he is exactly the man to fulfill her dreams of the perfect Christmas and maybe a happily ever after.

Flynn and Jesse Calloway, who were the heroine and hero of the first Twilight, Texas, book, are getting ready to welcome their first child. They have just completed a Christmas delivery that leaves them feeling filled with the joy of the season when Jesse’s past separates them again. It’s a brief separation, but it’s long enough for Flynn to run into danger. But Jesse’s love, a mysterious stray dog, and a Christmas miracle brings them safely past the danger. They name their Christmas miracle “Grace.”

These stories are short and predictable, and they won’t win any awards for originality or complexity. Nevertheless, they are guaranteed to evoke lots of smiles and a tear or two, and the recurring themes of forgiveness and love seem particularly appropriate in holiday stories. Readers who have enjoyed Wilde’s other Twilight books will appreciate the community feel, the familiar characters, and the unabashed sentiment of these novellas. Readers new to Wilde may well find that these sweet bites with a touch of spice will inspire them to feast on the other books in the series.

The first three stories were published in 2011 by Avon Impulse, a digital only imprint. This year Avon has released them in print with a fourth story added. For readers who purchased the Christmas Cookie Chronicles last year, the fourth story “Grace” is available as a digital single.