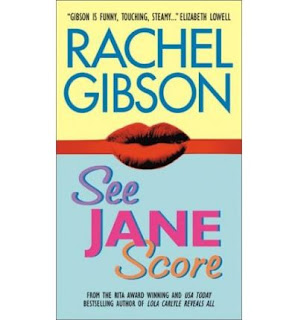 Are you a fan of sports romances? When I started writing romance, I targeted Harlequin and the wisdom back then (the 1980s and 1990s) was that sports romances don't sell.

Hmm, not sure if that's the case anymore. I've noticed that it's a growing genre!

It's weird that I'm so fond of these stories. I'm not a huge sports fan, but I love a good romance set in the world of elite athletes and the women who tame them. Football definitely isn't my thing, for example, but I'd crawl on hands and knees over broken glass to get the latest Susan Elizabeth Phillips Chicago Stars book.

I'm particularly looking forward to my Bandita Buddy Anna Sugden's debut with Harlequin SuperRomance, A PERFECT DISTRACTION set around Anna's beloved hockey players. I'm writing this review a bit ahead of time so I still have a couple of months to wait for Anna's first book!

So while I'm waiting, I picked up Rachel Gibson's SEE JANE SCORE, book 2 of her Seattle Chinooks series (book 1 is SIMPLY IRRESISTIBLE which has now joined my TBR pile after I had such fun with Jane).

Unfortunately, the team doesn't want her along. They go out of their way to isolate her, stymie her reporting efforts, and make her feel uncomfortable - there are a couple of very funny scenes when Jane forces her way into the locker room after a game. Jane's particular bugbear is highly paid French Canadian goalie Luc Martineau. As far as Jane's concerned, Luc's good looks are only skin deep. Which is a pity when she develops a Mount Rainier size crush on him, despite her poor opinion of his behavior and his principles.

Luc is a man on a mission. He's on the comeback trail after injury and a pain medication addiction. He knows that as he's now in his thirties, his place with the Chinooks is his last chance to make it big in hockey. Not only that, he's struggling to make a home for a much younger sister who treats him as a hostile stranger. With all this going on, the last thing he wants or needs is a smart-mouthed, prickly, repressed (he has no idea she writes erotica!) woman who rubs him up the wrong way but who he can't get out of his head.

Yep, you got it. This is an attraction of opposites romance. I always enjoy those. I love it when people who outwardly have nothing in common end up making huge beneficial changes in the other person's life. I love watching the hero and heroine fall in love, usually gradually and always against their will with the last person they ever thought they'd want. I love the way this particular trope lends itself to clever, snarky dialogue. SEE JANE SCORE definitely 'scores' in the dialogue department. You'll find yourself laughing out loud as Jane and Luc battle desperately to put the other person in their place - which as far as each of them is concerned is on the next continent.

I mentioned a few surprises along the way. I won't spoil the story by listing them, but one of the many things I really liked is that, unlike the pattern of many sports stories, Luc is pretty together, it's Jane who needs to undergo the biggest life lessons. Often in these books, the males are the wild cards, but in this case, Luc's already undergone his baptism of fire with all he went through before joining the Chinooks. He's refreshingly sensible for a romance hero!

As you can probably gather, Jane scored a hit for me. I suspect she would for you too!

So are you a fan of sports stories? Any favorites? Any theories as to why they're flavor of the month now, whereas ten or so years ago, they were a hard sell?
Posted by Anna Campbell at 12:00 AM