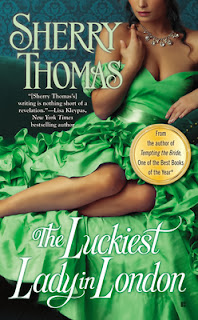 Felix Rivendale, Marquess of Wrenworth, is the perfect gentleman to the finest detail, but he is not real. He is all image, carefully constructed by a young man scarred by a loveless childhood and determined to maintain emotional distance even as he wins the affection and admiration of London’s elite. When he finds himself orphaned at seventeen, he makes his plans accordingly.

He planned to eclipse her in both acclaim and influence – a fitting tribute from the son for whom she had so little regard.

As for his father, Felix’s tribute to him would be to never repeat the man’s great mistake of loving with all his heart and soul. Friendship he would permit, and perhaps some mild affection. Love, however, was out of the question.

Love made one powerless. And he had had enough powerlessness to last ten lifetimes. In this new life of his, he would always hold all the power.

Every move Wrenworth makes is planned to elicit exactly the response he desires, and he glories in the fact that everyone is ignorant of the cold, manipulative mind at work behind the façade of perfection. But he also becomes bored with the perfection of his pretense and a bit disappointed that no one has the wit to penetrate his disguise. Then he meets Louisa Cantwell.

Louisa Cantwell lacks beauty, wealth, and family connections, but she is intelligent, pragmatic, and highly motivated to find a wealthy husband. She has always known that her mother’s small income will cease at her death, and Louisa and her sisters will be dependent upon their own resources, which essentially are non-existent. Louisa accepts quite stoically that she must marry well in order to provide for her sisters. She has no illusions about her situation, and she plans competently and sets realistic goals. She studies the social world like a textbook, and she learns to make the most of what she has. Her teeth are crooked, so she learns to smile without showing them. She is small bosomed, but bust enhancements can work wonders. She learns to create the impression of beauty without being beautiful. She is struck by the uncommon good looks of Wrenworth and recognizes her instinctive response to his appeal, but she knows he is far above her touch. She is also almost instantly aware that he sees through the front she has so painstakingly created.

Wrenworth, in his turn, is reluctantly fascinated by this woman who clearly is attracted to him but who is able to control the attraction.

She wasn't so good an actor that he couldn't see through her pretense at fifty paces. She was, however, good enough that he'd been slightly surprised at the transparency of her infatuation. When their gaze had met for the first time, he had almost heard the wedding bells ringing in her ears.
Then it dissipated into thin air - not just the look, but the infatuation itself. And that had firmly caught his attention.

At first, he plans to make her his mistress until his fascination exhausts itself. When she rejects him, he does something he never expected to do: he asks her to become his wife. Even though Wrenworth is far wealthier than the men Louisa had chosen as potential husbands, she knows he is dangerous to her, a man she can never truly trust or fully know.  Despite reservations on both their parts, they marry. Then things get really interesting.

I start anticipating the next Sherry Thomas book as soon as I turn the last page on the current one, but my anticipation ratcheted up tremendously when I read the following paragraph on Thomas’s blog:

The Luckiest Lady owes its genesis to The Lord of Scoundrels.  I read the book late in the previous century and thought to myself, Hmm, what if, after a pretty horrendous childhood, instead of turning into Lord of Scoundrels, a man turned into The Ideal Gentleman instead?  Two sides of the same coin, right?

Lord of Scoundrels is high on my list of all-time favorite romance novels, and I adore Dain. I’m also a believer in the wonder of stories that begin with what ifs. So I was incredibly eager to read this book. But my first reaction was disappointment. I understood the hero’s motivation, I found the hero fascinating, but I didn’t like him very much until I was well into the book. No doubt my response was due in part to the enthusiasm with which I embraced Thomas’s Fitzhugh trilogy. If I say that I’ve read it three times already and fully expect to read it again, you will have some idea of how much I love that series. It was a tough act to follow. But when I reread The Luckiest Lady in London, I discovered that my response to Wrenworth in a sense mirrored Louisa’s, and maybe I was reacting just as Thomas planned for her readers to react.

At any rate, by the second reading, I was able to appreciate Wrenworth more fully as a character who is a maelstrom of emotions that he devotes his considerable will to controlling. His fascination with Louisa renders him vulnerable to her and threatens his control. Small wonder that his fear of her is equal to his desire for her. It is rare to see a hero and heroine who mirror one another’s complexities to the degree that Wrenworth and Louisa do. She is as intelligent and self-controlled as he is, and she recognizes and accepts her passionate nature. And by “passionate” here, certainly I include her desire for Wrenworth, but I also include other things that matter to her. The scenes between these two are sometimes witty and amusing and sometimes darkly sensual, but they are always credible and riveting because Thomas makes the reader believe in these two characters and who they are separately and together.

Another thing at which Thomas excels is her ability to capture the power of that first moment of attraction so that the reader experiences it on an almost visceral level. These are Louisa’s thoughts on meeting Wrenworth:

It was difficult to draw breath. Her heart palpitated in both pleasure and panic. And she flushed furiously, too much heat pulsing through her veins for her to control or disguise.

A heartbeat later, however, she was cold. She could not say how she knew it, Lord Wrenworth having been nothing but flawlessly courteous. All the same, she was suddenly dead certain that on the inside, he found her patently ridiculous, perhaps even laughable.

I hope the quotations I have included are sufficient to show you Thomas’s masterful command of prose. Her ability to use words that have the depth and flavor and richness of a glass of truly excellent wine is always one of the joys of reading—and rereading—her books. If you too value beautiful prose, intelligent and complex characters, and a story that will engage your heart and your mind, I highly recommend The Luckiest Lady in London. And if this should be your first Sherry Thomas book, I envy you the delight of a backlist that stands with the best in the romance genre.