Review - - It Started with a Scandal 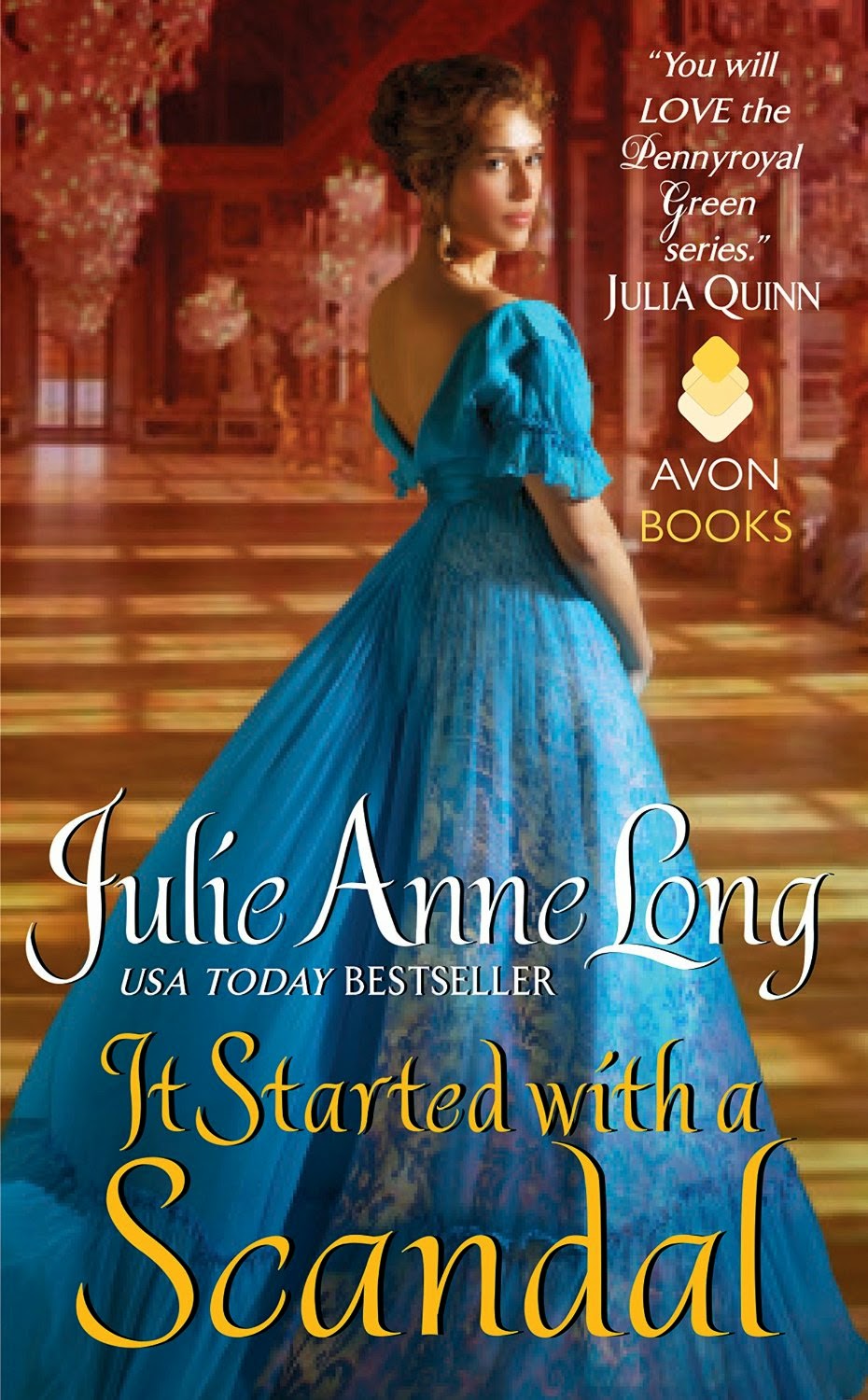 Philippe Lavay, Prince of the House of Bourbon, barely escaped with his life when he was attacked by a gang of six cutthroats determined to end his work for the English Crown. He has come to Pennyroyal Green, home of his close friends the Earl of Ardmay and his countess, the former Violet Redmond (I Kissed an Earl), to recover from his wounds and to consider options for his future. Since his uncertain temper encourages brief tenures for the servants he hires, he is in dire need of a housekeeper to restore order to his chaotic household and not incidentally to make Lavay’s recuperation somewhat more bearable.

Enter Elise Fountain. Elise, the unmarried mother of a six-year-old son, lost both her home and her livelihood when the vindictiveness of a student’s sister forced Miss Endicott of Miss Endicott’s School for Girls to fire Elise, albeit reluctantly. Favors were called in and Redmond influence secured Elise an interview for the position of Lavay’s housekeeper. She refuses to be intimidated—at least visibly--by her own lack of experience or by the surly nobleman with a reputation for throwing objects at his housekeepers. When Lavay questions her about her qualifications, she responds,

“I’ve taught classrooms full of unruly children possessed of a variety of natures, and I know how to make them listen and learn and like it. I understand the concerns and politics of household staff and am prepared to address and manage them. I have experienced a number of, shall we say, economic conditions, and can adjust to any of them. I am scrupulously organized. All in all I have a very good brain. And I am afraid of nothing.”

Of course she does have fears, and one of them is the fear of not securing the position she needs desperately.

Despite her calm façade, Lavay recognizes her desperation. He also recognizes her breeding and her pride. He offers her the housekeeper’s job on a two-week trial. In the weeks that follow, Elise transforms Lavay’s home and his life. Untrimmed candles, inadequate fires, and layers of dust have been the norm as lazy servants neglected their responsibilities and waited for the temporary tenant to leave. Elise organizes the servants, challenges them, appeals to their pride and soon has them working diligently, except for the fierce, thieving cook whom Elise fires but not before rescuing the treasures the cook has stolen from Lavay. He cannot ignore the newly industrious servants, the clean and shining house, or the plentiful apple tarts that are Elise’s specialty. Neither can he ignore Elise. In fact, his awareness of her increases with every contact, and he cannot resist ringing the bell that ensures their contacts are frequent. Elise is no less aware of him. “"Why make me a woman, why make him a man, why make him charming, why make it such a pleasure to touch him, why must it feel as though I'm touching flame, why must I be tempted like this?” she questions.

This unlikely pair is surprisingly similar. Both have lost their homes and family members, and both are unalterably committed to protecting their surviving family. But the gap between a French aristocrat and his housekeeper is huge, and class difference is not the only obstacle between them. Lavay has devoted his life to restoring the property his family lost in the French Revolution so that his grandfather and his younger sister can live the life to which their birth entitles them, and he must act quickly to secure the family estate before it is sold to the highest bidder. Such action requires an immediate and sizeable infusion of funds. Since his injuries make returning to the dangerous work that almost killed him a foolish risk, he is left with the option of marriage to an old friend who is willing to exchange her family’s wealth for his family’s status. Elise, having been abandoned by her son’s father and disowned by her parents, is wary of relationships and ever conscious of her responsibility to avoid anything that would make her son’s life more difficult. Passion and love, powerful as they are, cannot erase these barriers.

I admit to being a Julie Anne Long fan from her debut book on and to waiting impatiently for the next Pennyroyal Green book since I read the first one in the series. But It Started with a Scandal exceeded even my high expectations. It is an extraordinary book. Lavay in this book, wounded in body and spirit, is a more complex and substantive character than a reader encountering him as a handsome charmer with a dangerous edge in I Kissed an Earl would have guessed. Elise is the kind of strong heroine I most admire, one whose strength stems from her growth, her tenacity, and her ability to prevail against the odds. Long has a gift for capturing her reader’s interest in a few words that offer a compelling invitation to discover more about the characters, and she uses that gift to its full potential in this book.  Lavay is “not so much rough-hewn as sleek and hard as a rock polished over and over by wave after wave of time and experience.” Elise’s life as housekeeper and mother is “stitched together by an intricate network of barters and favors of time and skill and knowledge, of baked goods and canned goods, unused bolts of cloth and hand-me-downs, and herbs and cheeses and books and advice and tutoring.” If Lavay and Elise are fascinating as individuals, they are even more so as a couple. This book could serve as a textbook for aspiring romance writers who need to study how to maintain sexual tension. The pages almost smoke although consummation scenes are few.

Secondary characters are also vividly drawn. Young Jack is an engaging mix of energy, imagination, curiosity, vulnerability, and love. Some of my favorite scenes are those between him and his “Giant” as he claims his own place in Lavay’s heart. Seamus Duggan, whom some readers will remember as the heroine’s brother in A Notorious Countess Confesses, is an Irish rogue with a good heart and a touch of melancholy. And Everseas and Redmonds make brief appearances and are alluded to in scattered references that range from Jack’s affection for “The Ballad of Colin Eversea” to an act by Lavay that sets up The Legend of Lyon Redmond, the eleventh book that will be released September 29, 2015.

I give It Started with a Scandal my highest recommendation. It is one of the best books in one of the best series in historical romance fiction. If you enjoy historical romance with characters who jump off the page and into your mind and heart and story lines that demand your investment, you owe it to yourself to read this book. I plan to reread it just as soon as I add it to my short list of the Best of 2015.