Review - - Anything for You

Anything for You
By Kristan Higgins
Publisher: Harlequin
Release Date: December 29, 2015 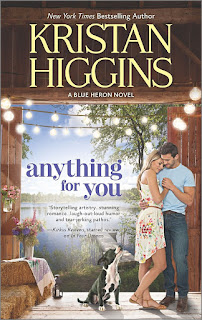 Countless romance novels end with a proposal, but this fifth novel in Kristan Higgins’s popular Blue Heron series begins with one. Connor O’Rourke and Jessica Dunn have spent years in an on-again, off-again relationship. Connor believes it is past time they made it permanent, and he is prepared with candlelight and champagne, the perfect ring for his gorgeous Jessica, and the traditional beseeching-male position on one knee. He is not prepared to hear Jessica respond, “Get up, doofus.”  If Jess is saying no to his proposal, then Connor is saying no to them. He will no longer accept their limited, secretive relationship. So the on-again is off-again, permanently this time. Or is it?

“Complicated” might be an understatement when it comes to this relationship. First, Connor and Jessica have a twenty-year history. Connor, a son of privilege, fell in love with Jessica, child of the bottom tier of “trailer trash,” when he was twelve. As if the class differences were not conflict enough for first love, there is the issue of the dog. One day as twelve-year-old Connor and Colleen, his twin (who got her HEA in a reunion romance in Waiting on You, 2014) were riding their bikes, Chico, a pit bull belonging to the Dunns, attacked Connor, mauling him badly. Connor ends up in the hospital with thirty-five stitches, and both he and Colleen, who saw the attack, are traumatized by the event. So is Davey, Jessica’s special-needs younger brother, who can only understand that the dog he loved has been taken away because of Connor. Davey does not understand the danger Connor was in or the combination of Connor’s father’s fury and power. He views Connor as Chico’s killer, and he hates and fears him.

In high school, Jessica is a wild child whose rumored promiscuity leads to her nickname, Jessica Does. But she stays away from Connor. Nevertheless,  from Connor’s perspective, there is an unrecognized bond: “Even so, it felt as if an invisible copper wire connected them, occasionally flaring with electricity and light.” Several years after high school, when Jess’s boss pays for her to take a one-day wine class at the Culinary Institute of America, Connor, in his senior year at the institute, teaches the class. They connect briefly, but the connection is shattered in a heartbreaking moment. Two years later, Connor has returned to Manningsport to open O’Rourke’s with Colleen. Jessica, whose hard work and upward mobility have gone a long way toward redeeming her reputation and improving her self-esteem, forgives Connor and they try again. However, Jessica has assumed responsibility for Davey, and Davey’s hysterical reaction to Connor convinces her that Davey and Connor cannot co-exist.

The pattern is set. They reunite for weeks or months, but each time some emergency in Jessica’s life signals that it is time to break-up. But Davey is as much excuse as reason. The truth is that Jessica does not trust Connor’s love for her. She believes that she herself is the only person on whom she can depend. Until she can conquer her fears and believe in Connor and her own self-worth, she can never find the life of which she dreams.

I’m not generally a fan of this kind of up and down romance, but Kristan Higgins can sell me on most any story line. Connor, of course, is an easy sale. He not only rivals movie hunks in the looks department, but he also loves his mother and sisters, cooks like a dream, and possesses a wicked sense of humor and superior nurturing skills. Granted he can be insensitive at times, perhaps verging on the downright stupid at least once, but who wants a perfect hero? Prickly Jessica may be more difficult to like, but rather than feeling irritated with her inability to trust Connor and commit to him, I felt sympathy for her. Higgins shows the reader why Jess is so reluctant to believe in Connor’s love and why she clings to her pride and determination to save herself with help from no one. There are too many poignant moments to list, but Jess’s vulnerability when she admits to herself how weary she is of the burden of her past left me misty-eyed: “She was so tired of being Jessica Does. So tired of being afraid and alone and taking care of everything all the time. She just wanted to be. To be normal, to be happy, to be light.”

In addition to the leads, Davey is an unforgettable character. Higgins does a superb job of capturing his limitations, his stubbornness, his volatility, and the toll his care takes on Jessica, emotionally, physically, and financially. But she also shows his capacity for love and the eternal childlikeness that make him endearing. The reader understands that Jessica’s feelings for her brother may include guilt, but her love for him is her primary motivation. For several reasons, I thought some of the most touching moments in the novel occurred during Connor’s efforts to establish a relationship with Davey. It is all the more remarkable that Higgins can weave this story with some painfully real dark threads without neglecting her trademark humor.

Higgins is one of the brightest stars in the galaxy of contemporary romance, and this is one of the best books in an extraordinary series—equally heart-wrenching and heartwarming. It made me cry; it made me laugh; it made me reorder my top ten romance reads of 2015. I give it my highest recommendation.

Email ThisBlogThis!Share to TwitterShare to FacebookShare to Pinterest
Labels: 5 Star Review, Anything for You, Contemporary Romance, Janga, Kristan Higgins