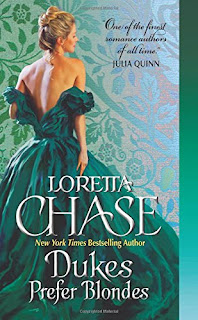 Lady Clara Fairfax is weary of turning down bi-weekly proposals from gentlemen who cannot see beyond her blonde beauty. She is equally weary of her mother’s spasms over an undutiful daughter’s refusal to choose a husband. Her work with the Milliners’ Society for the Education of Indigent Females, founded by the dressmaking Noirot sisters, one of whom is now Lady Clara’s sister-in-law, does give some meaning to her life. So when one of the most promising of the society’s girls needs help rescuing her young brother from a criminal street gang, Clara is determined to do her best. Smart and sensible enough to know that she can’t find the boy on her own, Lady Clara pays a visit to Oliver “Raven” Radford, a barrister with a reputation for being obnoxious and for advocating for pauper children.

Radford is the grandson of a duke, but Radford’s father, also a barrister, has kept his distance from his aristocratic family  and brought his son up outside the narrow world of the haut ton. Radford is his father’s son, confident in his knowledge with a finely honed legal mind, a well-developed social conscience, and a barely controlled impatience with the stupidity and banality of most people. Radford, who recognizes Lady Clara from a shared childhood experience, knows exactly the kind of sheltered life Lady Clara has led and how ignorant she is of the world into which the boy she is seeking has disappeared. He thinks her plan is hopeless, and he tells her so. But his determination not to get involved is no match for Lady Clara’s persistence or for his inability to ignore her beauty and her intelligence.

Lady Clara and Radford become contentious allies in the effort to find the missing boy. It is a dangerous task that exposes them to the dirt and disease of London’s underclass and to the enmity of one Jacob Freame, boss of a notorious street gang who is already planning Radford’s demise as payback for sending some of his minions to prison and some to death. But even those risks might not be as great as the one this lady and barrister are taking with their hearts.

Dukes Prefer Blondes is the fourth book in the Dressmaker series (Silk Is for Seduction, Scandal Wears Satin, and Vixen in Velvet), and Chase saved the best for last. Lady Clara, introduced in the first book as the woman the hero expected to marry, was one of those secondary characters so vital that she leaped off the page into readers’ hearts and imaginations. Chase fans have been hoping for Lady Clara’s story ever since, and I assure you that this one is well worth the wait. The only thing I didn’t love about Dukes Prefer Blondes is the title.

Lady Clara apparently has everything—beauty, social position, wealth, intelligence, a family that loves her, and gorgeous clothes. She understands that she is privileged, but she chafes against the restrictions imposed on her by the very privileges she enjoys. Her rebellions are carefully conceived to allow her to achieve her purposes without destroying her reputation or embarrassing her family. In one revealing conversation, she says to Radford:


“You’ve no notion how I live in the world you call a fantasy,” she went on in the same taut tone. “You’ve no idea what it’s like to spend your life wrapped in cotton wool, with all about you protecting you, mainly from yourself, because you don’t behave as they think a girl ought to do, and they believe something’s wrong with you. You don’t know what it’s like to watch your brothers go away to school and make new friends and have adventures you’ll never have, even vicariously, in books. You don’t know what it’s like to be scolded for reading too much and knowing too much – to be taught to hide your intelligence, because otherwise you’ll frighten the gentlemen away – to stifle your opinions, because ladies aren’t to have any opinions of their own, but must always defer to men.” She stamped her foot. “You know nothing about me. Nothing! Nothing!”

Radford rivals Chase’s best heroes, and that’s a big concession for me to make since half a dozen Chase heroes are in my personal Romance Heroes Hall of Fame. He is intimidatingly smart, and he does not suffer fools gladly. Yes, he is impatient and at times outright obnoxious, but he also has a saving sense of humor. And he is so clearly knocked for a dizzying, terrifying loop by his feelings for Lady Clara.


Clara’s face glowed, and her mouth turned up. The room brightened, as though the sun had contrived to force its way through both oppressive grey sky and sooty window.

There. That was it, in a nutshell. Infatuation or whatever it was, he knew he’d move heaven and earth to bring that light to her face, to awaken that smile and the glint of laughter in her blue eyes. He didn’t see how he could ever get used to it, let alone take it for granted.

Chase is known for her banter, and in this story, she creates the very best banter, the kind that is witty and scintillating and which the two people engaged in the exchange are clearly enjoying both as a duel of words and as a layered conversation with the unsaid as significant as the spoken.
Then there are the love scenes, tender and sensual and without even a tinge of the generically titillating. They are crafted for these two people, and they reveal to the reader who Clara and Raven are individually and as a couple. Given some books I read this year, I feel as if I owe Loretta Chase a thank you note.

If you are looking for historical romance with characters you will adore, a story rich in humor and high in tension, sexual and otherwise, and written in beautifully lucid prose, add this one to the top of your list. It’s on my Best of 2015 list, I’ve read it twice already, and I have plans to reread the full series. It seems redundant to say I give it my highest recommendation.